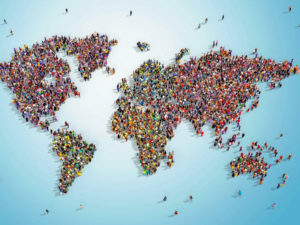 When will the largest number of people ever walk on planet Earth.

And what does it actually mean for Australia?

Firstly, the simple question is where do we get that population projection from?

These projections are the most famous middle scenario of their various scenarios.

Increasingly the other big demography centres across the world tend to disagree with that view, because we see that the nations of Africa, in particular, become richer and more educated at a faster rate than we previously expected, which drives down the fertility rate, and therefore those countries don't grow as fast as we expected.

So, therefore, Wittgenstein centre in Vienna, for example, expects peak humanity at under 10 billion people by 2070s — only 50 years from now.

We also have a couple of other projections that suspect peak humanity at around 9.4 billion people at some point in the 2060s.

So if you are under 40 today according to the latest projections there is a chance that you will see peak humanity, and that you will actually live at the declining, shrinking planet from a human population perspective.

For example,  if the overall planet starts to grow older we will then see a global fight or a competition for young talent because we need to make sure that the countries of this planet are young enough to afford to finance the retirement of the ever-growing share of the old folks.

That's difficult to achieve and we can look at famous examples such as Japan.

Japan managed to grow rich before they grew old, so that means that they now have enough money flowing around.

The Japanese also completely changed the social contract, which means they allow women to re-enter the workforce even after they got married, which wasn't the case for a long time.

And, of course, they doubled down on high-tech automation to make sure they can run an effective lucrative economy with an ever-shrinking pool of workers.

These are the trends that you will want to do as a country on a globally shrinking planet:

So there will be a growing share of poor people in Australia whose retirement does need to be financed through a pension scheme.

Therefore, we must not think that Superannuation will solve all of our problems just yet.

What's the most important subject in High School?

Why Millennials obsess about meaningful work