However, the trend shows the market is continuing to slowly lose momentum since moving through a peak monthly rate of growth in March 2021, when values were up 2.8%.

Across the broad regions of Australia, market conditions are starting to show some diversity. 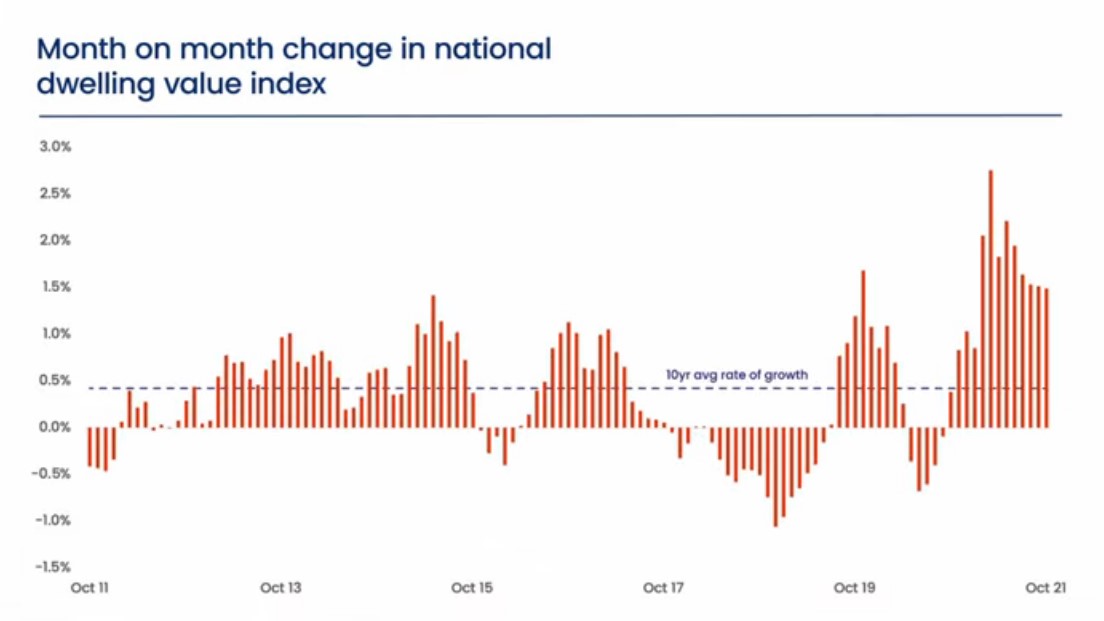 At the other end of the spectrum, Brisbane has taken over as the fastest-growing market with housing values up 2.5% in October.

This eas followed by Adelaide and Hobart, with both markets increasing 2.0% in value over the month.

In Sydney and Melbourne, the monthly rate of growth has more than halved since the highs seen in March 2021, when they reached a monthly growth rate of 3.7% and 2.4% respectively.

Across the regional markets, New South Wales and Queensland led the pace of capital gains while Western Australia was the only broad-based rest-of-state region to record a marginal fall in housing values. 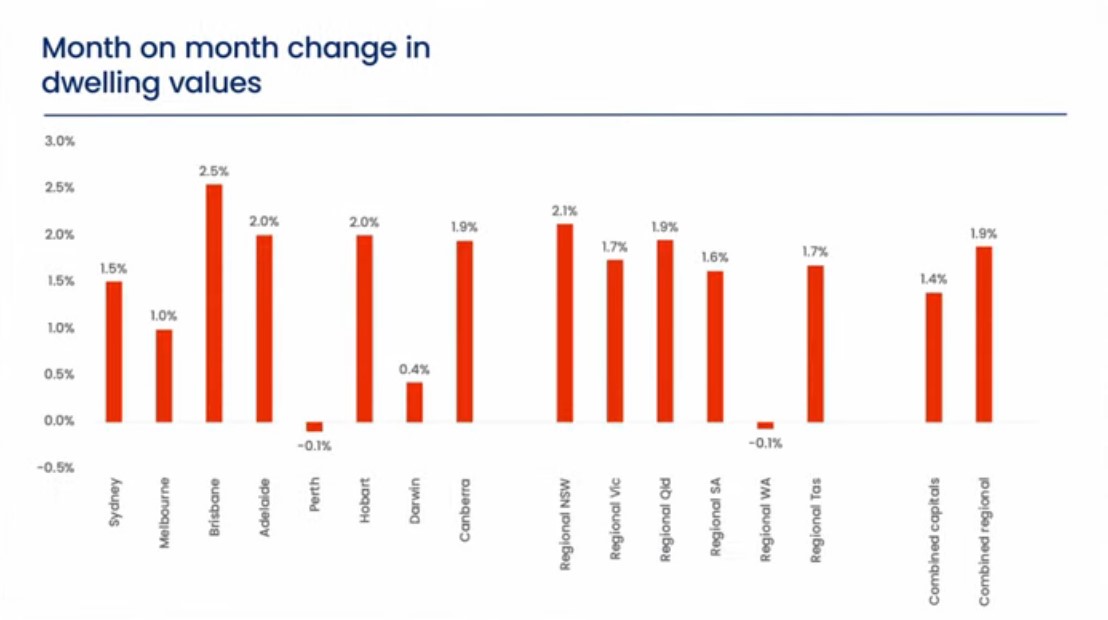 Housing prices continue to outpace wages by a ratio of about 12:1, which is one of the reasons why first home buyers are becoming a progressively smaller component of housing demand.

New listings have surged by 47% since the recent low in September and housing-focused stimulus such as the HomeBuilder grant and stamp duty concessions have now expired. 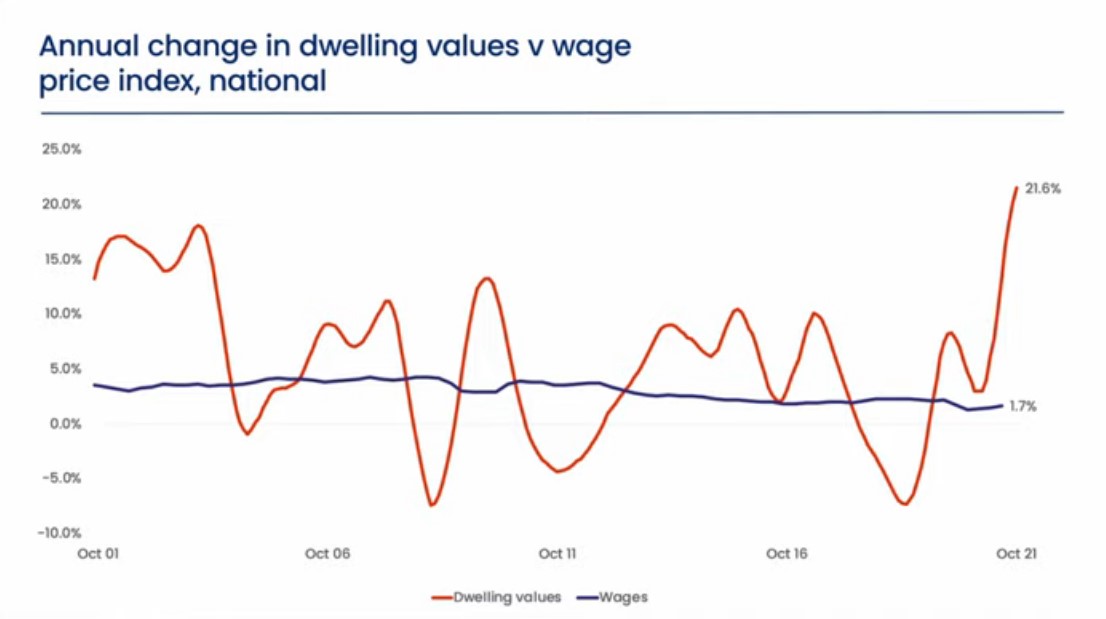 Combining these factors with the subtle tightening of credit assessments, which went live on November 1st, and it’s highly likely the housing market will continue to gradually lose momentum.

Although the monthly pace of growth is easing, the annual trend has continued to rise, which is a factor of the stronger growth conditions throughout early 2021. 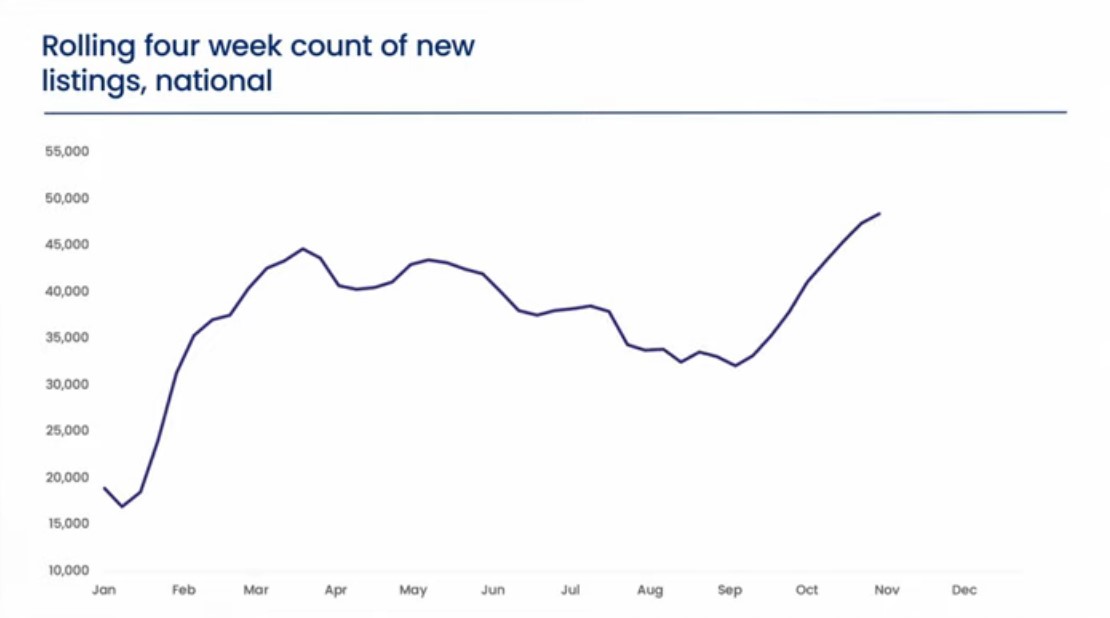 Nationally home values are up 21.6% over the year to October, with half the capitals recording an annual growth rate in excess of 20%.

Across the broad regions of Australia, regional Tasmania has led the nation to the pace of annual capital gains with dwelling values rising by 29.1%. 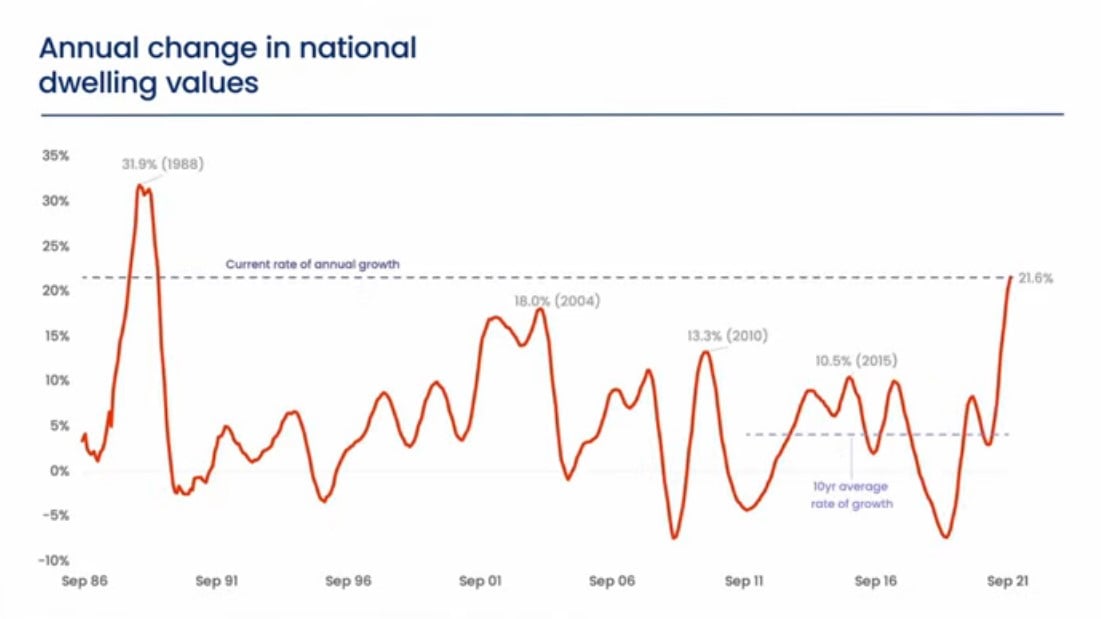 Unit markets have generally continued to record a lower rate of growth relative to houses, with this trend most evident in the annual results. This trend is less evident across regional areas of Australia where the performance gap between houses and units is relatively small.

As housing becomes less affordable, we expect to see more demand deflected towards the higher density sectors of the market, especially in Sydney where the gap between median house values and median unit values is now close to $500,000.

With investors becoming a larger component of new housing finance, we may see more demand flowing into medium and high-density properties. 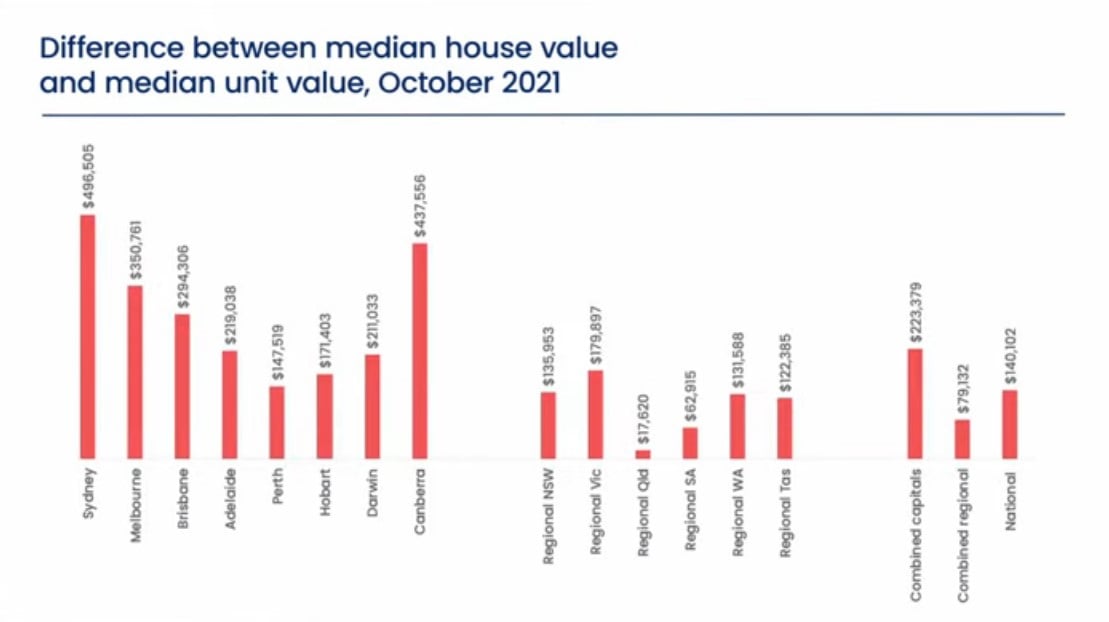 Additionally, investor demand across the unit sector could be bolstered as overseas borders open, which is likely to have a positive impact on rental demand, especially across inner-city units precincts.

From a supply perspective, property listings are finally starting to lift, albeit from an extremely low base.

Persistently low levels of housing inventory have been a central factor in the upwards pressure on housing prices. 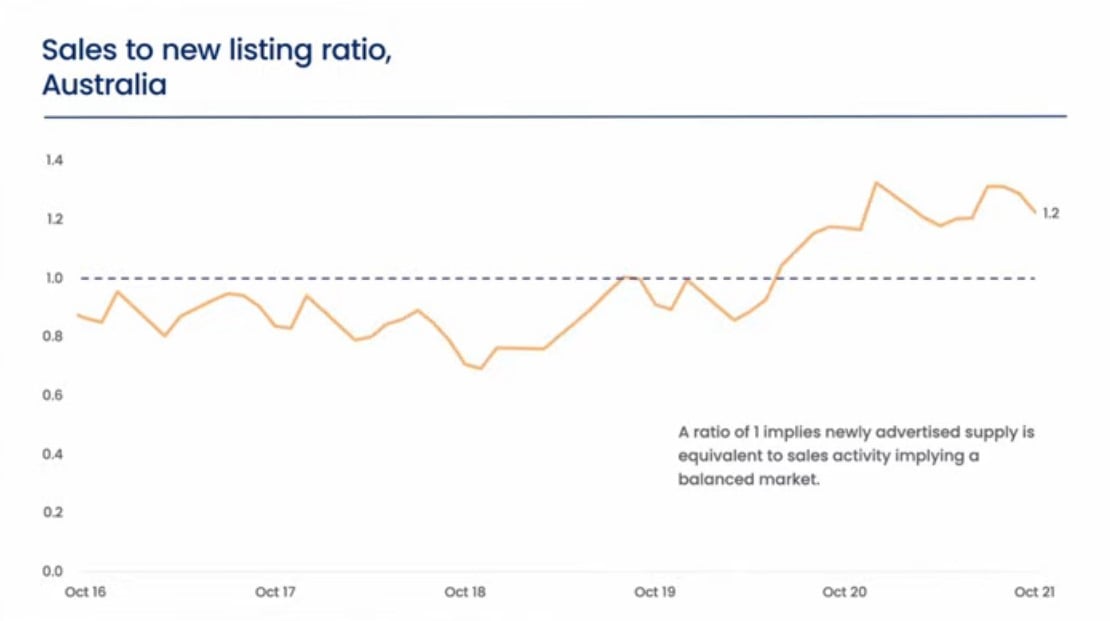 Vendors have enjoyed extremely strong selling conditions while buyers have had limited opportunities ti deliberate on a purchasing decision or negotiate on the price.

The rise in new listings has outweighed buyer demand, pushing the total number of houses and units available for sale to 141,786 properties; a 6.8% increase in active listings from the recent mid-September low. 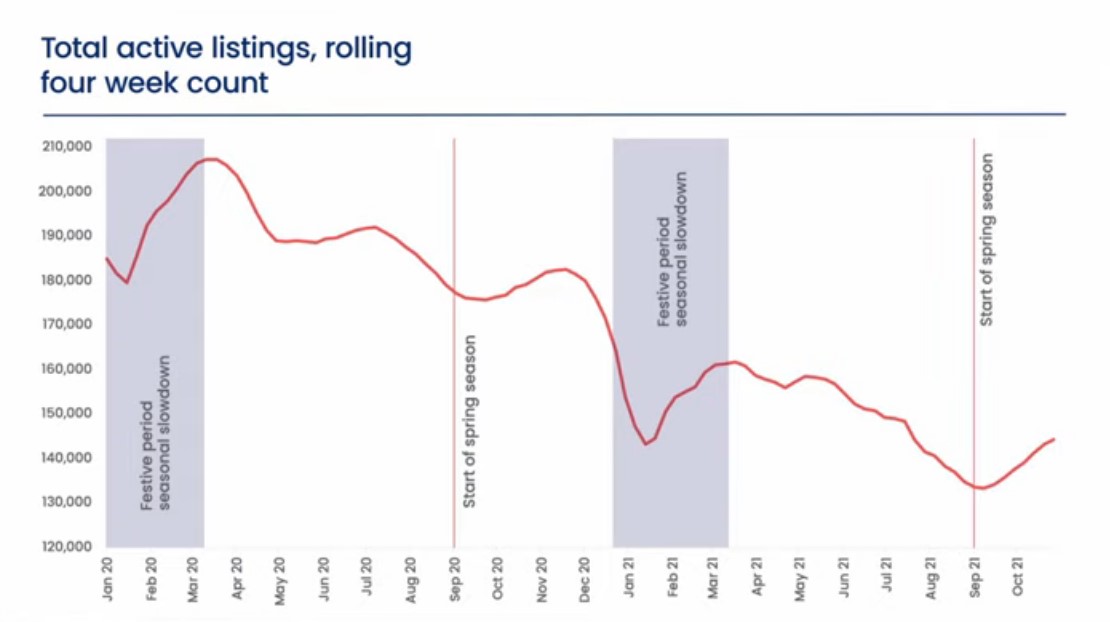 FOMO is likely to remain a feature of the market while listings remain far below average.

There is a good chance however, that advertised supply will rise further through spring and early summer which, due to worsening affordability and a subtle tightening in credit availability, may not be met by a commensurate lift in demand. 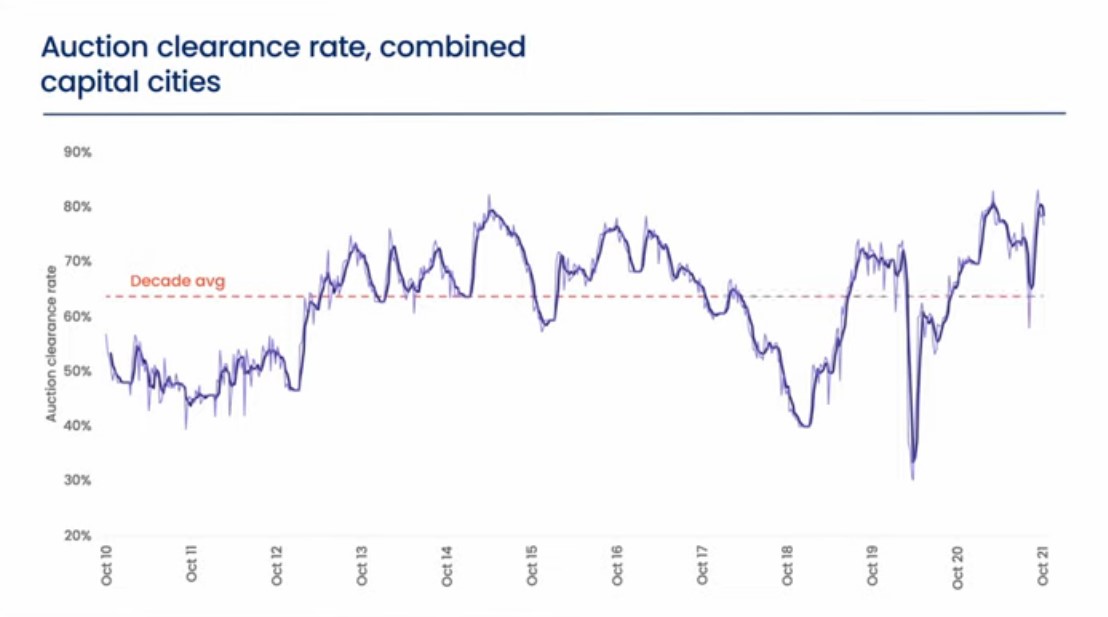 Vendor metrics such as auction clearance rates, days on market, and vendor discounting rates all remain at above-average levels, indicating this is still a sellers’ market, however, conditions may start to rebalance towards buyers later this year or early next year.