But I wouldn’t read to much into the lower clearance rates…just yet.

It’s common for auction clearance rates to ease over the concluding weeks of the year, driven down by higher listings providing more choice for buyers at a time when buyer interest typical slows just before Christmas.

And all the news about a possible new wave of Covid would not have helped.

This weekend 2,981 properties were scheduled for auction. This was considerably less that last weekend’s record of 3630.

Clearance rate have been slipping over the last few weekends, especially  in our two big auction markets – Sydney and Melbourne, however the markets were still relatively strong, the peaking of the property price boom cycle seems to be a factor now, with listings trending up and higher property prices pushing some buyers out of the market as affordability and borrowing restrictions come into play. 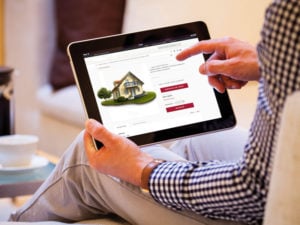 Dr. Andrew Wilson of My Housing Market reported Adelaide as the stand-out performer with a preliminary auction clearance rate of 92% from 180 auctions.

Other preliminary clearance rates (as reported by Dr. Andrew Wilson’s Auction Insider) were:-

On the last auction weekend for this year, Sydney hosted 1026 auctions.

As a result of the extra choice available, the preliminary auction clearance rate was 63.8% and, of course, this will be revised lower to around the high 50%’s as the remaining auction results are collected.

Last week, a final clearance rate for Sydney as reported by Domain was 58.2%.

This weekend 266 properties that were planned to be auctioned this weekend were withdrawn from sale – a sign of the abundant choice.

Realestate.com.au reported that there were also 1,727 private sales in New South Wales over the last week, quite a few more than the 1,632 private sales reported the week before; and of course, many off-market sales would not have been reported.

Sydney clearance rates down again as supply finally catches up with demand.

The Sydney auction market reported a record day for the final Saturday of the auction year, with the recent unprecedented flood of listings acting to bring down clearance rates as supply finally catches up with demand. 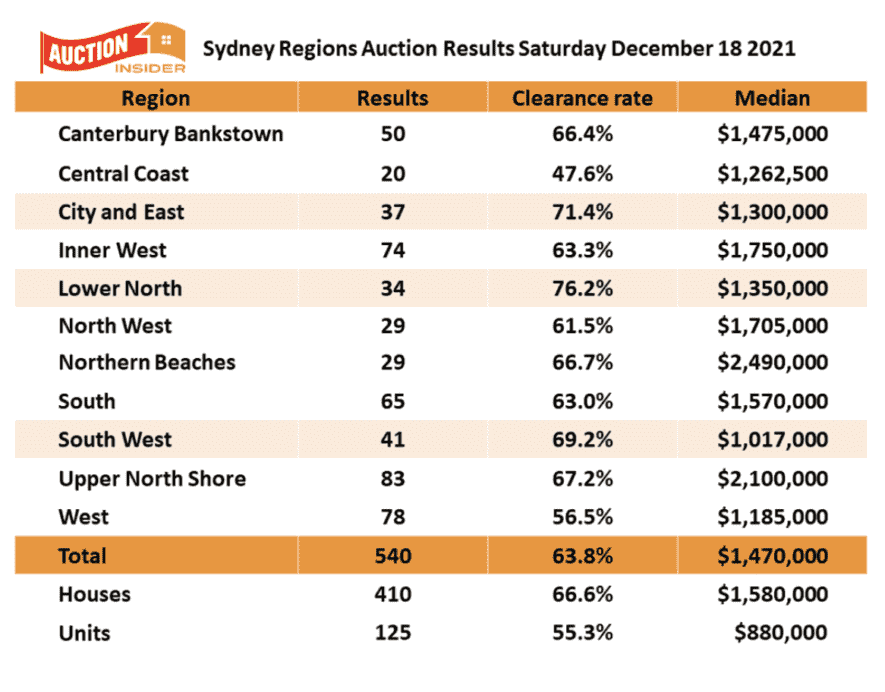 In Melbourne 1,480 properties were scheduled for auction this weekend – significantly less than the previous weekend’s all time record of 1,766

This caused the preliminary auction clearance rate in Melbourne to slip to 66.3% and, of course, this will be revised lower to the low 60%’s once the remaining auction results are collected.

Last week the final clearance rate for Melbourne as reported by Domain was 59%.

Only 209 properties were withdrawn from sale this weekend – a sign of the strength of the market; and these are counted as “passed in” meaning this will bring down the overall auction clearance rate.

Realestate.com.au reported that there were also 1461 private sales in Victoria in the last week; much the same as the previous week’s 1447

Melbourne’s weekend auction market has entered the air by reporting the highest number of listings for the final auction Saturday of the season, with 1480 homes scheduled for auction.

Clearance rates predictably eased as a consequence of the unprecedented listings, but remain generally in favour of sellers. 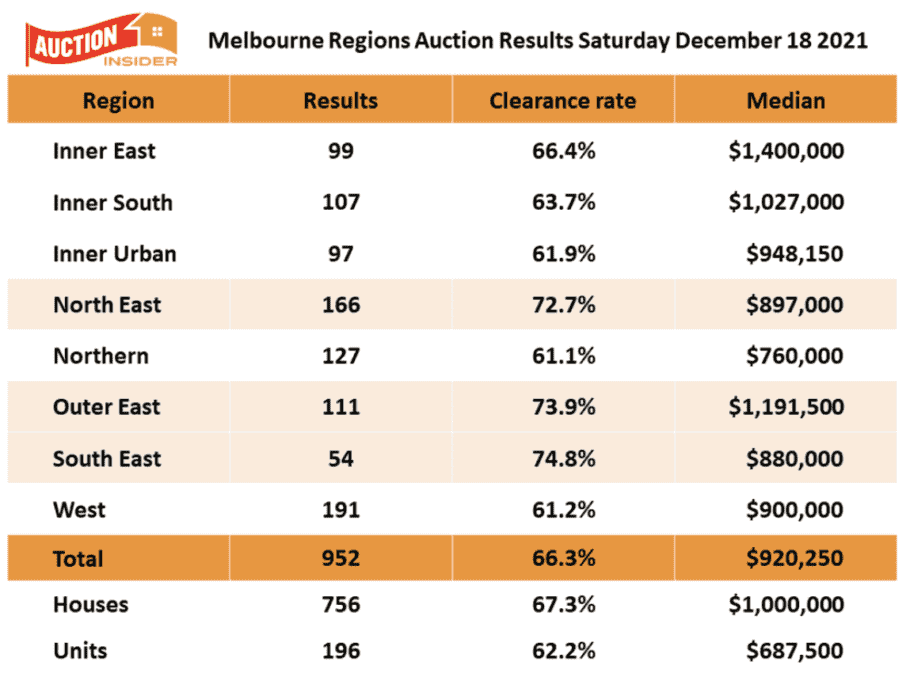 Here are the preliminary auction clearance rates as reported by Dr. Andrew Wilson

Extraordinary auction numbers however have continued to place downward pressure on clearance rates generally, with buyer power on the rise, particularly in Melbourne and Sydney. 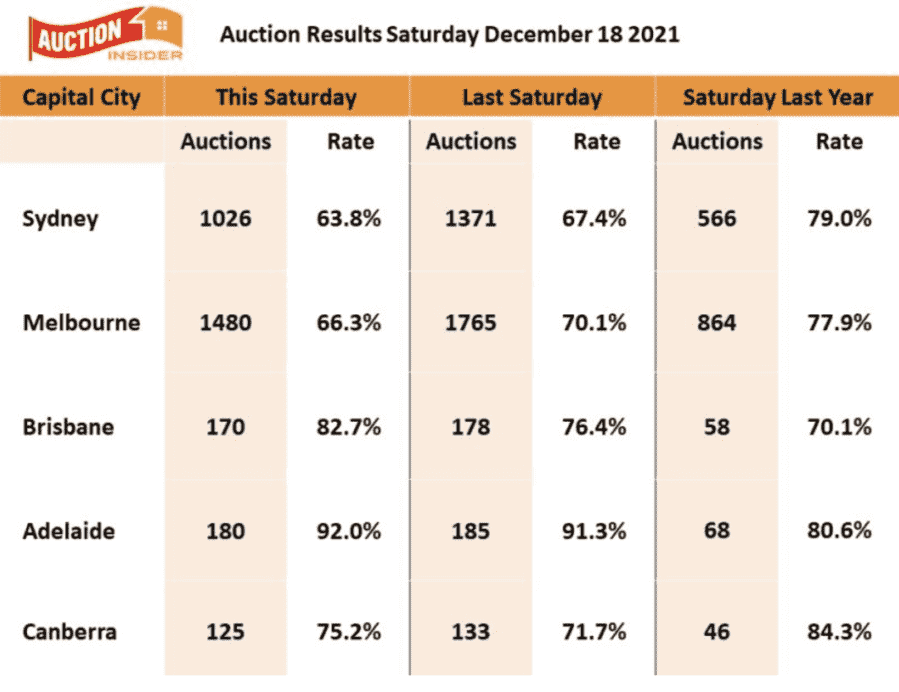 Extraordinary auction numbers however have continued to place downward pressure on clearance rates generally, with buyer power on the rise, particularly in Melbourne and Sydney

Auction markets are remaining resilient despite the higher number of properties put to auction this weekend.

The following charts from NAB and Corelogic also show the long-term auction clearance rate trend for our combined capital cities. 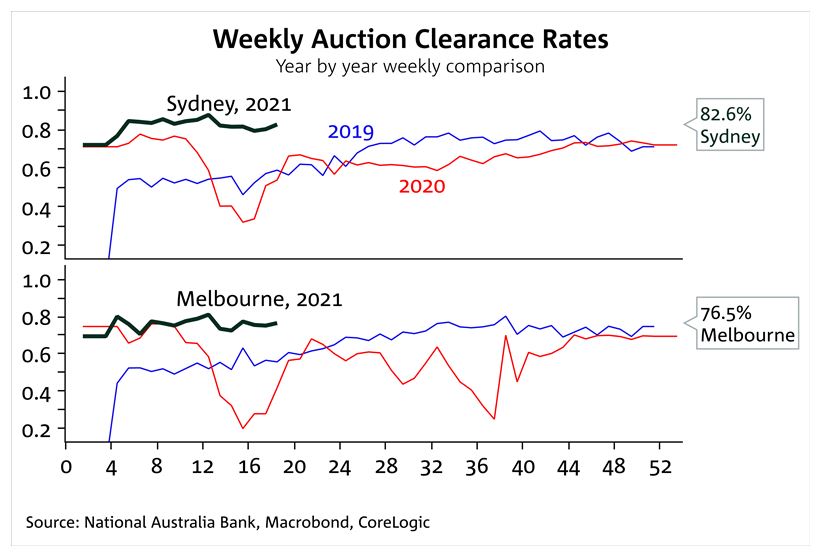 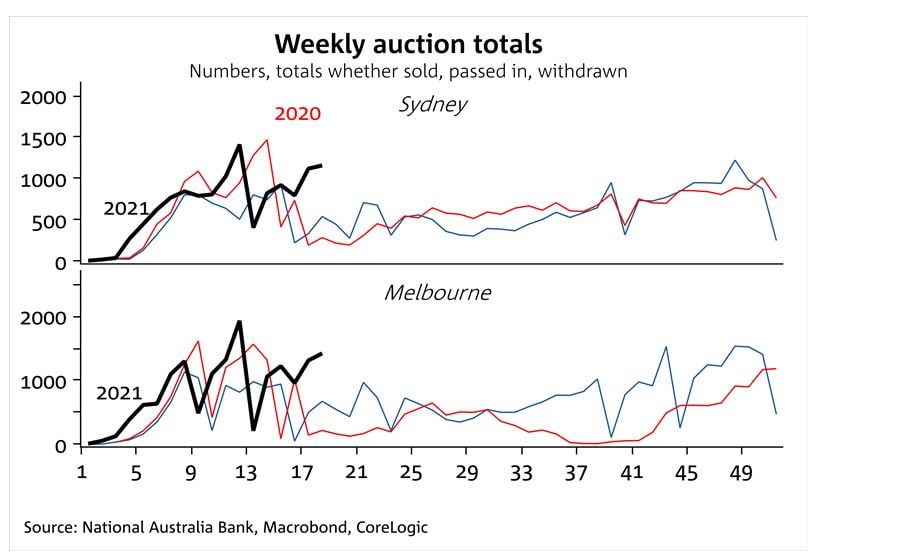