How much does a "typical" 4 bedroom home cost?

PropertyPricer has compared the value of a typical four-bedroom house across three states and 12 suburbs - with surprising results.

So what's a typical home?

Property Pricer measured and valued four bedrooms, single-story, brick veneer homes with a double garage, inground family size pool, and air conditioning to some rooms, but with no special views or waterfront.

And the building footprint/size was 380 sqm and the land size is 660 sqm.

In Sydney, the research found the house’s value in the outer western suburb of Penrith reached a price tag of $800,000, compared with the exclusive harbourside suburb of Darling Point where it was valued at $5.5 million, representing a 588% difference.

Looking at regional NSW, Byron Bay - which has seen the biggest growth out of any suburb in Australia in the past 12 months - saw the property valued at $2.8 million.

Compared with Orange in the Central Tablelands, where the property was worth $550,000, the two regional locations represented a 409% difference.

Heading to the Sunshine State in Noosa, which has been on a similar trajectory to Byron Bay, the house was valued at $1.8 million while in the Gold Coast suburb of Southport it was $1.3 million representing 38% difference.

In Logan, Brisbane the house was worth $332,000 while in New Farm - a suburb boasting five-star hotels, boutique shopping, and fine dining options - it was valued at a projected $2.1 million, which was a 533% difference.

Going into Victoria, in Brighton, the Melbourne bayside suburb favoured by football players and TV personalities, the property was valued at $3.4 million compared with Box Hill - known for its multicultural appeal - where it was worth $1.6 million, a 113% difference.

On the Great Ocean Road in Torquay, home of the world-famous Bells Beach, the house was worth $1.1 million, and in Kyneton a regional suburb 70 minutes from Melbourne and based in the Macedon Ranges it had a projected value of $735,000 marking a 49% difference between the two regional areas.

“It’s incredible to think how the exact same home can have such a dramatically different value, simply based on where it’s located.

The results also highlight the importance of understanding your home’s true value, based on a wide variety of factors - location being just one of them.” 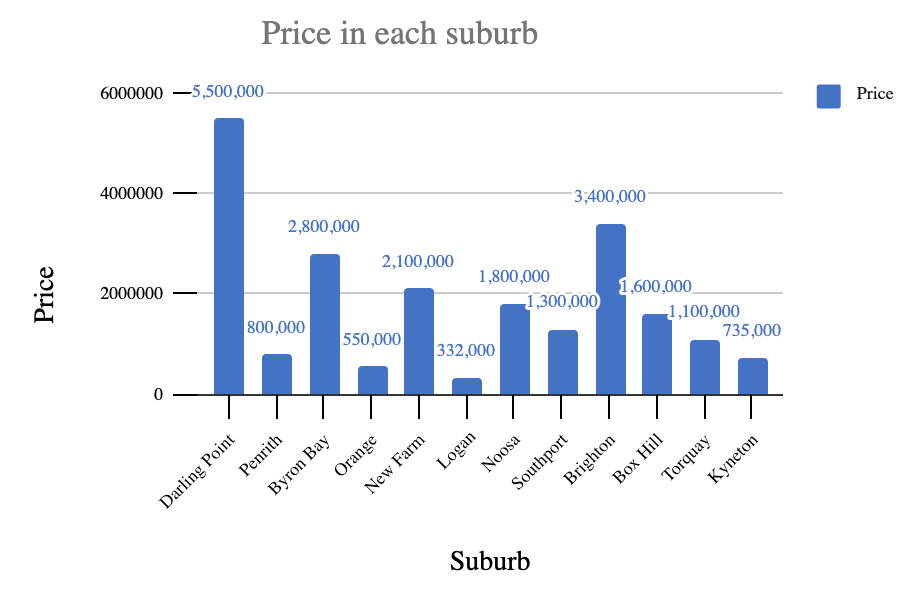