In recent months, there has been plenty of talk of a housing boom in Australia. While some commentators think there’s plenty more left in this cycle before we run out of steam, others are warning that property prices are set to fall.

Combined capital city home values increased by 10.6% over the last year.  But growth around Australia has not been uniform as can be seen from the chart below, with Sydney (15.6%) and Melbourne (11.6%) being the primary drivers for capital gains over the year.

Why are prices rising?

One of the major drivers of this upswing is the effect of lower mortgage rates on housing affordability.

You see… despite what some claim, the current low interest rates have meant that despite home price growth, home loan repayments have fallen over the last few years, making homes more affordable thus pushing up prices even further. 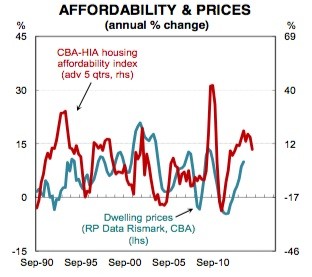 At the same time our strong population growth is increasing demand for housing.

The following chart shows how a lift in the birth rate and particularly high migration levels mean our population is growing by over 400,000 people each year. This is a bit like adding another Canberra each year. 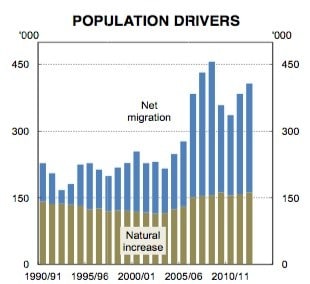 Aren’t we building too many dwellings?

The RBA is counting on our construction sector to fill the economic void left by our slowing mining boom and this is exactly what is happening.

Low interest rates and strong demand has encouraged builders and developers to construct more dwellings.  Much of this has been concentrated in apartments, units and townhouses where building approvals increased 40% over the last year, while detached housing approvals rose by a little under 20%.

But we’re not building to many dwellings. At least not yet.

Currently “demand” is running ahead of “supply” in most markets, but as many of the large apartment projects currently on the drawing board or under construction hit the market over the next couple of years they will have the impact of moderating, though not completely offsetting, the extent of excess demand in the overall housing market.

Are investors pushing prices too high?

Yes property investors do account for an unusually large part of housing activity at present. 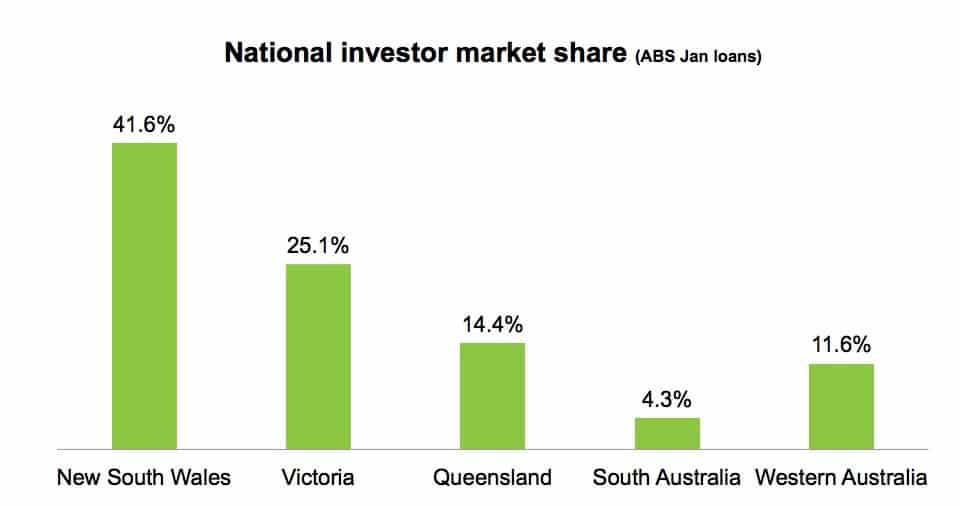 This is in part a response by ordinary Australians to the low interest rate environment created by the RBA as well as a new surge of investment by self-managed super funds and overseas investors looking for a safe haven for their money.

But they haven’t pushed prices too high.

Combined capital city home values are now only 7.2% higher than they were at their previous peak in October 2010 and this has been largely driven by the strong growth in Sydney  (+15.8%).

As you can see from the following chart while Melbourne (4.7%), Perth (2.9%) and Canberra (1.2%) are also above their previous peaks of three and a half years ago, the other states are not.

The market’s momentum together with low interest rates, relative affordability, strong migration and rising household suggest house price growth will remain robust in our capital cities for the rest of the year.

But like all cycles, this one will eventually come to an end, most likely stopped by the same factor that put a halt to most previous property cycles – rising interest rates.

In past cycles a 20 per cent rise in the mortgage rate typically choked the property booms that were underway at the time. While the RBA recently suggested it will not raise interest rates for a while, if the property market keeps performing as strongly as it has, especially in Sydney and Melbourne, the RBA’s hand may be forced to respond.

In the meantime there are also some natural corrective mechanisms at work:

And as more supply comes on-stream with the completion of the many apartment blocks under construction vacancy rates will rise and rental growth will slow.

Is it too late to buy into this cycle?

Definitely not, but it’s important to buy selectively.

Sydney is likely to continue to outperform this year given that it is still making up for a long period (2003-2008) of minimal price growth. Robust auction clearance result and relatively low construction levels suggest strong growth in property values for the rest of this year, slowing to lower levels of growth in 2015.

Melbourne’s price growth surprised most commentators last year but the rate of growth in 2014 should slow to single digit levels in 2014 and 2015, supported by overseas migration and foreign investor demand.  However investors should be very wary of the looming oversupply of new CBD and near city apartments.

Brisbane, one of the laggards this cycle, should improve in part driven due to the large affordability differential which could cause increased interstate migration from southern states.

[sam id=43 codes=’true’]While house prices nationally are up around 11 per cent in the past year, they are only 7 per cent higher than their most recent peak and have only averaged 4.5 per cent annual growth in the past five years – not the stuff that property bubbles are made of.

This means we’re working our way through the normal property cycle and despite the construction boom occurring around our nation, we’re still not building enough homes to cater for our population growth of about 400,000 people a year.

However if prices keep rising keep rising as strongly as they have been in the first quarter of this year things could get risky and it’s likely the Reserve Bank will raise interest rates to cool things down a little.

But if you’re looking to buy a home or an investment property don’t wait for property prices to slump any time soon. As the old saying goes: “Many an optimist has made money by buying out a pessimist.”

If you want to take advantage of the opportunities our growing property markets will offer you now is a good time to consider your options.

'When will the housing boom bust?' have no comments