Find a problem, solve it and then monetise it.

If you want to become successful you need to think like a self-made millionaire and that’s how they think.

They see obstacles and figure out ways around those obstacles.

People will pay for solutions to every day problems.

The burgeoning electric revolution had problems.

The DC current that Thomas Edison had been working on was costly over long distances, and produced dangerous sparking from the required converter.

It is Tesla’s system today that provides power generation and distribution to North America.

In 1978, the farmers in a small Chinese village called Xiaogang gathered in a mud hut to sign a secret contract.

Instead, it wound up transforming China’s economy in ways that are still reverberating today.

The contract was so risky — and such a big deal — because it was created at the height of communism in China.

Everyone worked on the village’s collective farm; there was no personal property.

In Xiaogang there was never enough food, and the farmers often had to go to other villages to beg.

Their children were going hungry.

The farmers agreed to divide up the land among the families.

Each family agreed to turn over some of what they grew to the government, and to the collective.

And, crucially, the farmers agreed that families that grew enough food would get to keep some for themselves.

At the end of the season, they had an enormous harvest: more, Yen Hongchang says, than in the previous five years combined.

That huge harvest gave them away.

Local officials figured out that the farmers had divided up the land, and word of what had happened in Xiaogang made its way up the Communist Party chain of command.

At one point, Yen Hongchang was hauled in to the local Communist Party office.

The officials swore at him, treated him like he was on death row. 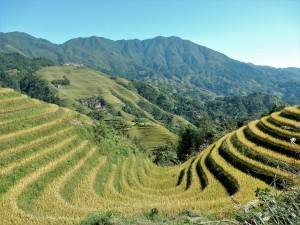 But fortunately for Mr. Yen and the other farmers, at this moment in history, there were powerful people in the Communist Party who wanted to change China’s economy.

Deng Xiaoping, the Chinese leader who would go on to create China’s modern economy, was just coming to power.

So instead of executing the Xiaogang farmers, the Chinese leaders ultimately decided to hold them up as a model.

Within a few years, farms all over China adopted the principles in that secret document.

People could own what they grew.

The government launched other economic reforms, and China’s economy started to grow like crazy.

Since 1978, something like 500 million people have risen out of poverty in China.

The electric car had problems.

It took a very long time to charge the inefficient batteries that powered the first electric cars.

Even worse, the electric cars had a short range, about 125 miles.

Elon Musk developed batteries that allowed electric cars, for the time, to travel 300 miles without a charge.

Problem solvers, like Tesla, the 18 farmers and Musk transform the world in which we live and are rewarded financially for their solutions.

Seek out problems, don’t run away from them.

Inside every problem is a solution waiting to be found.

Those who seek solutions to problems will find success waiting for them on the other side of those problems.

'The Obstacle is the Way' have no comments