In his Blue Notes newsletter he explains Sydney’s recent real estate price gains have been a “catch up.”

Here’s a summary of what he said:

A decade ago it would have been a bit obvious to say NSW was driving the Australian economy but it does actually sound slightly odd to be saying that today. 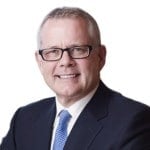 After all, NSW has no iron ore, no LNG, tourism slumped in the decade after the Olympics and NSW property prices have lagged the rest of the country.

But NSW is returning to pre-2003, the last time it out-performed the Australian economy.

My view, and it has been reinforced by a recent tour of the state, is the period between 2003 and 2013 was something of an aberration.

There is no doubt there was a hangover in NSW after the Olympics, following a period when the economy and the property market had grown excessively.

Then the rest of Australia took off, particularly Western Australia and Queensland, with the resource investment boom. NSW also had some governance issues which I believe are now behind it.

The story today then is one of recovery.

ANZ’s chief economist Warren Hogan has been emphasising how strong the NSW outlook is in recent research.

The unemployment rate in Sydney has fallen below 5 per cent compared with a jobless rate of more than 6 per cent for the rest of Australia.

The NSW economy is expected to be buoyed by substantial infrastructure spending in coming years as an expected $A20 billion in proceeds from the privatisation of electricity networks is invested in new projects.

So what has changed to pull NSW out of its long funk?

On the property front, Sydney is no longer massively over-priced relative to the rest of the country.[sam id=37 codes=’true’]

The change in government, even with their own issues, has seen a lift in confidence. This government is also starting to engage in long term infrastructure spending. Initiatives like the electricity privatisations will help NSW catch up with Victoria which has enjoyed the compound benefits of its privatisation push in the 90s.

Major developments like Barangaroo, where the office expansion will be the equivalent of London’s Canary Wharf and lift Sydney’s office supply by 10 per cent, are very important.

There are planned motorway and port expansions.

The Australian economy’s migration away from the concentration of growth in the resource-based states towards more services, technology and finance, plays into NSW’s sweet spot – these are more labour intensive sectors.

Population growth is occurring for the right reasons.

Sydney is a centre for IT and professional services and these are growth sectors with a robust outlook.

So a lot of these natural factors to support NSW are working together now.

And for all the talk of a property bubble, when you look at Sydney real estate versus the rest of Australia, what has been happening is again more just a sense of catch up.

NSW’s traditional manufacturing base is actually quite solid but there are also, vitally, new industries emerging.