Working as a journalist for Australian Property Investor Magazine over the past three years has given me much more than just a salary.

It has also been a huge learning curve and life lesson about how one simple choice on where you invest and what you buy can either put you leaps and bounds in front or years behind.

I’ve spoken to readers who made the right choice and are now using their equity to continue to grow their portfolio. 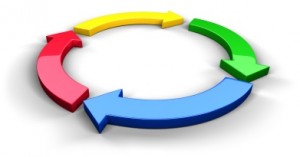 I’ve seen how that equity creates more equity in their next purchase and eventually leads to the path of financial freedom.

Unfortunately some have also bought a lemon and this has stagnated their progress for years.

So here it is – the biggest lesson I’ve learnt over the past three years at API is that you should always buy counter-cyclical.

Take a look back at any API magazine and you’ll soon realise that those who were buying in the Sydney market two years ago, when lots of people were bagging the market and predicting further falls, would now be well and truly ahead of the crush of investors pushing prices further and further up.

Until recently, the Gold Coast constantly copped a hammering in the papers.

Those who knew I owned an apartment there would ask me, “are you going to sell your Gold Coast unit, now that the area won’t see growth for years and years to come?”

At times, I questioned if I should just offload it, given the doom and gloom surrounding the area.

I thought it might take another decade to see growth.

But I held onto my 90 square metres of hope and just recently, a unit in the same complex where I own my unit sold for quite a bit more than what I originally paid in 2009.

It now seems so obvious that when people were telling me to sell my unit, I actually should have been tapping into this area even more.

I can also remember going to an auction to buy our property in Brisbane two years ago and only two other people were bidding against us on the night.

We bought our principal place of residence for what I consider to be a bargain price and today, I’m pretty sure the competition would be much greater and you’d need to fork out a whole heap more.

At the time, friends would comment, “Why would you buy in Brisbane now?

The market is flat and will be flat for years, you’re better off waiting a few years.”

It’s hard to think a flat market will change, just as it’s hard to see how a booming market will slow down, but markets do fluctuate and those who buy counter-cyclically can reap huge rewards in relatively short amounts of time.

But perhaps the one moment in time that I truly will never forget was the window of opportunity to invest in Sydney before prices went balistic.

A good friend of mine listed her Erskineville terrace just before Christmas in 2012.

It failed to sell at auction and so few people were attending open home inspections on the weekends that the agent soon cancelled those too.

They eventually took the property off the market.

It’s amazing to think just 12 months later, dozens of people were attending open home inspections and some inner-city terraces were selling for hundreds of thousands of dollars above the reserve in some cases.

Think about what not buying counter-cyclical has cost you in the Sydney market.

It hurts, doesn’t it?

Actually, it more than hurts.

It almost brings tears to the eyes.

Okay, not quite, but it definitely makes you think ‘if only’.

There’s not just the extra cost of having to purchase 12 months later, but the ongoing extra mortgage repayments, the higher negative gearing, etc., and suddenly that chance is gone.

So what if you missed the Sydney property boom?

I’d suggest you spend the next 12 months following API and looking closely at what our ‘experts’ do.

I have huge admiration and respect for some of our regular experts, including Margaret Lomas, Gavin Hegney and Patrick Bright.

They have all built successful property portfolios and considerable wealth.

If you have plans to actually see some of the world before you’re too old to enjoy it, I’d be looking at what these guys do and trying to replicate it.

If you look at their track record, you’ll notice they buy counter-cyclically.

I can still remember Patrick Bright buying as much as he could when I first started working at API three years ago.

I recall asking him if he was concerned about the doom and gloom that was blowing over the Sydney market and I can still hear him saying to me, “you’re going to regret not buying in Sydney right now, and you’ll regret it even more in a few years when you miss out”.

He was absolutely spot on with his prediction.

How about you? Do you have huge regrets about not buying in the Sydney market 12 months ago, or do you think investing is long-term anyway and should therefore be seen as a long-term approach?

Perhaps you read API post-GFC and were inspired to buy an investment and are now enjoying the growth?

We’d love to hear your story!