Remember, this is historical data but it does cover a period of weakening commodity prices, falls in mining profits and weak demand in some sectors of the domestic economy.  It also covers the natural disasters – and yes, they did have an impact – but our little Aussie engine was running much better than it sounded.  This helps explain the recent fall in our jobless rate to 4.9%.

It is also more than mining that has helped our economy grow.  What the eggheads call “non-farm GDP” grew by 1.2%, which points to more a buoyant domestic economy than most realise.  Household savings also remain high at 9.3%.

Also, farmers out there have had lots of rain – which is often problematic in the short-term – but is great news and provides serious economic support into the future.  Too few make comment about the farmer’s impact on our economy these days.  Wet is good/dry bad – it isn’t that hard to remember.

So, was yesterday’s interest rate decision a wise one?  For mine, as noted, the RBA should have cut by 0.5%.  Remember, the RBA cut the official rate because of concerns about the international situation and the inflation outlook (at present) is benign.

Further interest rates cuts (given the 0.25% official drop yesterday) might occur, but they won’t now be due to our domestic economy but because of further crises in the eurozone.

A 0.5% drop would have boosted local confidence and allowed the majors to pass on a meaningful drop to mortgage holders, and especially small business owners.  But for mine, structural reform is more important – given how low interest rates already are – than monetary easing, and sadly there is no sign of any relevant action.

As I have noted in a recent post, much more needs to be done to kick-start new housing than just dropping interest rates.  Structural reform, not cyclical tinkering, is urgently needed.   Housing isn’t the only engine that desperately needs a major overhaul.

Australia’s structural problems require welfare, tax, regulatory and IR reform.  Further interest rate cuts might happen but there is a real risk of putting the monetary policy cart before the structural reform horse.

Roll on the next federal election – and we must hope for a government seriously interested in economic reform.

And despite the current absolute economic incompetence, the ABS’s latest quarterly health check on corporate Australia found that although profits were down, sales, inventory and wages all grew at a reasonable rate during the first three months of this year.  In fact, we are creaming most of the world. 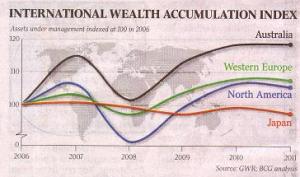 Australia’s annual growth pace of 4.3% compares with 1.9% in the USA; a zero to negative result in the eurozone; a 0.1% contraction in the UK (and I thought it was just the crappy music at the Queen’s Diamond Jubilee that was putting the pucker on Her Majesty’s face) and 2.6% growth (yes growth) in Japan.  China is currently growing at 8.1% and India by 5.3%.

In short, Australia is a country that barely understands, let alone appreciates, its own luck.

Being so close to good fortune can often make one blind to it.

Michael Matusik is the director of independent property advisory Matusik Property Insights.  Matusik has helped over 550 new residential developments come to fruition and writes the weekly Matusik Missive.  The Matusik Missive is free, however, reprinting, republication or distribution of any portion of this material, or inclusion on any website, is strictly prohibited without the written permission of Matusik Property Insights and may incur a charge.