Finally there has been some good news for Australia’s economy.

Our growth, our GDP, exhibited the fastest growth since 2016 – up a strong 1.0% in the first quarter of the year, with an annualised growth of 3.1%.

This is only the second time since 2012 that annual growth has been above 3% which is where the RBA would like it to be. 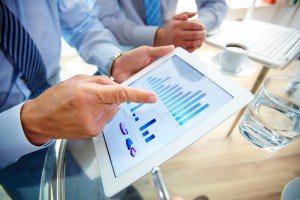 The rebound in growth was helped by a turnaround in net exports as well as strong public spending and a sharp rise in profits.

The RBA is likely to be relieved with the rebound in growth.

But it will still be waiting for wages growth to pick up, but this won’t happen for some time yet given the spare capacity in our labour markets,

The risks to the global economy have also increased.

In this environment, and with inflationary pressures still modest, the RBA is clearly going to keep interest rates on hold for some time. 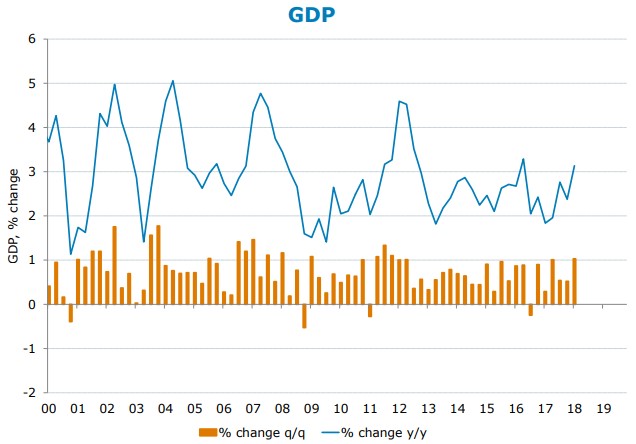 The number was boosted by a strong rise in utilities spending — likely related to the long hot summer.

Elsewhere there was strength in clothing, communications and household goods.

This is in contrast to quite weak nominal growth in these sectors, given falling prices.

At the other end of the spectrum real utilities spending has actually fallen over the past year, as higher prices look to have crimped demand. 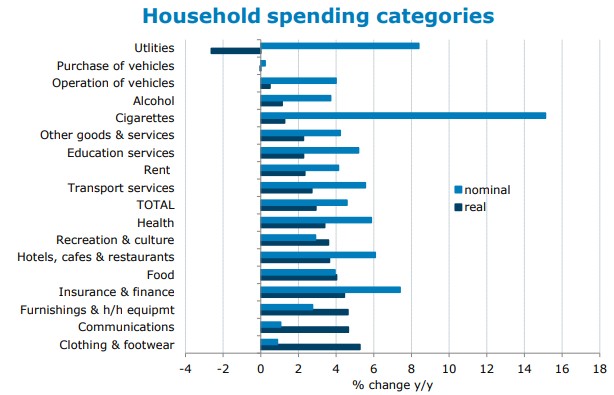 The household saving fell again in Q1, and was revised lower in Q4.

The saving rate is now down to 2.1%, the lowest since the December quarter 2007.

Low wages growth is clearly contributing to the drop in the saving rate as consumers continue to grow consumption at a stronger pace than income. 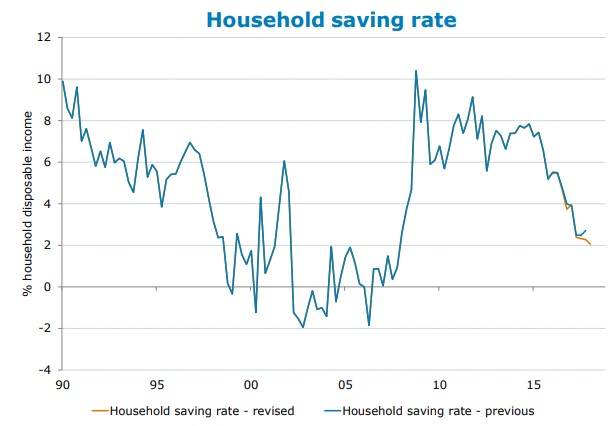 Housing: still something left in the tank

This should keep activity elevated through 2018. 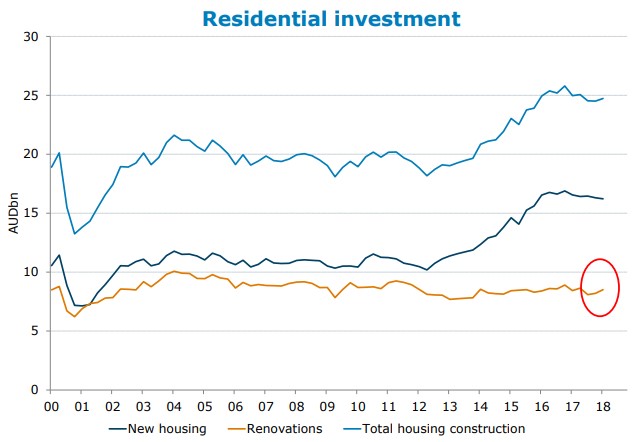 Non-mining business investment is a key driver of growth. It rose 3.6% in Q1 to be 14% higher than a year ago.

This has largely been driven by stronger non-residential construction.

Although recently machinery and equipment investment has picked up.

While non-residential approvals have turned down, the strength in profits suggests that the outlook for non-mining business investment remains quite positive. 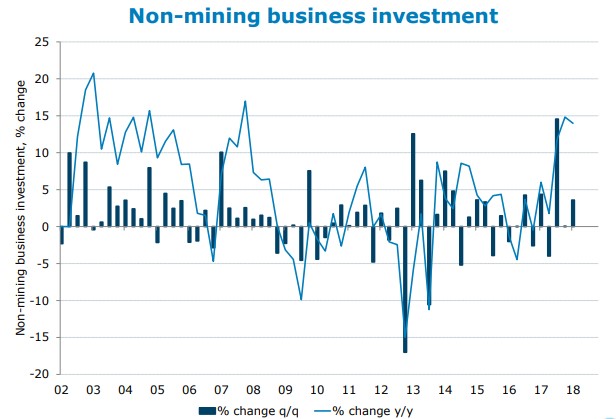 Once again public demand contributed strongly to growth in the quarter.

While infrastructure spending garners the most attention, it is spending on public consumption that is the bigger driver of overall public spending.

Given the pipeline of infrastructure spending and the ongoing roll-out of the National Disability Scheme, we expect strength in public spending to continue. 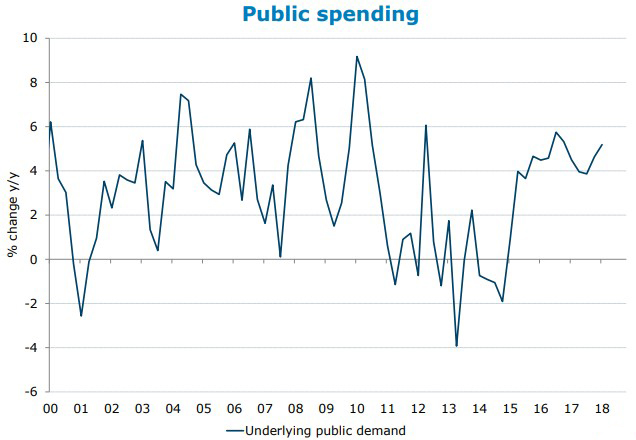 The growth was largely driven by a bounce in resources exports.

Exports of manufactured and rural goods were weak. Services exports rose only modestly after falling in both Q2 and Q3 of 2017.

Annual growth in services exports has fallen from a recent peak of 12% in Q2 last year to just 1% in Q1.

Given the importance of services exports, we’ll be watching this trend closely. 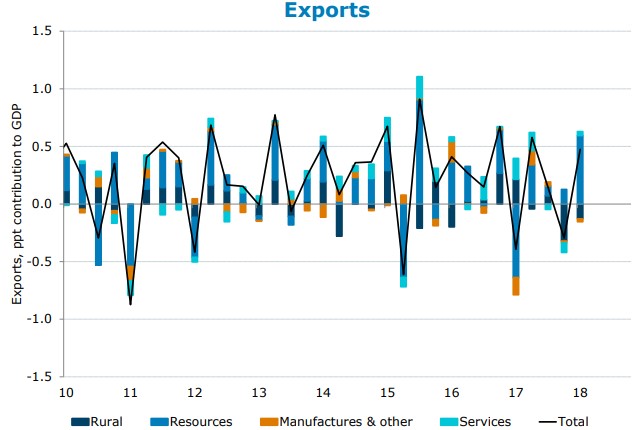 Farm GDP fell 15% over the year to March, while exports are down 14% y/y, partly as a result of dry conditions affecting much of eastern Australia and some of the west.

Low rainfall in May also cemented the dry start to the southern wet season, which does not bode well for the southern agricultural cropping season.

While farm accounts for less than 2½% of GDP, big swings can affect headline GDP and drought conditions can flow through to inflation. 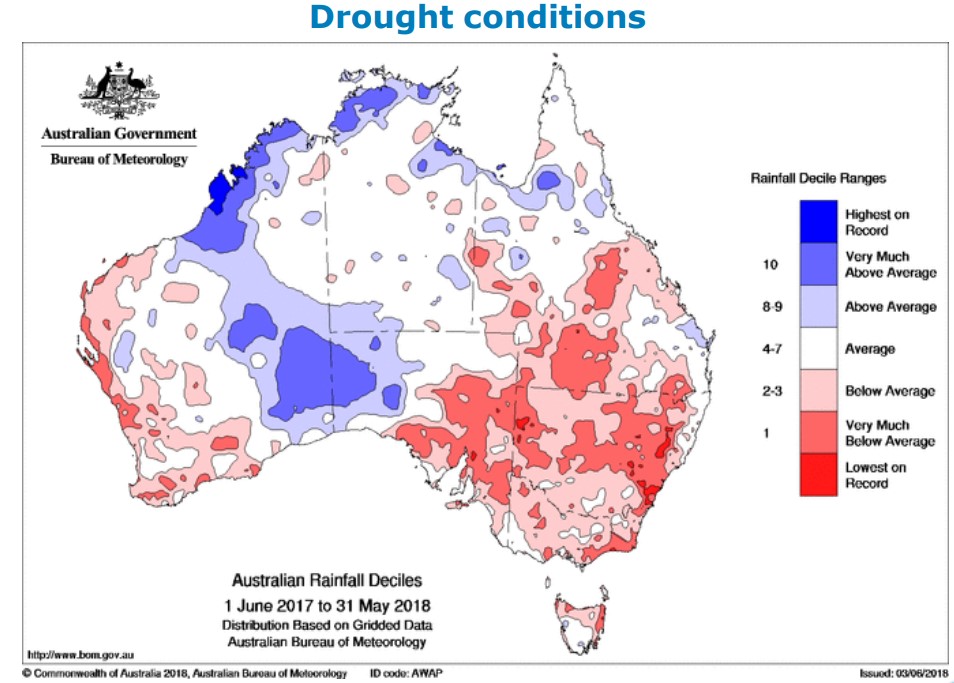 Wages growth: on the improve

The GDP measure of wages looks to be well past the trough.

Average non-farm wages rose 0.5% in the quarter, although annual growth edged lower to 1.6% due to base effects.

Other measures of wages are also trending higher. We think wage growth will improve from hereon, but the path is likely to be gradual given ongoing spare capacity in the labour market and volatile in the case of the GDP measure. 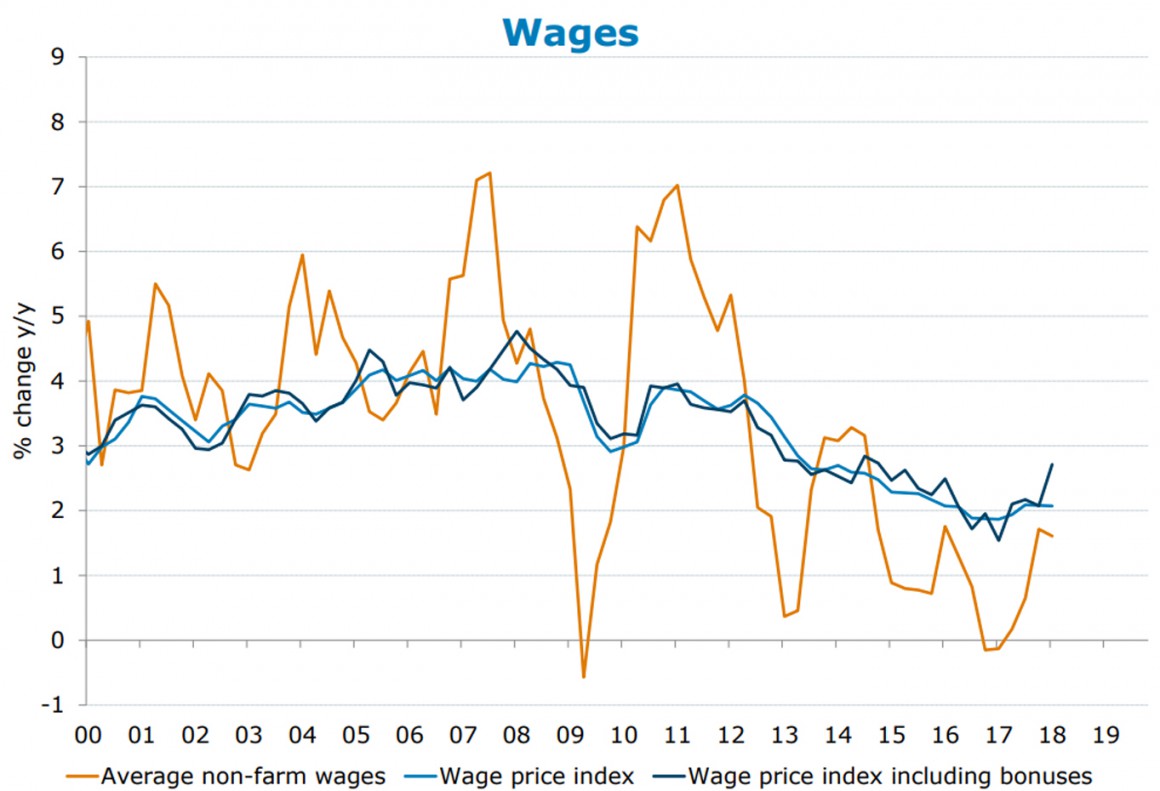 Inflation is picking up, but remains low compared with history.

These measures of consumer inflation are broader than the CPI and suggest that price pressures are gradually increasing but remain low. 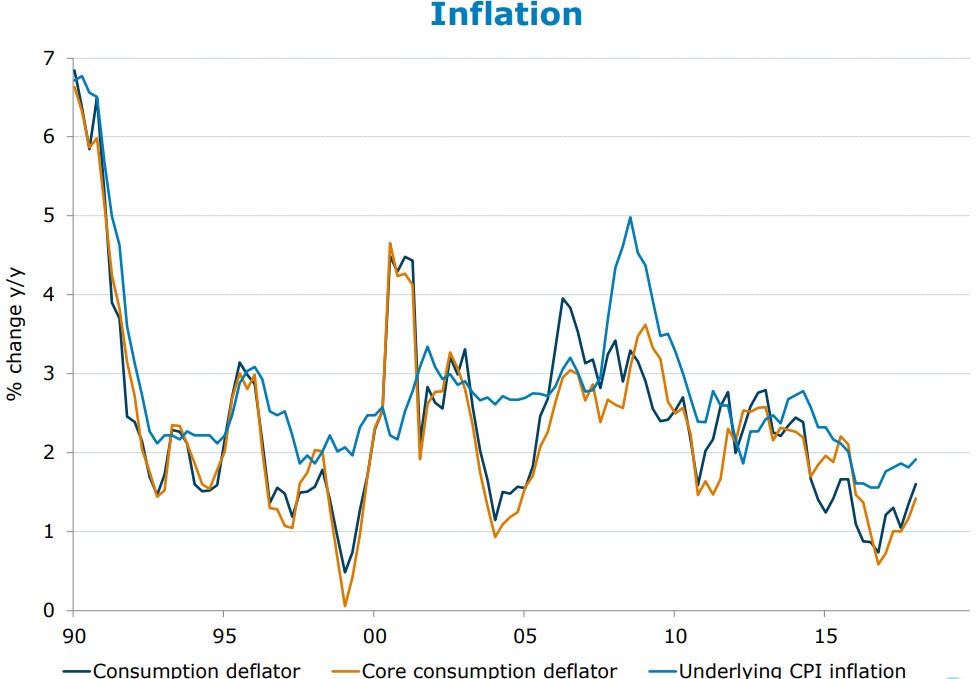