One cold July evening back in 1994, I was seated in the warmth and grandeur of Sydney’s State Theatre, having travelled almost 900kms by road to hear some of the top personal development speakers from around the world.

One of them was a caricature of a man called Charlie Tremendous Jones. 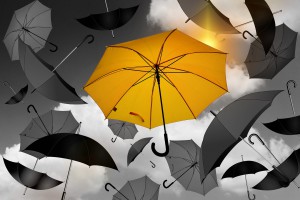 He was, by any measure, your typical rah-rah American motivational guy.

His demeanour and his extroversion grated on me, but I quickly warmed to the sincerity and power of his messages.

One of my favourites was this:

“Sometimes the only thing that’ll stop you going crazy is music. Other times it’ll be your family, and sometimes, your work; and each will take turns in saving your life.”

Perhaps this is why I’m so happy most of the time.

I work at home, close to my family, and usually with music playing in the background.

Another thing Charlie said – a message that relates to the title of this story:

“Everyone’s got problems. No matter how successful you become, you’re not gonna to get out of problems. Your job is not to avoid problems.

Your job is to find bigger ones and better ones, then give those little ones to someone else to solve!”

He went on to say that people focus on small, unimportant problems and never stand back far enough to see the big picture and the opportunities it offers.

Because of this, a lot of people have a misguided view of giving and the role it plays in the bigger picture.

This resonated with me.

As an example, a struggling single parent who gives $20 to Unicef is infinitely more generous than a middle-aged man on a good salary who gives $200.

I truly believe that charity (in all its forms) is one of the keys to a successful life.

If you want more out of life, if you want a better life, giving more of yourself and the resources at your disposal (anonymously, if possible) is a worthy goal.

Don’t be a gold star chaser.

Do it knowing that your reward comes to you the moment you give.

Understand too, that although your rewards may not come from those you serve, they will come from some place.

Earl Nightingale called it one of the great laws of prosperity and success.

Part of this comes from the mind-set it creates (abundance), because believing you have enough to give seems to create more for yourself, as if by magic.

Conversely, a scarcity mind-set says, “I don’t have any spare time or money,” and so appropriately, you’re rewarded with less of both.

I’ve long believed that anonymous charity is one of the most selfish but honourable things you can do.

Selfish, because through the law of reciprocity, it always comes back to you over and above what you give; and honourable, because it helps someone else at the same time.

So even if you’re a cold-hearted pragmatist with personal abundance as your north star, start giving more.

If you can do it without anyone knowing, even better.