Residential vacancies fell nationally in January 2015, with a vacancy rate of 2.3% posted nationally based on 69,847 vacancies, down from 2.6% in December when vacancies hit 77,000.

Falls were recorded in all capitals cities, following an influx of renters securing accommodation to start the New Year.

Over the month vacancy rates fell the most in the big population centres of Melbourne, Brisbane, Canberra and Sydney as workers and students sought accommodation after the summer break.

Over the year to January 31, Hobart recorded the biggest yearly decline in its vacancy rate, reflecting a stronger economy which has been boosted by tourism and a lower Australian dollar.

Modest annual falls were posted in Canberra and Melbourne.

In contrast, the vacancy rate has jumped in Darwin and Perth from January 2014, reflecting the impact of the commodities downturn on rental demand in those cities.

Darwin recorded the highest yearly increase in its vacancy rate, climbing by 1.8 percentage points from a year earlier based on a total of 905 vacancies. 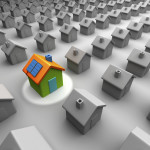 Vacancy rates in Darwin and Perth will likely continue to rise in 2015 as the mining sector continues to contract given falling commodity prices and the sluggish global growth we are seeing.

That has caused a big contraction in employment in the mining and resource-related sectors, particularly in temporary/contract jobs.

The jobless rate will likely keep rising in Western Australia and the Northern Territory, and therefore in Perth and Darwin.

So we expect to see even weaker demand for rental accommodation and a continued rise in vacancy rates in those cities, which would push rents down to more affordable levels.

That’s good news for renters, but bad news for landlords.

As can be seen from the table below, SQM Research data reveal asking rents in Perth and Darwin have dropped significantly over the year to February 12, with asking rents for houses in Darwin falling 11.4% and dropping 3.4% for units.

Perth has recorded a 7.2% fall in asking rents for houses and a 4.7% decrease for units. 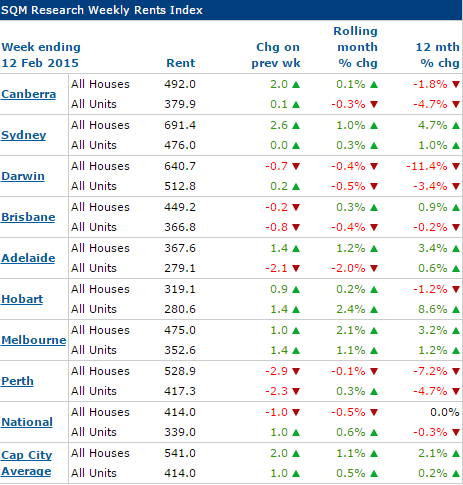 That bucks the national trend where rents have risen modestly over the year to February 12 for houses and are stable for units.

Like we reported last week, property markets in Darwin and Perth are likely to experience ongoing weakness as the commodities downturn takes its toll.

As with house prices, rents are at risk of falling more and returns on property heading south.

SQM considers this to be a superior methodology compared to using a potentially incomplete sample of agency surveys or relying on raw online listings advertised.

Please go to our methodology page for more information on how our vacancies are compiled.

'Vacancies Fall As Renters Return | Louis Christopher' have no comments