I don’t remember its introduction in 1956 – my family couldn’t afford a TV then, but I do remember these classic TV tunes of the fifties and sixties – those theme songs and jingles you can’t get out of your head if you’re a Baby Boomer.

In 1984, I lived in the USA. Until I found a place of my own, I bunked with an American friend who was about the same age as me. Our main topic of conversation was 1960s television. 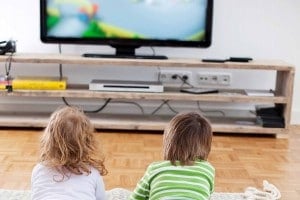 After years of anticipating its arrival, Sydney and Melbourne finally got it late in 1956, while the other capital cities had to wait even longer for it.

Watching TV is a significant part of my collective memory.

Why did I become an architect?

The answer is the oddball architect Wilbur Post (played by Alan Young) in the TV sitcom Mister Ed (1958–1966).

As a 17-year old working class boy in search of a career, it seemed to me that Wilbur had it all: a pet talking horse, a pretty blonde wife, a modern ranch style house, his best friend as a neighbour, and – to top it off – he worked from home (his office was located in Mister Ed’s barn).

My 30-year-old son doesn’t look back on his early TV viewing experiences with quite the same fondness as I do on mine.

I suspect because television was no longer a novelty when he was growing up.

His feelings about computer games are probably more akin to mine about television.

Indeed, he named his daughter after a 1990 George Lucas computer game.

I am frequently horrified by the amount of useless information stored in my brain.

I occasionally find myself singing this little ditty from The Tarax show: “Who’s that peeping round the corner? Not Jack Sprat or Little Tommy Horner.”

Many others also have this ability to recall songs from their TV past.

Here, for what it’s worth, are my top ten irritatingly memorable TV commercials, jingles and themes.

How could an address set to music be so catchy? Private eye Stuart Baily (Efrem Zimbalist Jr.) was the epitome of cool sophistication, while car park attendant Kookie (Edd Byrnes) was a proto-hipster.

The “mysterious and kooky” Addams family was a welcome antidote to the host of seemingly perfect American families on TV during the 1950s and 60s, such as the Nelsons (The adventures of Ozzie and Harriet), the Cleavers (Leave it to Beaver) and the Stones (The Donna Reed show).

The Adventures of Superman

No one could burst through a Styrofoam brick wall quite as convincingly as George Reeves’ Superman. And who — of a certain age — cannot recite the Superman mantra word for word?

The Adventures of Robin Hood

Who doesn’t love a TV series with a pair of long haul truckers for heroes? Hum the Cannonball theme song next time you’re stuck in traffic.

Long after it has disappeared from supermarket shelves, the goateed “doctor” with a Broad Scottish accent continues to annoyingly spell-out his arthritis cure in my brain: “M-E-N, T-H, O-I, D-S.”

Before Bryce Courtenay began writing blockbusters, this is what he did.

The Life and Legend of Wyatt Earp

This is yet another catchy biographical theme song. American actor Hugh O’Brian visited Melbourne in 1960 to bring the famous lawman he played in the TV series to the stage at the Princess Theatre.

This has to be one the best opening sequences for a TV series ever made. As a 12-year old, I wanted to be as cool as secret agent Napoleon Solo (Robert Vaughn).

Derham Groves, Senior Lecturer, University of Melbourne This article was originally published on The Conversation. Read the original article.