Are Australia going to age gracefully, or is it all a pyramid scheme?

I saw an interesting article via Twitter by John Mauldin about the US ageing crisis this week, Pyramids of Crisis, which showed that by the year 2050 some 22 per cent of resident Americans would be aged over 65.
I was (am) chronically jet-lagged, so I thought I'd run some equivalent numbers for Australia to see what came of it, if anything.

And here are the jet-lagged results.
By the year 2050 the projected population of Australia is ~37.1 million, up from ~25.15 million today.
There will be many more females (3.6 million) than males (3.1 million) aged over 65, taking the equivalent ratio of the resident population aged over 65 to 18 per cent.
Australia is better placed than most other developed countries from a population pyramid perspective, then, largely thanks to its immigration program which typically targets the under 30s cohort.
But the ageing challenge doesn't go away entirely as life expectancy increases. 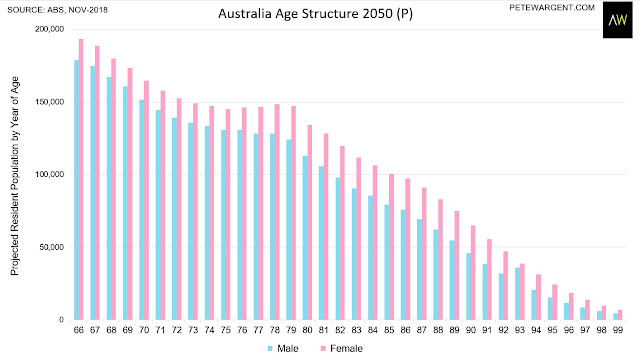 Firstly, women can expect to live longer than men in retirement, on average.
The ageing of the population is often pinned on there being too many Baby Boomers, but in Australia's case increasing life expectancy may prove to be at least as important, if not more so.
This might create a few headaches for social security and the Budget, although the fact that we are living longer and healthier lives is in itself a good thing. 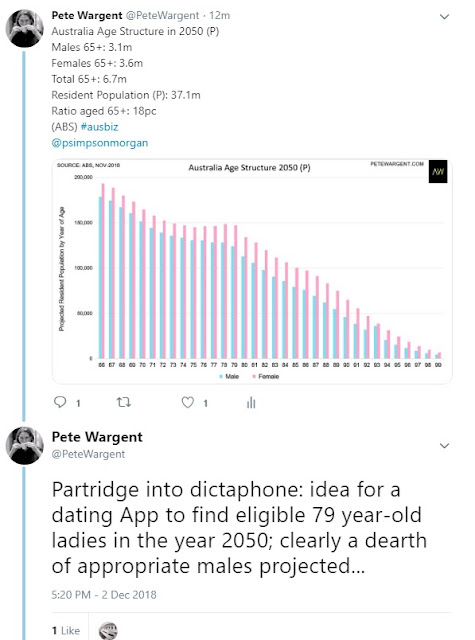 Secondly, the population pyramid could look a heck of lot more top-heavy without immigration - the median age may yet rise over time, but the modal age in 2050 is still expected to be in the 25-35 age range for both males and females.
So there will be a big bulge of taxpayers aged 21 to 55, which is handy.
And thirdly, as ever there are some significant uncertainties around the assumptions for mortality, fertility, and migration, not least that improvements in technology could extend life expectancy far beyond what we believe to be likely today.
Given that there will already be a projected 6.7 million Aussies aged over 65 it's my contention that the traditional picture of 'retirement' in Australia will have changed dramatically by the year 2050.
After all, if you live beyond the age of 85 you could feasibly be spending as much of your full life outside of the labour force as you did in it, which surely doesn't make a whole lot of economic sense!
You may also want to read: Property predictions for 2021 revealed