Positive net interstate migration to Queensland has in the past been a driver of growth for the Queensland economy.

This is mainly because (contrary to popular opinion at the time) interstate migrants were not retirees but the average age was in fact around 35 — prime family stage of life, which is where household spending peaks. 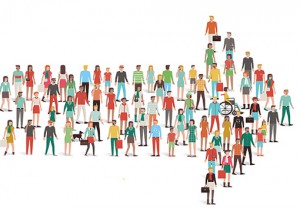 Many also arrived with ‘surplus’ capital (the arbitrage between higher house prices in places like Sydney and Melbourne compared with many Queensland locations) and they had well paid full time jobs to come to in Queensland.

They were cashed up, fully employed and at peak spending stage of life.

So is this about to happen again?

Let’s hope so but before we get too carried away with some of the real estate marketing hype, here are some things to keep in mind…

The actual numbers are relative

Net interstate migration is now close to 20,000 per annum, almost double the prior year.

But it’s also a long way from the peak.

Our population ticked over to 3 million in the early 1990s, so interstate migration back then was adding some 1.7% per annum to our population.

But there are now 5 million Queenslanders.

For net interstate migration to have a similar economic impact relative to the existing population, that 1.7% would today need to equate to 85,000 people per annum, or 1,600 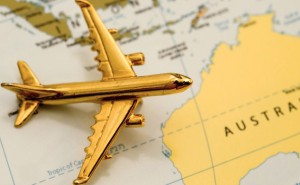 So not only are we a long way from historic records, but to have the same impact, the growth bar has been lifted.

The latest numbers that are being sold as good news are in fact less than a quarter of what they’d need to be to have a similar economic impact as it did in the early 1990s.

The graph below shows the same thing but using the actual quarterly numbers from the ABS.

This is what has people excited. 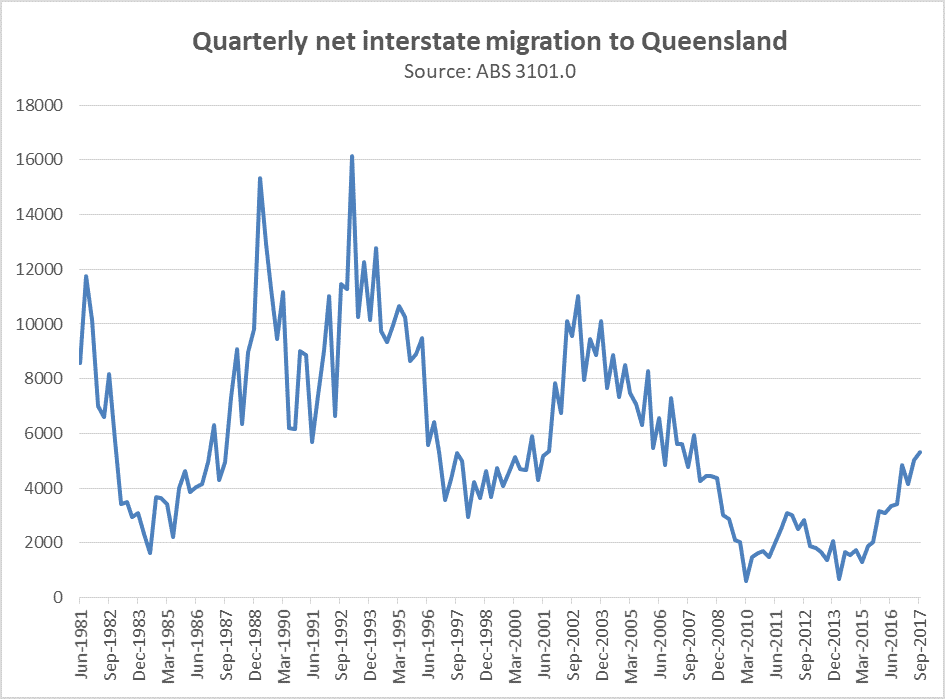 And the graph below shows those same quarterly numbers relative to the population at the time. 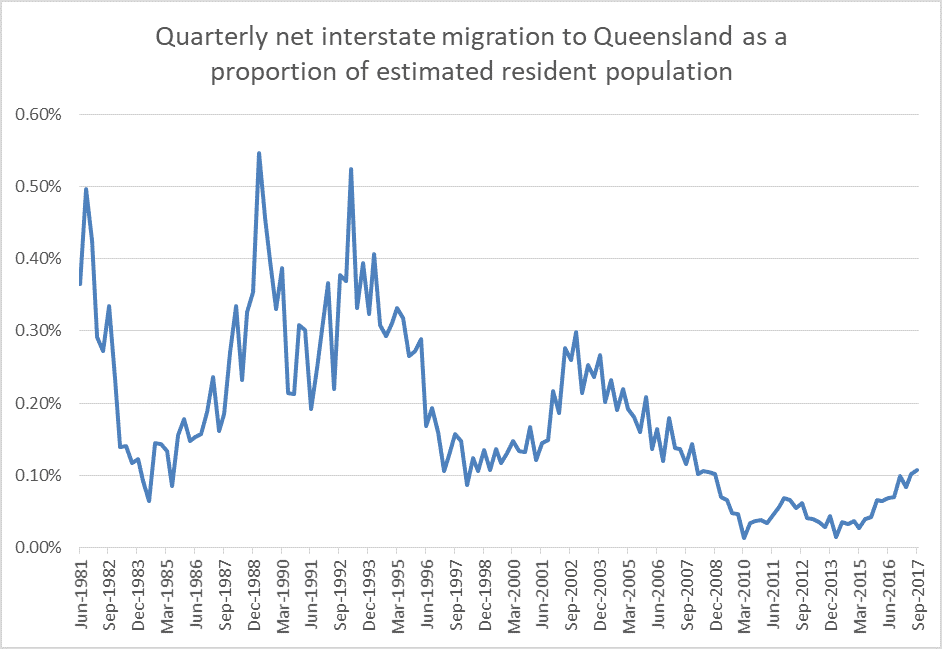 I emphasise full time jobs as these are needed to fund things like mortgages or to have a substantial economic impact.

Part time and casual jobs are counted in total employment data but for the purpose of this comparison, excluded. 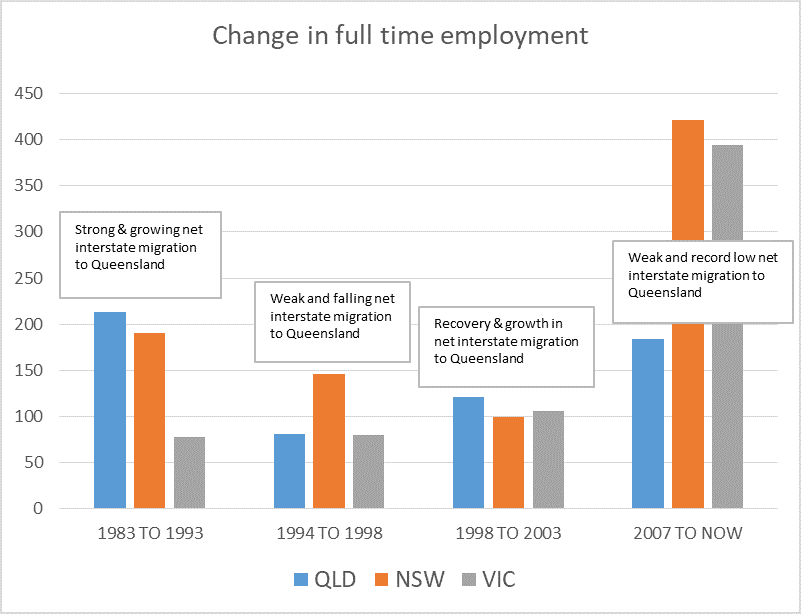 As the graph shows, in periods when Queensland’s full time jobs growth was stronger than or equal to rival states NSW and Victoria, net interstate migration was strong. 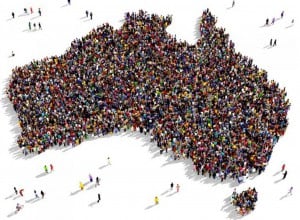 It’s no coincidence that the strongest period of net interstate migration in both raw and relative terms was in that period of broadly 1983 to 1993, when Queensland was powering well ahead of NSW and Victoria on the full time jobs front.

The next strongest period of net interstate migration (say 1998 to around 2003) also saw Queensland slightly outperform those states.

Likewise, the weakest period of net interstate migration — say from roughly 2007 to now — also coincides with a period when NSW and Victoria have been outgunning Queensland on the full time jobs front.

This seems to be convincing evidence that the relationship between full time jobs growth and net interstate migration is a strong one.

What about house prices then?

My suggestion is simple: when you have a growing economy with growing full time jobs you are more likely to witness rising house prices due to demand side pressure (along with many other supply side factors having a bearing). 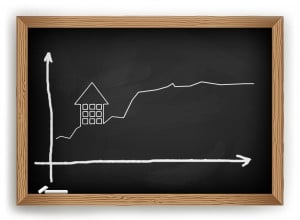 Hence why prices have risen so much faster in places like Sydney and Melbourne in recent years, compared with Brisbane.

The question is whether this gap in house prices will now become a trigger for large movements in interstate migration?

Is the current increase in net interstate migration in response to this widening gap?

The gap in median house prices has certainly widened to its widest point in some 15 years. 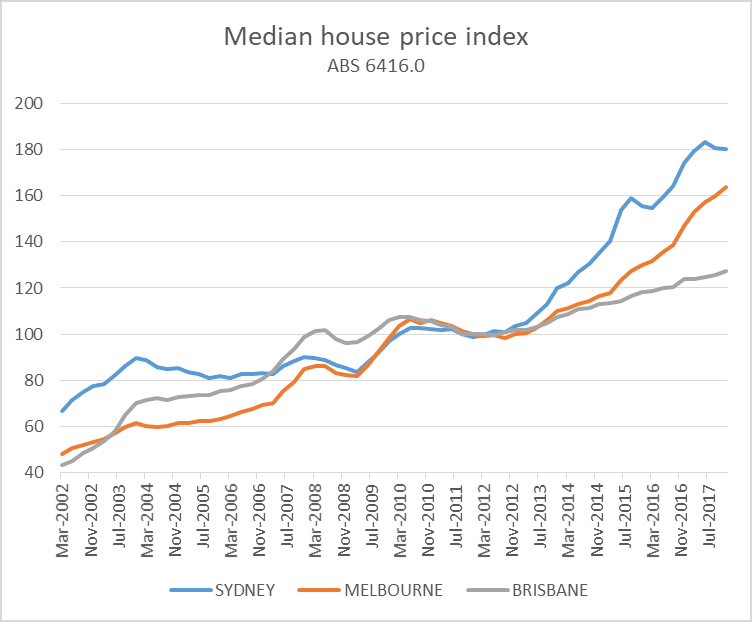 It is tempting to think this is the case and for those who have bought into the Queensland property market it is hard to resist the idea that cashed up southerners will begin to flood north, underpinning Queensland markets and driving price growth even when southern markets are softening.

However, the historic evidence seems to suggest that this is unlikely until Queensland’s relative strength in full time jobs is at least aligned with or ahead of full time jobs growth in NSW and Victoria.

When that happens, and if the gap in house prices still remains, then it might be time to get excited.

'Net interstate migration to Queensland is on the rise. Does this mean we are about to boom?' have 1 comment