The number of residential vacancies fell slightly across the nation in August 2015, with a vacancy rate of 2.3% posted based on 71,254 vacancies.

Over the year, vacancy rates in Darwin have continued to climb with a significant 2.0% jump from this time last year.

Vacancy rates in Perth have also climbed up 1.1% over the last 12 months.

Year-on-year, vacancy rates are down for Hobart and to a lesser extent Melbourne, with Hobart vacancies falling 0.5 percentage points over the last year, bringing the total number of vacancies down to 301.

Melbourne experienced similar yearly falls with vacancies falling from 2.6% to 2.2%, a total fall of 0.4 percentage points.

Both falls reflect the tightening of the both residential markets post downturns.

Yearly falls have also been recorded in Perth, with asking rents down 8.1% for houses and 5.5% for units.

In contrast, Hobart has recorded a rise of 6.7% for houses and 8.3% for units. Asking rents in Adelaide, Melbourne and to a lesser extent Sydney have also recorded modest rises for the same period.

There was a slight fall in vacancies this month, however I am still of the opinion that vacancies will gradually rise from here over the next 12 months.

Already there has been a noticeable impact upon the rental market with rents in most cities recording slower rental growth rates or, in some cases, recording falls in rents.

It is only the tourist destinations such as the Gold Coast and Hobart which are recording stronger rental conditions. 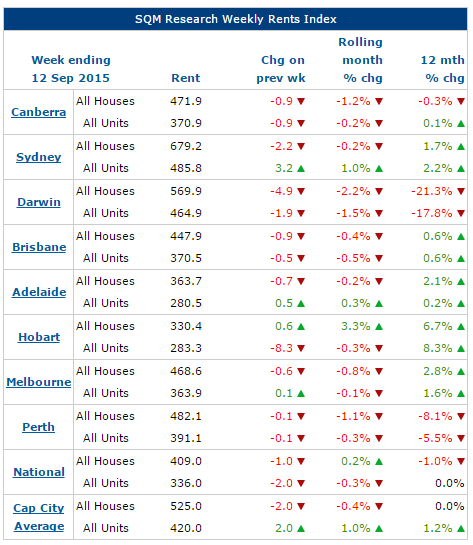