Figures released by SQM Research this week have revealed that the number of national residential vacancies rose slightly during July, recording a vacancy rate of 2.5%, and 79,300 vacancies.

Perth recorded the largest monthly rise, with vacancies increasing by 0.2 percentage points during the month of July.

On a year to year basis, Perth vacancies have climbed an alarming 1.4%, with vacancies climbing to 10,738.

In contrast, yearly falls were recorded for Canberra, Darwin, Hobart and Melbourne, with Canberra vacancies decreasing 0.8% compared to this time last year (July 2015).

Both Hobart and Darwin recorded a yearly fall of 0.4 percentage points.

Melbourne soon followed with a yearly fall of 0.3 percentage points.

Notably, according to SQM Research, Perth has recorded ongoing falls in asking rents of 8.4% for houses and 10.8 % for units over the past 12 months.

Yearly falls have also been recorded in Darwin, with asking rents down 2.1% for houses and 5.5% for units.

In contrast, asking rents in Canberra continue to rise; up 11.0% for houses and 9.8% for units.

Notably, Hobart continues to record the most affordable rental accommodation with rents for houses at just $340 a week and units averaging $280 a week. 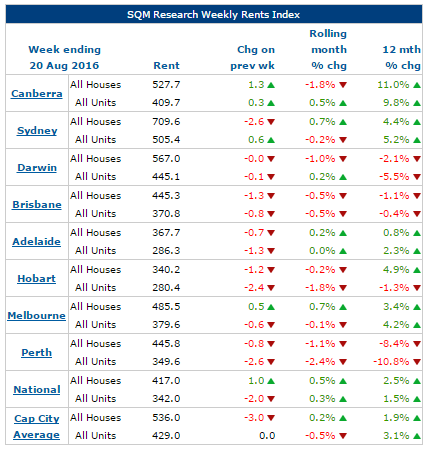 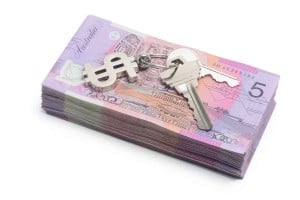 Perth continues to be the ongoing exception with further increases in vacancies this month as the mining downturn continues to hit the economy hard.

Looking forward, I believe the national vacancy rate will continue to creep upwards.

Melbourne may start to record higher vacancies next year under the weight of completed apartment developments; but for now Melbourne remains a landlord’s market.

Sydney is unlikely to record such a surge in vacancies as we believe the city’s population expansion is going to absorb much of the new stock.