It seems the rich are not getting any richer after all and Australian millionaires did it tougher than their global counterparts last year.

The annual Capgemini World Wealth Report shows the number of Australian’s who were classed as high net worth individuals (those with at least $US1 million ($982,000) in investable assets)  fell by 6.9 per cent to 179,500 — the sharpest fall across the world’s 13 largest pools of millionaires. 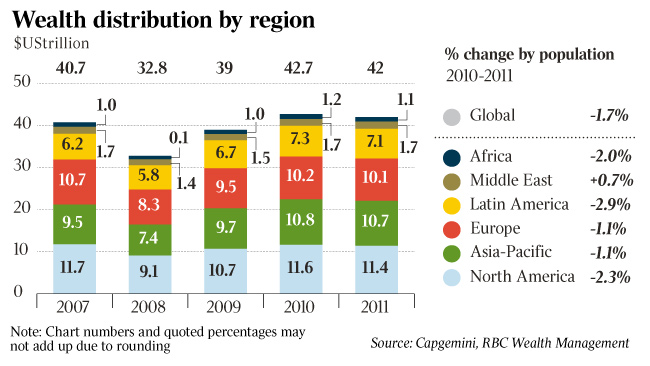 The sharp fall in the number of Australian millionaires could be blamed on falling equity markets and commercial real estate values.

“Australia’s stockmarket fell by 17 per cent last year and real estate values fell by 4.8 per cent,” he said.

The number of ultra-wealthy Australians with more than $US30m ($29.4m) in investable assets also fell, to about 1,800.

Like their global counterparts, the wealth of the ultra-rich has slipped because they tend to invest in risky and less liquid ventures such as hedge funds, private equity and commercial real estate.

“They are the big losers because their money is stuck in these investments and they cannot get the money out fast enough into safer havens,” he said.

Worldwide, the number of millionaires has remained stable, growing marginally, by 0.8 per cent to 11 million, the survey of 71 countries shows.

The Asia-Pacific region is home to more millionaires than any other region, overtaking the US and Europe with 3.37 million, compared with 3.35 million in the US and 3.17 million in Europe.

US millionaires still held the biggest share of global wealth, at $US11.4 trillion.

The Asia-Pacific region also had the largest number of young millionaires, with 38 per cent aged between 31 and 45.

The biggest winners were China and Japan, with the number of millionaires increasing by 5.2 per cent to 562,000 in China and by 4.8 per cent in Japan to 1.82 million.