The Reserve Bank announced today that official interest rates would remain on hold over the month of October.

Interest rates have now been at the current level of 2.5 percent for 14 consecutive months, the longest steady sequence since 2003.

Despite some improvement over the month, a number of states still have unemployment rates hovering around 7 percent.

Although total building approvals increased over August, approvals for houses were down with strong unit approvals again accounting for the overall rise in activity

Building approvals fell over June although some of this can be attributed to the usual volatility in unit approvals and the impact of a shorter trading month due to holiday breaks.

Although the stock market has shown signs of sustained revival, the Australian dollar remains stubbornly high. 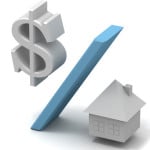 The Australian dollar however has shifted significantly downwards over the past month to year lows with the trajectory now in line with policymaker’s objectives.

The stockmarket however has weakened markedly over the past month and together with flat retail sales adds to the current mixed performance status of the national economy.

Spring housing markets have commenced with generally robust levels of buyer and seller activity particularly in Sydney and Melbourne.

Despite continuing solid buyer activity, particularly from investors in the Sydney market, price growth levels continue to moderate from the solid to strong results recorded by most capitals over the past year.

With house price growth moderating and a mixed at best economic climate, interest rates are set to remain on hold for the remainder of 2014 although a sustained deterioration of the labour market will place a downward bias on rate settings over the short to medium term.