What are property buyers doing around Australia?

The chart below illustrates the change in moving annual turnover of residential lending to first home buyers, non-first home buyers (i.e. upgraders and downsizers, which include all purchases made for owner occupation and where the buyer has previously owned another dwelling) and investors. 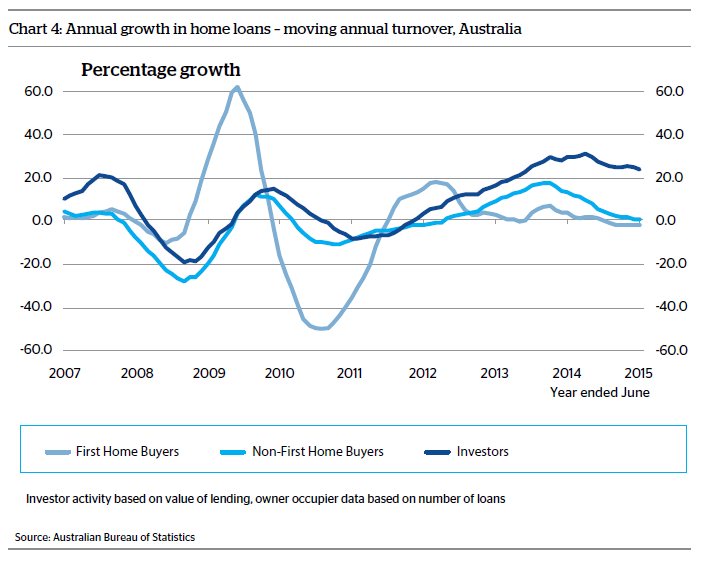 The chart indicates that first home buyer demand has been declining since the end of calendar 2014 with the turnover in loans 2.6% down over the year to June 2015.

Some modest year-on-year growth is evident in the latest data reported in June and July 2015, although further data will be required to determine if this trend is likely to continue.

Investor demand has recorded consistent year-on-year growth between 2012 and September 2014.

Although the rate of growth in the value of lending to investors has started to slow since then, it was still 24% higher over the year to June 2015 compared to the year earlier.

First home buyer demand is important because it creates demand for entry-level properties, facilitating broader demand by encouraging current occupiers to upgrade through the value chain.

As a result, incentives have often been put in place to promote first home buyer demand during times of market weakness.

Where stamp duty concessions are offered, the maximum concession is indicated.

It should be noted there are some purchase price limits for grant eligibility which vary by state. 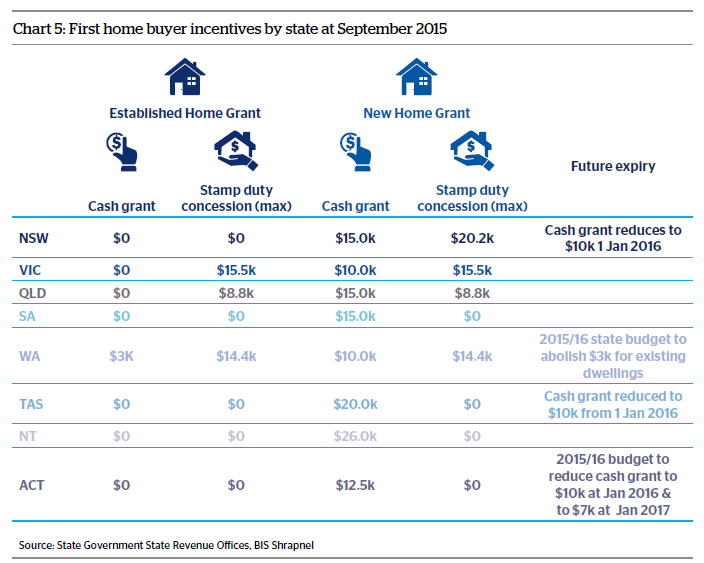 Over the past four years there have been progressive changes in first home buyer incentives across all states to favour purchasers of new homes over existing homes.

The long-term impact will be shift of first home buyer demand that would have otherwise been for established homes into the new home market, thereby adding to supply.

The short-term impacts on the market as a result of the progressive removal of incentives for the purchase of established dwellings are:

With first home owner demand being fixed (i.e. households are first home buyers only once), incentives do not create or diminish demand but rather serve to shift existing demand through time.

Once the impacts of the changes to incentives are worked through, first home buyer demand should return to long-term averages.

The impact of the removal or reduction of first home buyer incentives for established dwellings across most states has now largely flowed through.

The Northern Territory removed the incentives for existing dwellings in January 2015 and accordingly first home buyer activity in these three states is lower than it otherwise would be.

This is evident in the decline in loans to first home buyers in South Australia and Tasmania in 2014/2015.

In Victoria and the Australian Capital Territory, the stronger year-on-year growth in June quarter 2014/2015 suggests that first home buyer loans have trended upwards through 2014/2015.

Australian Bureau of Statistics (ABS) data on loans to first home buyers are derived from returns submitted to APRA.

A first home buyer is defined as “a borrower entering the home ownership market for the first time”.

The definition includes all first home buyers obtaining a loan (and not just those eligible for grants) but excludes first home buyers who are investors as the data relates to loans for owner occupied properties.

There is some evidence to suggest that an increasing percentage of first home buyers, particularly in the higher priced cities of Sydney and Melbourne, are purchasing an investment property as their first home as a stepping stone into the market. 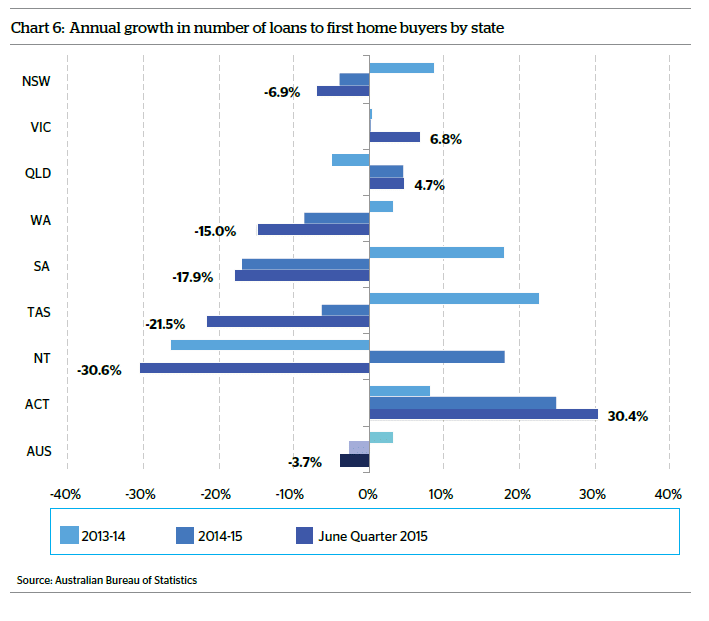 Upgraders and downsizers have historically represented the largest component of residential demand, being 44% of total residential lending activity in the past 15 years.

This is two to three times the size of the first home buyer market.

Over the past twelve months to June 2015, growth in the number of loans to upgraders has stalled, growing by just 0.3% nationally.

Some states, however, are still experiencing growth in upgrader demand. 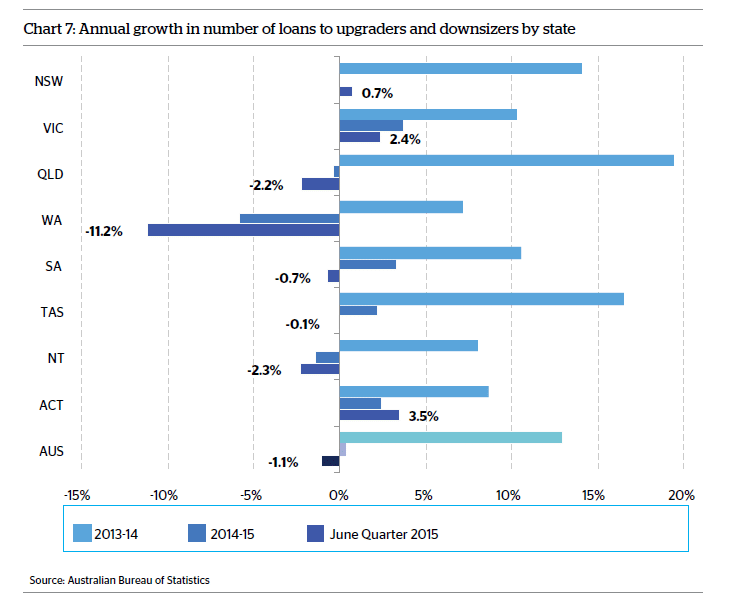 The ABS provides on residential investment in terms of the value of total loans rather than the number of loans.

As a result, changes in the value of loans over time reflect a change in values for property and purchase volumes. 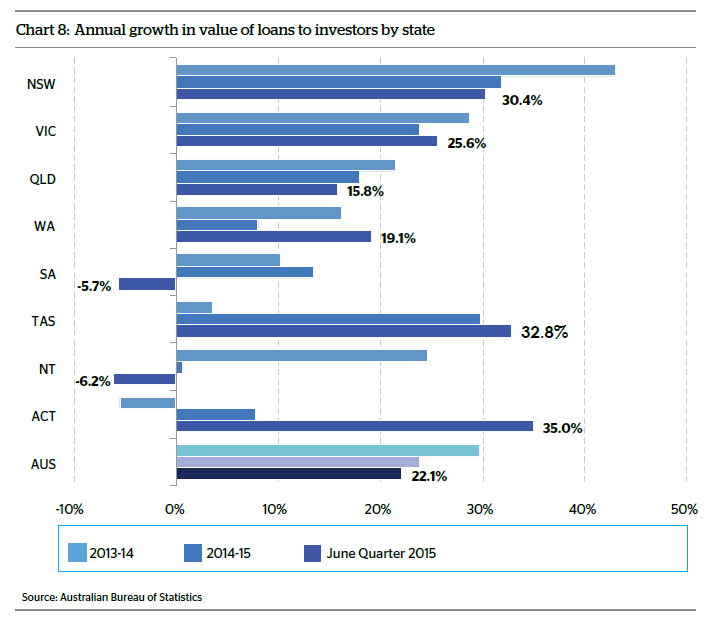 'Buyer Activity Around Our Property Markets' have no comments