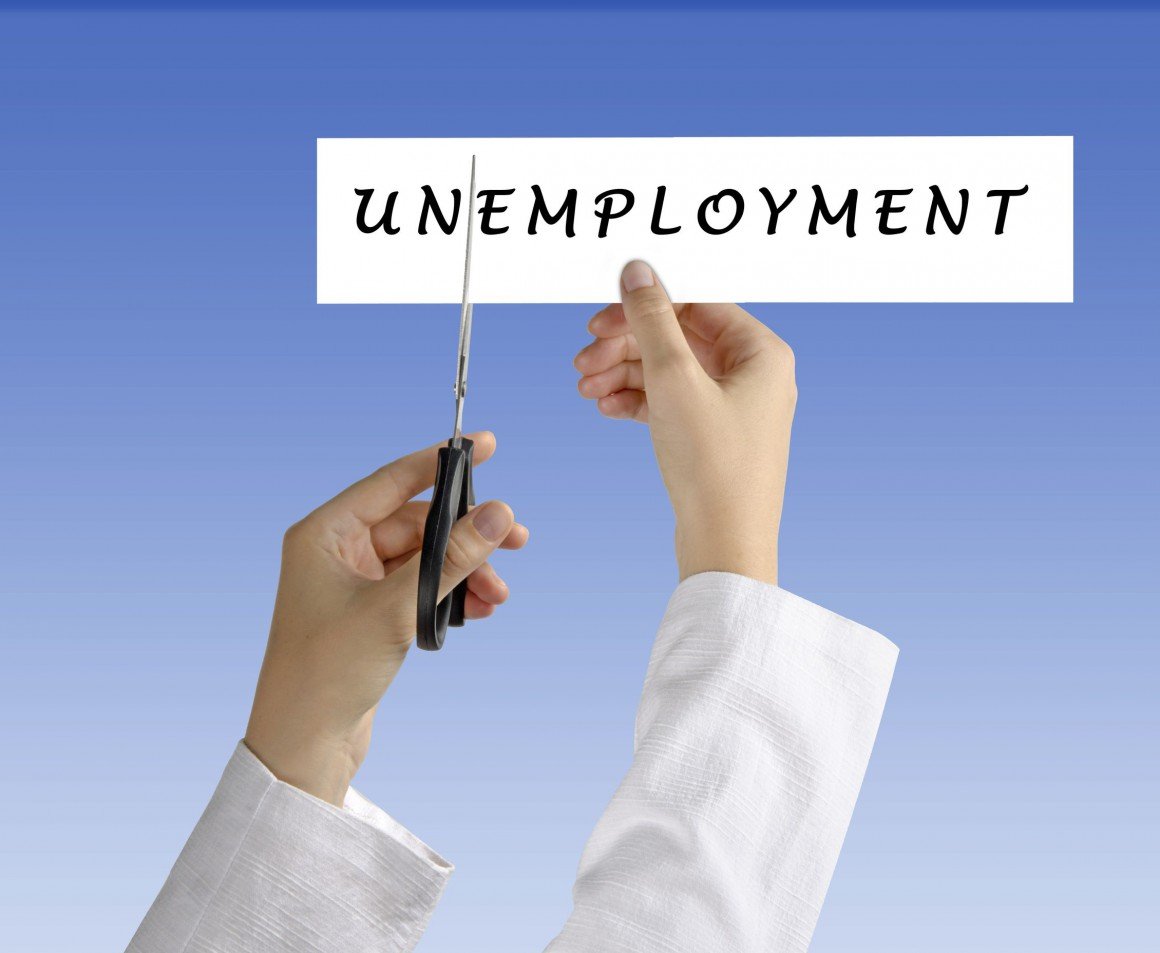 We know we are ABS reported unemployment rate is hovering around 4% and is likely to keep falling further.

But what's the real unemployment rate in Australia?

According to Roy Morgan's latest figures unemployment drops to 7.8% in March; its lowest since the pandemic began.

Now this doesn't surprise me, Roy Morgan's figures are always different to the ABS views who count people who have only been working for one hour a week is employed.

Don't get me wrong - either way this is very good news. This is the lowest unemployment rate we've enjoyed for a long, long time and that's great for the economy.

However, Roy Morgan report that under-employment increased by almost as much and was up 0.6% points to 8.4%.

Overall unemployment and under-employment were virtually unchanged at 2.36 million. 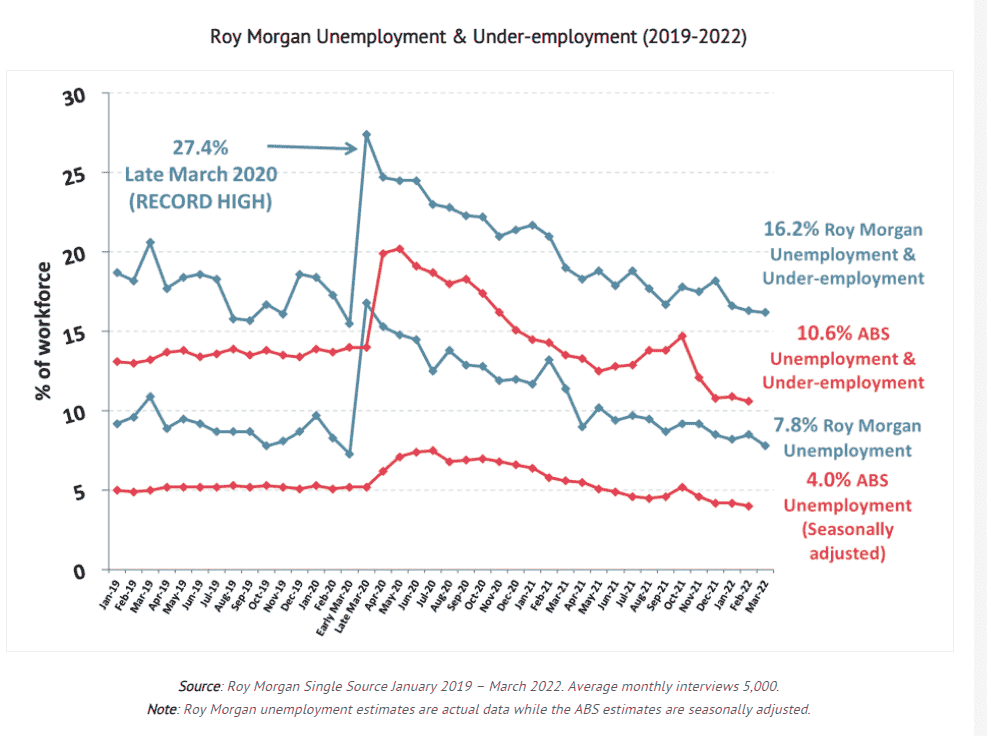 Workforce increased by 80,000 in March as employers hire more workers

The latest Roy Morgan employment estimates for March show unemployment down 0.7% points to 7.8% in March 2022 – now at its lowest since October 2019 prior to the pandemic.

The fall in unemployment was driven by drops in both full-time and part-time unemployment.

However, the concern will be that the growth in jobs in March was heavily concentrated in part-time employment which increased by nearly 300,000 on a month ago and drove the growth in overall employment.

Employment increased driven by an increase in part-time employment

The rise in part-time employment indicates that employers are taking on new workers on reduced hours as there continue to be hundreds of thousands of Australians forced to isolate at home either because they’re infected with COVID-19 or they’re a close contact of someone with the virus.

In early March the Health Department website shows the total number of Australians infected with COVID-19 dropped to a low of 202,638 (March 1, 2022) – the lowest since the early days of the Omicron wave.

The forced isolation of over 500,000 potential workers is a big driver in the rapid hiring of people into part-time employment – which also explains the large increase in under-employment in March.

Under-employment increased 0.6% points to 8.4%, effectively ‘cancelling’ out the fall in unemployment which was of a similar magnitude. 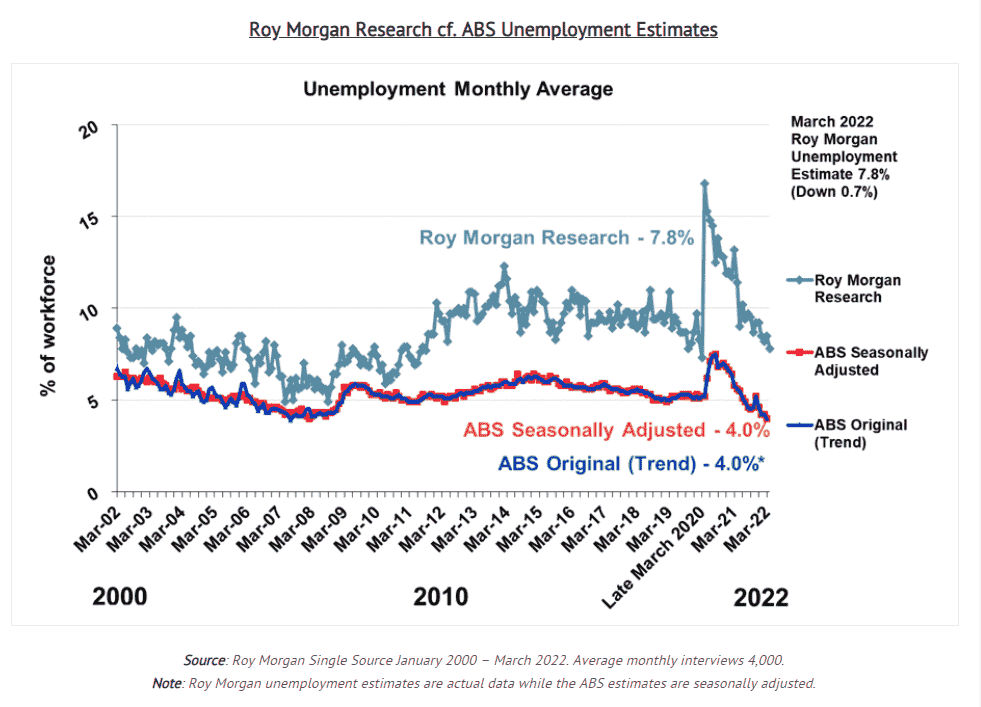 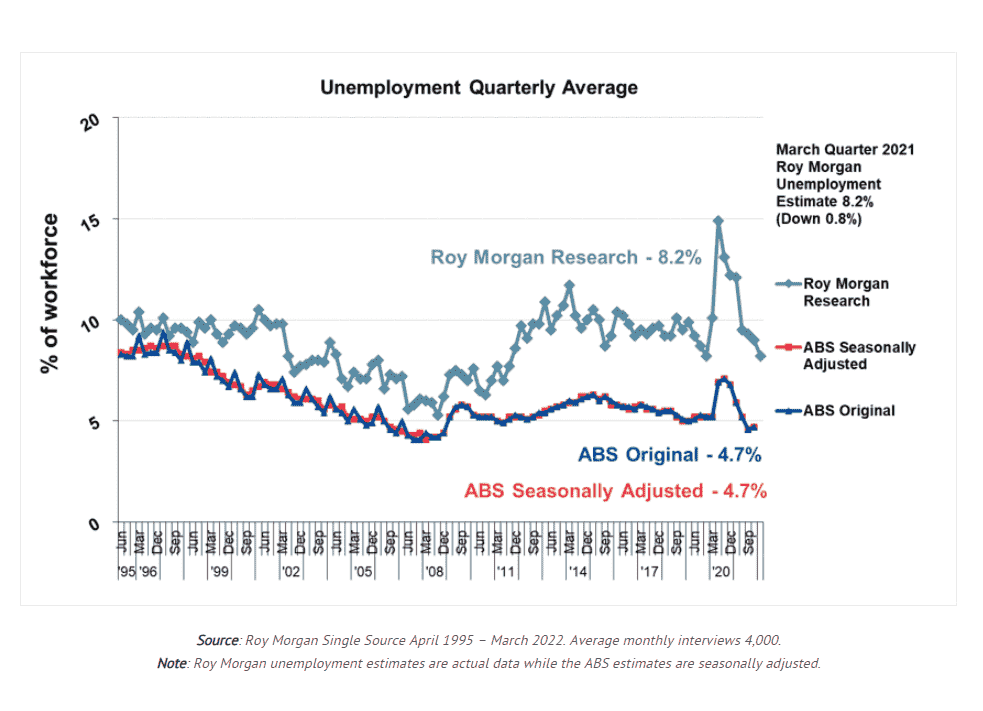 Under-employment was up in March as part-time employment increased

In addition to the unemployed, 1.22 million Australians (8.4% of the workforce) were under-employed – working part-time but looking for more work, an increase of 93,000 (up 0.6% points) from February. 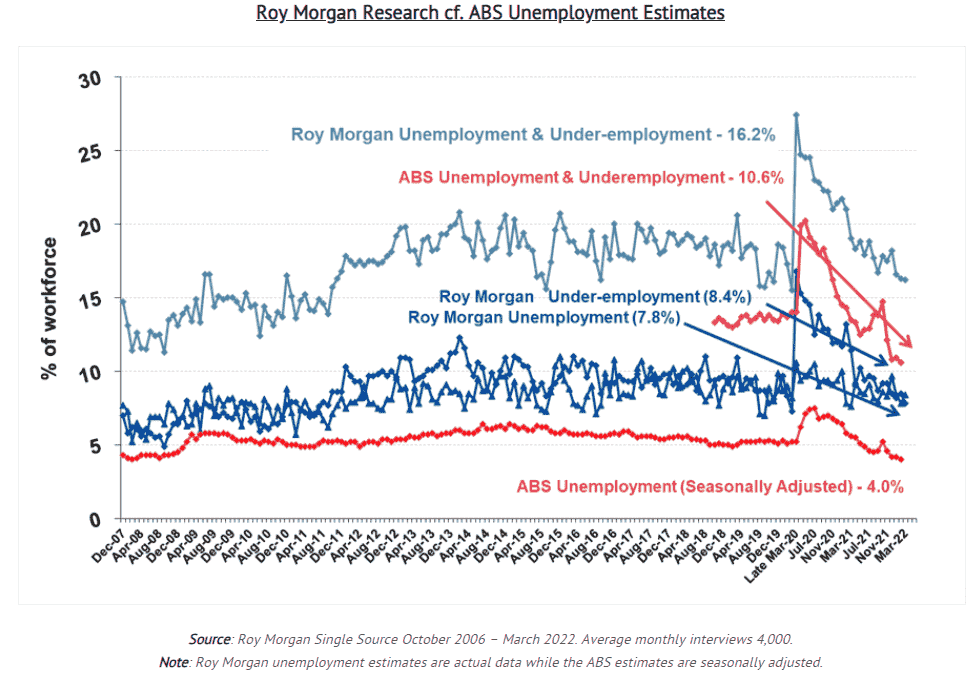 The large rise in under-employment shows a big concern for many workers in an economy that is growing, but is also experiencing rapidly increasing inflation.

During mid-March the average petrol price hit a record high of $2.14 per litre in the week before Treasurer Josh Frydenberg cut the petrol excise by 22 cents in the Federal Budget.

The large increase in petrol prices since the Russian invasion of Ukraine in late February has led to rising prices across the economy.

The price increases are being felt on supermarket shelves around the country, and the prices of food and drink at cafes and restaurants have also increased substantially during the last few weeks.

These rising prices are putting added pressure on part-time employees who need more hours to ‘make ends meet’ and deal with the inflationary pressures in the economy.

These forces are acting to increase overall under-employment and are a huge election issue for both the Morrison Government and the Opposition to tackle.

Which party will provide a solution to the increasing problem of inflation and reduce the cost of living for regular Australians – and particularly the 1.22 million Australians who are under-employed and need to work more hours to make ends meet?

In total, 2.36 million Australians (16.2% of the workforce) were either unemployed or under-employed in March, virtually unchanged from February.

Nevertheless, this is the lowest combined unemployed and under-employed since the pre-pandemic in November 2019 – 2.23 million (16.1%).