At the G20 Summit in London in 2009, UK Prime Minister Gordon Brown struck a historic deal to tackle the global financial meltdown, at the time hailed by President Obama as a turning point for the global economic recovery. 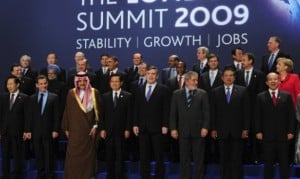 Following days of intense and stressful negotiation, Brown was able to announce that $1 trillion would be made available to countries with struggling economies via the International Monetary Fund.

In his intriguing memoirs Brown would later reveal that he was desperate to secure the deal, partly because it was a vital display of intent, unity, and international co-operation, and partly because, well, one trillion dollars just sounds like a really big number.

Both my Dad & I used to smoke when we were in our twenties, but happily Dad has lived well into his eighth decade, and therefore I reckon it’d be fair if I eventually do so too.

This is obviously flawed logic, because it fails to account for dietary habits, potential illness, reckless driving, or any number of other factors which could see the time I spend on this mortal coil prematurely ‘sawn off’.

Life expectancy is just one example of where we engage in this kind of statistical trickery and draw illogical conclusions, but there are any number of others (‘my parents only let us watch one hour of TV per day, so my kids should get the same’ sort of thing).

We’ll doubtless see a classic example hove back into view this week as the Aussie stock market is set to reclaim 10-year highs.

That’s terrific ‘n’ all, but what relevance does an absolute index number from a decade ago really have? 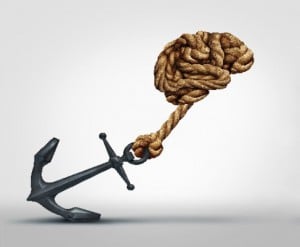 Behavioural finance tends to focus on how this anchoring bias impacts price expectation & negotiation, like when we’re buying a second-hand car (or whatever).

How anchoring is measured and adjusted over time is the subject of some lengthy & potentially mind-melting equations, but there are two worthwhile things to note:

Firstly, the less time we spend forming a price estimate, the more closely our estimate is likely to be bound to that initial anchor.

And secondly, although over time we can adjust our price expectation as we move further away from the initial anchor, typically we still don’t adjust it enough.

All the available literature tells us that, hey — too bad — we’re bound to suffer from a dizzying array of heuristics & biases, so how to overcome the dreaded anchoring bias?

In financial markets, absolute historical values, acquisition prices, and high/low watermarks tend to be common anchors, but all too often are unhelpful, misleading, or lead to poor decisions.

Acknowledging that you’ll likely suffer from anchoring bias is a great place to start.

Thereafter, don’t make snap decisions, consider whether you might in fact be wrong (it happens!), and try to take advantage of as many objective resources as you can.

'3 ways to avoid getting completely anchored' have no comments