Are you wondering what the typical Australian household will look like a decade from now?

According to the last census the typical household size is increasing and over the next decade we’re likely to see more multi-generational clans living together as continued multiculturalism and changing age demographics lead to an increase in the number of households that see children, parents and grandparents or living under the one roof.

Plus, the mix from overseas has changed, with more migrants now coming from those countries with large family units. However falling birth rates mean that the proportion of younger age groups in the population will continue to shrink in the coming decade, while the share of older groups will rise rapidly.

At the other extreme there will be an increase in those living as a couple or alone over the next decade, especially women over 60 years; and sadly most will have limited financial means.

Comparison website Mozo  suggests that digital advancements and a set of new social ‘tribes’ are set to transform the Aussie housing market by 2030, citing research from the Commonwealth Bank. 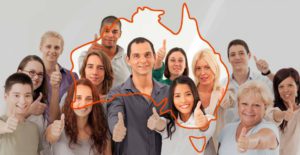 In past decades, the makeup of Australian households has mostly looked the same, consisting of dynamics such as flatting friends, newlyweds, nuclear families and empty nesters.

However, these classic “tribes” are set to change as Australia’s population evolves.

Increased high-density living, migration, multiculturalism and technological advancements were among the social changes that the report said would lead to the development of a new set of “tribes.”

“What we are seeing is the emergence of new household groups, which will have a direct impact on how Australian property is built, renovated, bought and sold,” said Dan Huggins, Executive General Manager Home Buying at CommBank.

Although most of the household groups or “tribes” identified in the study had existed for some time, the new groups expected to emerge would include the Home-Work group, Social Singles and Multi-Generational Clans. Huggins said that these groups are expected to have the biggest impact on not only the housing market, but also the future architecture of Aussie homes.

“As we become more digitally connected we are able to band together in social groups, or tribes, with people who share our values and are seeking similar lifestyles,” said Shaun Carter, from the Australian Institute of Architects.

“We are not necessarily bound to the social norms and structures that formed our past, and we are increasingly looking to housing and architecture to better reflect this freedom,” he explained.

In the fastest growing trend, it is predicted by 2030 more than 26% of Australians will be living in single person households.

Continued multiculturalism and changing age demographics within the Australian population are tipped to increase the number of households that see children, parents and grandparents or living under the one roof.

It is possible that one in three people be employed on a freelance basis by 2030. This trend emphasises the need for at home workspaces as well as more spaces for communal work.

The Peter pans are a generation of Baby Boomers, born between 1954 and 1965, who will be aged between 65 and 76 in 2030. More of these will want to live independently at home longer.

Baby Boomers don't want to live in retirement villages, but want to spend their golden years in the same locations, enabling them to continue enjoying their lives close to their families, friends and familiar surroundings.

'What will Australian households look like in 2030? [Infographic]' have no comments