While wage growth sits at a record low 1.9% against higher costs in basic needs like housing and health, and consumer confidence hits a 12 month low of 96.23, it is no wonder that people are paying more attention than ever to events such as the Census.

A flush of new data gives a clearer perspective of the state of Australian households, and how households are changing in response to factors such as housing affordability and low income growth.

Share Housing is Increasing to Keep Up With Rising Housing Costs

The 2016 Census data reveals how people are dealing with unaffordable housing in the capital cities: a rapid increase in group households.

A group household is one that consists of two or more unrelated people, where all residents are 15 or over.

Where there has been high house price pressures such as in Sydney, the number of share households rose by an astonishing 18% from the previous census against a total household rise of approximately 7%, and compared with 9% growth in group households between 2006 and 2011.

Of 1.5 million singles living in Sydney, approximately 350,000 people are living by themselves.

The number of people per household in Sydney rose to 2.8 from 2.7 at the previous Census.

While there are a number of social and demographic trends that may explain the increase in group households – such as people marrying later in life and still qualifying as a ‘group’ household – it is important to further investigate the relationship between increasing rents and deposit hurdles, and the incidents of share housing.

Indeed, the decision to marry later in life could be the result of being unable to attain a family home earlier.

The Cost of Servicing a Mortgage Declined for Homeowners

As reported in the quarterly CoreLogic Perceptions of Housing Affordability report, the toughest barrier to entry in the housing market is the deposit hurdle, while mortgage servicing costs have declined with interest rates.

The 2016 Census data suggests that since 2011, the typical household mortgage repayment across the capital cities was either unchanged, or fell (with the exception of Darwin). 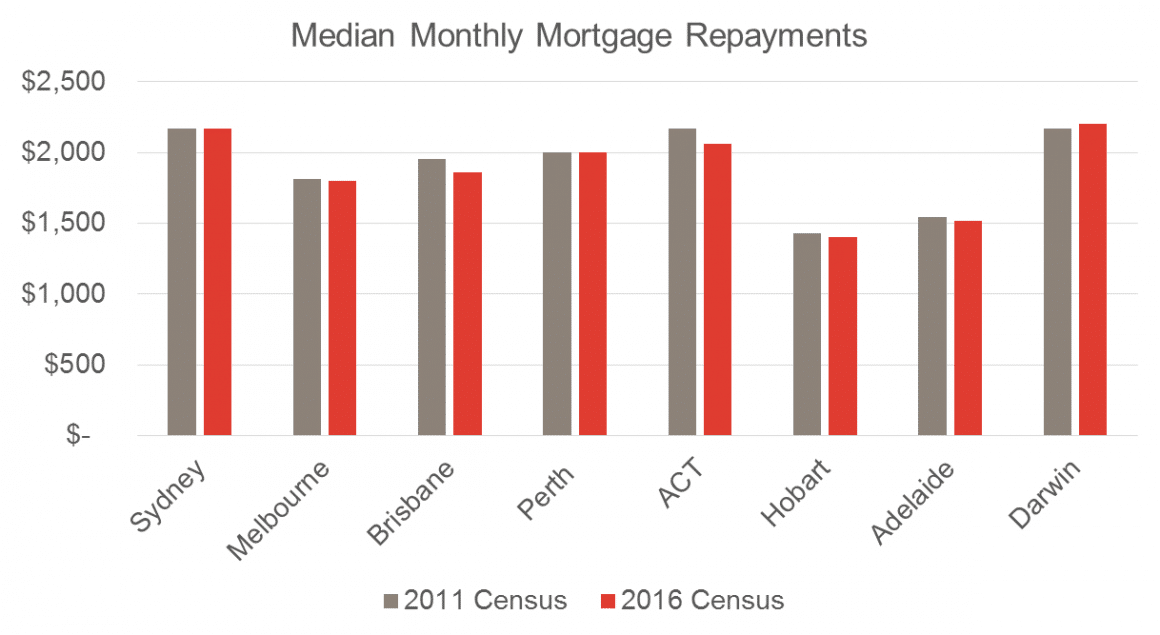 The Share of Vacant Dwellings on Census Night Increased

Vacant homes are another contentious issue in the Census.

In the context of high housing pressures and a perception of limited housing supply, anecdotes of investment properties bought and left vacant.

At the time of the census, 11.2% of dwellings were recorded as unoccupied – which worked out at 1,089,165 dwellings across Australia.

At the time of the 2016 Census, CoreLogic saw a typical vacancy rate of about 5.3% associated with market turnover.

Extrapolating that figure to the census dwelling count of 9,901,496 suggests that market turnover could account for 524,779 of the vacant dwellings at the time of the census.

Furthermore, the highest level of vacant properties from the 2011 Census were actually in areas associated with holiday making in the east, such as coastal Victoria and regional NSW, rather than in areas of high residential demand.

It is worth noting that these capital city dwelling vacancy rates were each higher than the 2011 Census results.

Higher levels of unoccupied stock provide some credence to the notion that some properties are being purchased without an intention to tenant them, however at a broad capital city level the trend looks mild. This phenomenon is most evident within inner city unit markets.

While strong capital growth in Melbourne CBD dwellings (of 25.7% between the 2011 and 2016 Census) supports continued dwelling construction to meet investment demand, rental income for vacant dwellings may be desirable once interest rates rise, and capital gain returns soften.

'Three Unique Housing Insights From the 2016 Census' have no comments