No surprises that with the property market on the upturn, the usual parties are back talking up investing in property in remote locations.

Recently, SMH reported that Cairns might be about to “awaken from its coma”. More than a dozen years ago now some ‘positive cash flow commentators’ were tipping buying off-the-plan in Cairns as a smart investment, ostensibly for the strong depreciation benefits and high yields (I think they were the only reasons given; I certainly can’t think of any others). 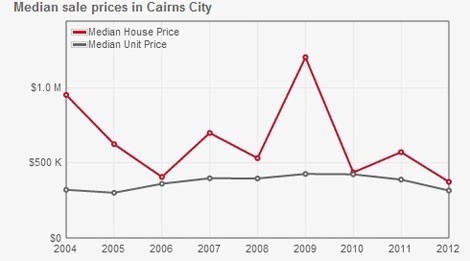 There may have been marginal capital growth in apartments over the years, but it’s not the growth periods in these low-demand or speculative regions that worries me.

It’s when the downturns hit, and according to SMH dwelling prices fell by 30% or more in Cairns through the Global Financial Crisis (GFC), wiping out the previous gains.

According to SQM Research asking prices have continued to fall over the past four years. Parts of the Gold Coast suffered a similar fate through the GFC.

The opportunity cost of taking heed of this bad advice had you taken it would have been been nothing short of immense. In that time you could simply have invested in a few quality, well-located properties in Melbourne or Perth (or pretty much any capital city) and secured your financial future.

Undeterred, positive cash-flow investors then went on to promote serviced apartments in hotel complexes for strong rents (each to their own, but I’d file that under ‘B’ for ‘Bad Advice’ as well) or investing in all manner of tourism properties (refer GFC above) and other unusual locations (basically “any property” which produced a positive cashflow) located hours away from job centres and where most people prefer to live and to invest.

While many regional properties have been underpeforming investments for years now, today the hot sectors of the property market include certain parts of Perth, Sydney’s inner west and Sydney’s north shore.

As noted, Melbourne has already experienced a phenomenal price boom from 2007. Brisbane has been in the doldrums for some time; but its time will surely come again.

As for Darwin, well prices keep on rocketing, and they may continue to do so. It’s a crazy market up here in the Top End, with ultra-high prices these days for such a small city – generally, I don’t like crazy markets, but good luck to you if it’s your thing. A key factor in determining the return on any investment is the entry price, so in my opinion better value now lies elsewhere.

It’s often said that land appreciates while buildings depreciate and require maintenance, and this is by and large true, so it is vital to invest where there is a massive and growing demand for a limited supply of land.

It’s pretty simple really, because every demographic statistic tells us that the capital cities are where these trends are playing out.

In this recent blog post I noted how in Port Augusta, by way of an example, vacant land prices clocked in at only a few thousand dollars as recently as 2004.

To all intents and purposes, from an economic perspective, the land had a value of approximately $nil – there were plenty of lots potentially available for release and there hasn’t been much demand from the small population.

So how, then, have median house prices increased all the way up to $175,000? Because it costs more than that to construct and then sell a house for a worthwhile profit these days.

As new houses come on to the market in regional towns, the median price tends to increase. Unfortunately new builds often don’t produce great capital growth as the initial buyer tends to suck up much of the developer’s costs and profit margins.

And this dynamic doesn’t do much for the price of existing dwellings either, which become less popular as compared to the shiny new builds.

Property investment was ‘easy’ in the 1970s and 1980s for those who were actually born and had access to capital, for inflation was raging and the value of debt was quickly inflated away.

Plenty of regional properties did go up in price a fair amount between 1990 and 2007 too, but then, so did nearly all property prices in Australia, because interest rates fell dramatically and we went on an almighty borrowing binge.

However, long-term regional growth rates have still been relatively poor as you can see on the websites of data providers, which is reflected in low median prices today, and regional price growth has stalled for some years now as the first chart above clearly shows. 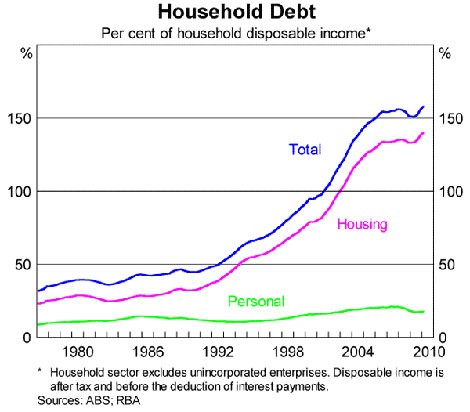 The borrowing boom cannot and almost certainly will not be repeated, and certainly not in remote, owner-occupier regions where few elect to invest.

House prices cannot continue to be inflated by ever-greater leverage and household debt. Material price growth in the future must surely only be sourced from real wages growth and investor activity, which largely occurs in some key sectors of our capital cities.

Someone will always be making money from real estate, but if you’re an investor you’ll have to be smarter than before, and do two things very well if you are to succeed:

(i) invest counter-cyclically; and

The average household persons per dwelling has plummeted over the past century, so medium-density dwellings such as two-bedroom properties may be a good bet, but only in quality locations in cities where the population is booming and where large plots of land cannot be released.

In my opinion, for most regional towns the best case scenario over the next decade is that property prices increase in line with inflation as construction costs increase.

However, inflation is likely to remain relatively low so capital returns will also be stunted. The worst case is that prices slide backwards for a decade.

The RBA recently released this revealing chart, which shows that even in our major capital cities, in the fringe suburbs where demand is low, land is relatively cheap.

Sydney’s urban sprawl is constrained by the Pacific Ocean and National Parks on all sides, so greenfield sites as a general rule cost significantly more, especially with the city’s notorious NIMBYism.

The chart demonstrates that where demand is low, dwelling price movements are predominantly related to construction costs, government levies, and service and finance.

Price growth in low-demand locations consists less of the price of land, which remains a small component. Meanwhile in the prime city suburbs even barely inhabitable hovels can fetch hundreds of thousands and sometimes even millions of dollars due to the great demand for the land in these plots.

While prices could increase steadily in low-demand areas as construction becomes more expensive, I believe this to be a risky approach to investment and one which introduces a significant potential for capital loss.

It’s all too easy to generalise, so let’s look at an example: the NSW south coast, which has been tipped by the cash-flow investors over the last few years.

Unfortunately, no sooner did the region become nominated as a hotspot in 2010 than BlueScope Steel announced a major round of redundancies…with more following later. This is a salient risk of investing in regions dominated by few industries.

In the last decade, whereas a counter-cyclical capital city investor would have been looking to invest in a property which doubled (or more) in value in, say, Melbourne or Perth, prices in the Shoalhaven region appreciated by 12.5%.

Even in Sydney which would have been absolutely the last city you’d have picked on a counter-cyclical basis after its preceding boom to Q1, 2004, you might easily have achieved 40% capital growth in a quality inner or middle ring suburb.

As I discussed in this post, an investor in Melbourne could comfortably have achieved annual capital growth of a 9-10% compounding annual return since 2000 for well over 150% growth, which blows away equivalent returns from the vast majority of regional property investments.

As ever, don’t take my word for this: speak to experienced, independent Buyers Agents (not regional estate agents) about where long-term capital growth has been and will be found, and they will answer this riddle for you.

In theory, I suppose you could pick a regional hotspot, but as we’ve seen above even the positive cashflow commentators do it poorly, so your chances of long-term success in today’s highly-leveraged environment are accordingly reduced. 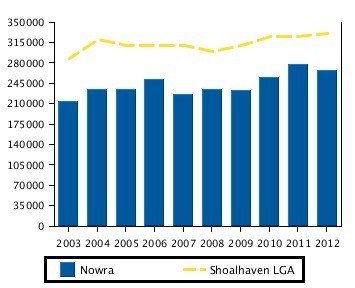 Different data providers give slightly different results. Realestate.com.au in their chart below shows median house price growth in regional ‘hotspot’ Nowra, for example, of 13% since 2004 (and unit price growth of, well…essentially nothing): 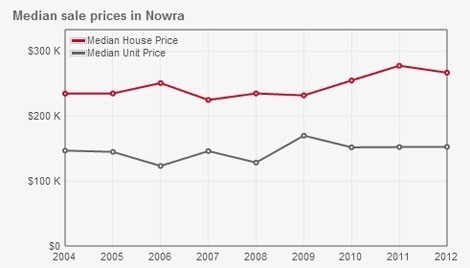 The broad statistics don’t quite tell the full South Coast story, for median prices in the region (sadly, because it’s a beautiful part of the world) are being pumped up by extraordinarily ugly new housing estates.

You might argue that there are better times ahead for the NSW South Coast. Maybe, but I remain sceptical. There may be a moderately increasing demand, but there has been much land potentially available for release, and worse, it is being released.

While capital cities have been undergoing an investor-led recovery over the past 12 months and recording non-trivial capital growth, median prices in the Shoalhaven region have slipped backwards into a downtrend. 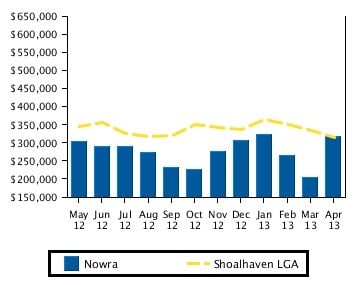 So why do the experts tip regional property. A few reasons:

(i) higher initial rental yields: more than 7% on the South Coast; or

(ii) kickbacks from developers in the regional towns they tip; or

(iii) they own investment property in the regions they recommend.

You might say that I’m also ramping regions where I invest around London and Sydney.

Maybe, but the key difference is that the population of London is more than 8 million and that of Sydney is more than 4.6 million, so I don’t think my blog will have much impact. This is not necessarily the case in some small regional towns where it’s possible to undertake a ‘pump and dump’.

Property investment is a long-term game, so keep it simple and invest in suburbs where the demand is continuous and growing. You’ll do much better over the long haul. 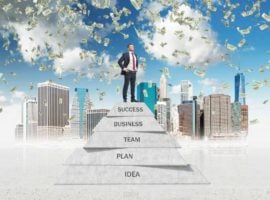