Population growth in Australia is a problem mainly because of the lack of a coherent national policy to manage it – the focus needs to be on maintaining quality of life through sustainable growth, writes …

This is part of a major series called Advancing Australia, in which leading academics examine key issues facing Australia in the lead-up to the 2019 federal election and beyond. Read the other pieces in the series here.

Australia has a problem with population.

It’s a problem with the potential to result in enormous chaos, risking the nation’s economic well-being.

And this problem is moving like an overcrowded Sydney train, careering out of control towards inevitable carnage.

Much of this population problem is of our own making: past demographic successes and policy and funding complacency have created a ticking time bomb.

Politicians have struggled to manage the population problem, but no longer have the luxury of looking away.

With the dial on public sentiment set to outrage, fuelling a population problem far removed from reality, it’s time for a reasoned consideration of the population policy needs of Australia.

An effective population policy would focus on quality of life, from the cradle to the grave.

The problem with population

Australians’ average life expectancy is among the longest in the world.

Much of our longevity is thanks to medical technology and investments in childhood immunisations.

Access to birth control allows greater freedom to choose the number of children we have.

Women have benefited from social change that has enabled a world outside the home and transformed traditional caring roles – although gender equality remains a work in progress.

We’ve invested in ourselves, and the investment has paid off.

But our successes have created a different demography.

We’re living longer and not replacing ourselves through births.

The result is a bigger bulge in the relative proportion of older people, an ageing population.

Population ageing in its own right isn’t a concern.

The challenges it poses can be turned into opportunities.

Difficulties come from the balance of the population contributing income tax versus people no longer in the workforce.

As government coffers get tighter, determining what should and can be funded is a challenge.

For example, the education needs of young people will compete with the growing healthcare costs of older people.

Immigration has featured as an important complement to natural increase (births minus deaths) as a way to offset the shortfall in the workforce resulting from population ageing, as well as enriching our multicultural nation.

Australia’s policy response to the challenge of an ageing population have been inadequate. In the absence of any coherent policy, the nation’s economy has come to rely on a quasi-population policy.

Governments use an immigration ceiling as the lever over time to respond to workforce needs stemming from demographic pressures.

Immigration is the easiest of the demographic levers to pull.

But focusing solely on immigration as an approach to population policy undermines the suite of issues that comprise the full population puzzle.

Australia has grown at a higher rate than most OECD countries.

Overall population size, age structure and density, and a country’s stage of economic development are factors that help explain this.

An obsession with the rate of growth has plagued public discourse and pressured decision-makers to bow to populist fears.

An example is cutting immigration intake contrary to the evidence.

Population growth, and demography generally, is seen as an inevitable thing: destiny.

Demography as destiny appears to have been the motivator for successive Australian governments to simply shut their eyes to the issues of population growth.

Where people live across Australia has become a major focus, particularly in the main destinations for immigrants: Melbourne, Sydney and Brisbane. Concerns have been raised about inadequate infrastructure in our main cities.

A coherent whole-of-government population policy is a priority for Australia’s government.

Population policy is too often overlooked because, let’s face it, it’s hard. 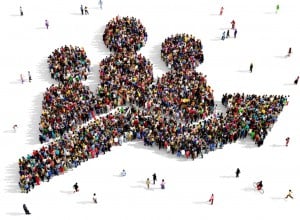 But solving the population problem is crucial to Australia moving forward without the presently inevitable train crash.

Education and employment, healthcare, transport, housing and the environment must feature in a joined-up approach to population policy.

Effective population policy would be to set a blueprint for the future of what we want and should be, then mapping milestones to ensure we’re tracking against the aims.

This requires significant commitment and transformation in government and in public sentiment – no easy feat.

There is no need for an overall population target, or growth target.

The current immigration intake ceiling is about right. If anything, immigration could be increased.

The first steps toward a solution for Australia involves taking back the narrative of population, from problematising to problem-solving.

We all have a role.

The focus needs to be on advancing a fair Australia by creating opportunities out of the challenges of population ageing.

That means investing in Australians (locals and migrants) to live quality lives.

Quality of life is one thing that unites all Australians, regardless of whether they’re pro-immigration or not.

This is how all Australians can be appealed to in order to gain buy-in from the electorate.

Commitment from politicians to avoid divisive practices could be harnessed through innovation narratives.

Public engagement with the process of making opportunities of population ageing challenges could be achieved through a program similar to the Challenge of Change campaign.

Ideally, such an undertaking would not be partisan.

In the medium term Australia needs to plan for growth, even if immigration were to be cut.

Accommodating population growth is about planning, including adequate funding.

Sending migrants to regional areas and imposing punitive measures if they try to leave is not the answer.

Cities are the main receivers of migration because this is where most of the population lives, and thus where the opportunities exist.

Australia must have strong global cities.

To this end transportation, housing, employment and education in the major cities should continue to be built upon.

At the same time, promoting regional living for overseas migrants and locals is a worthwhile endeavour if essential infrastructure is adequate.

Population is ultimately a bunch of people with aspirations and dreams trying to find their way.

We just need the leadership.

'Solving the ‘population problem’ through policy' have no comments