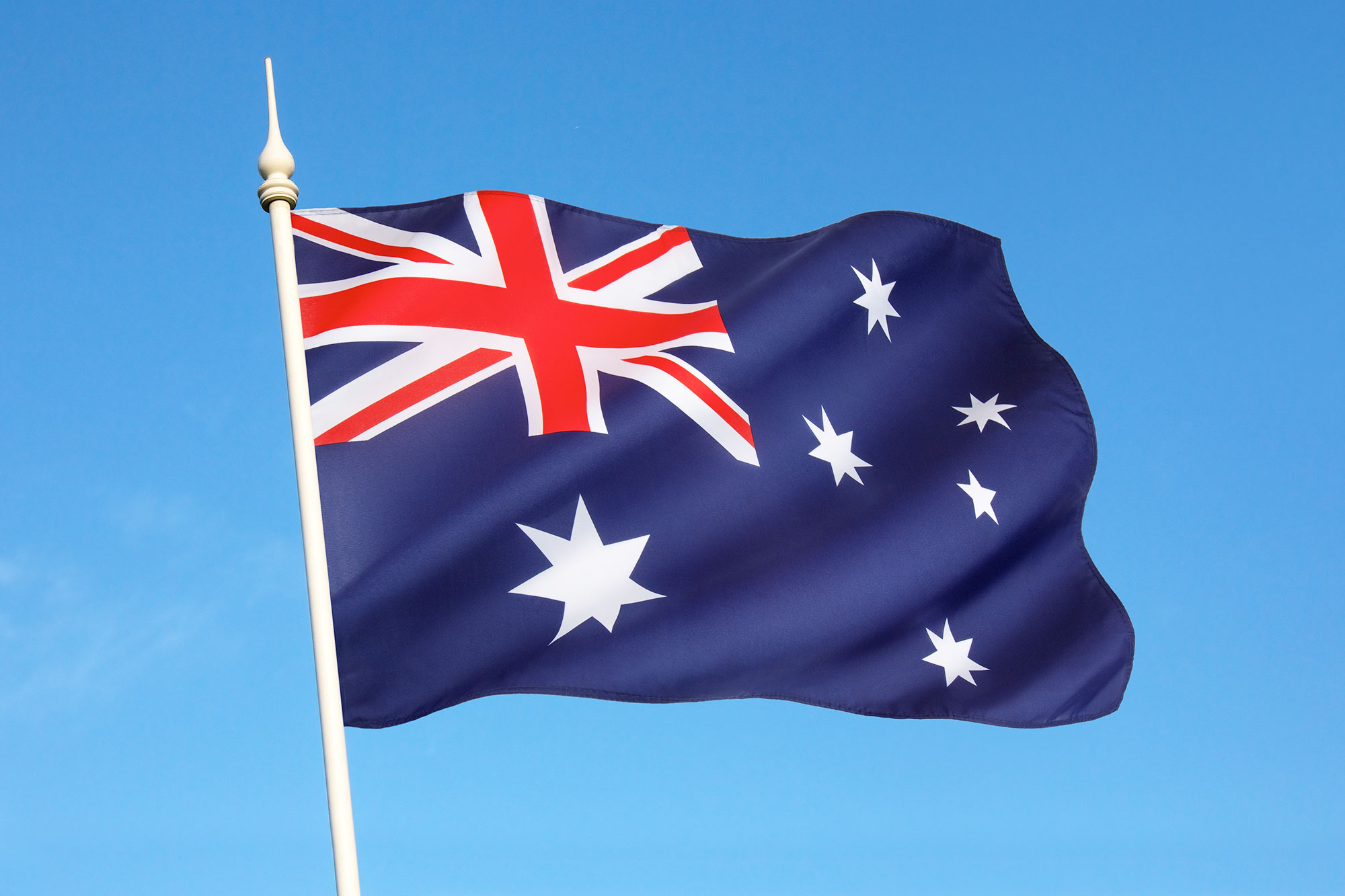 Has there really been a revival of regional property?

It seems that everywhere you turn these days some talking head is prattling on about regional population growth. 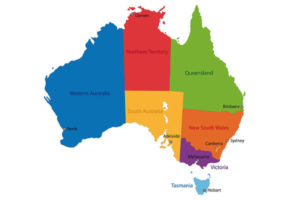 This post aims to provide further clarity to this conversation.

I have included two tables and two charts to help explain why I think it is a load of poppycock and that the regions aren’t growing that much at all.

Let’s start at the top, shall we?

This is an increase from about 24,000 such movements the year before. 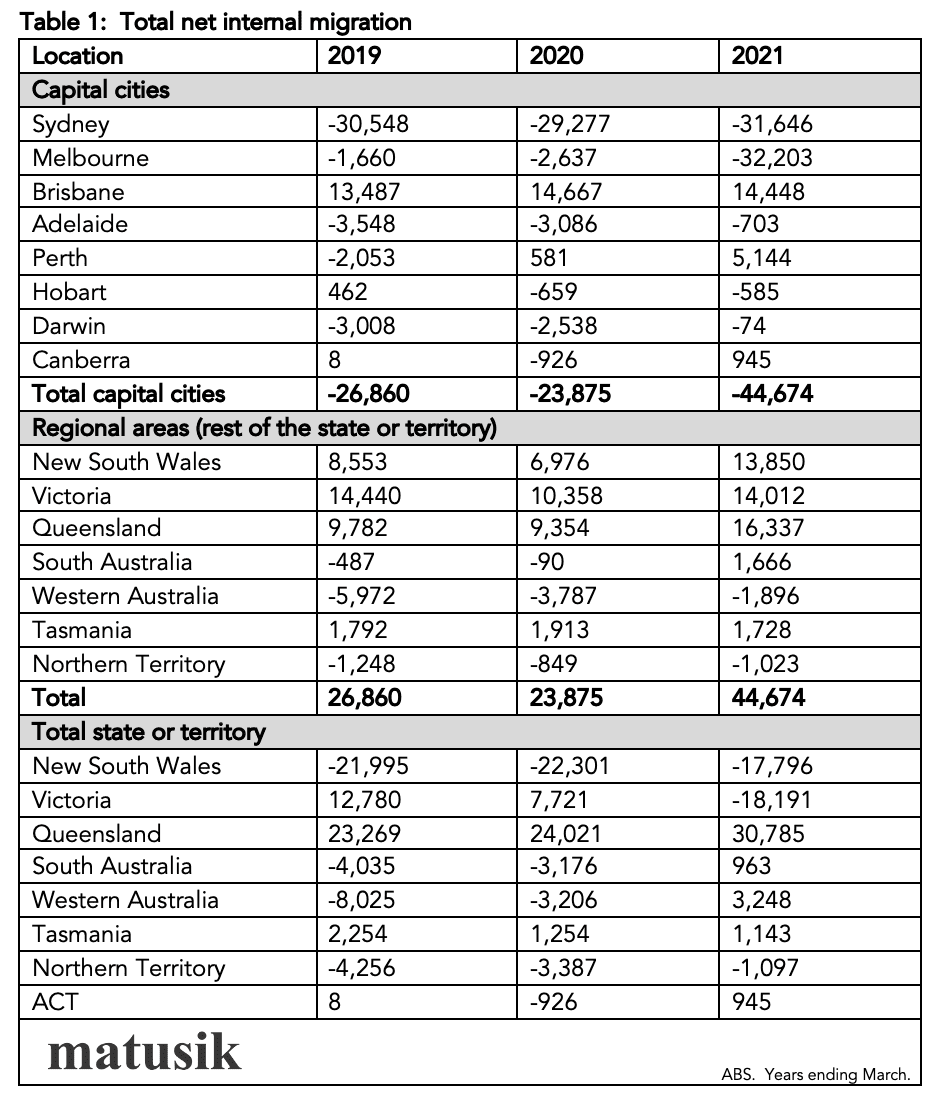 So, the press and regional spruikers cannot help themselves and shout something like “Regional population growth is booming!”.

Victoria seems to be on the nose and Queensland appears to have an increasing appeal but despite all the ruckus the recent internal migration changes (outside of Victoria) are really minor when it comes to total population growth.

Chart 1 shows net internal migration movements to regional Australia over the past decade. 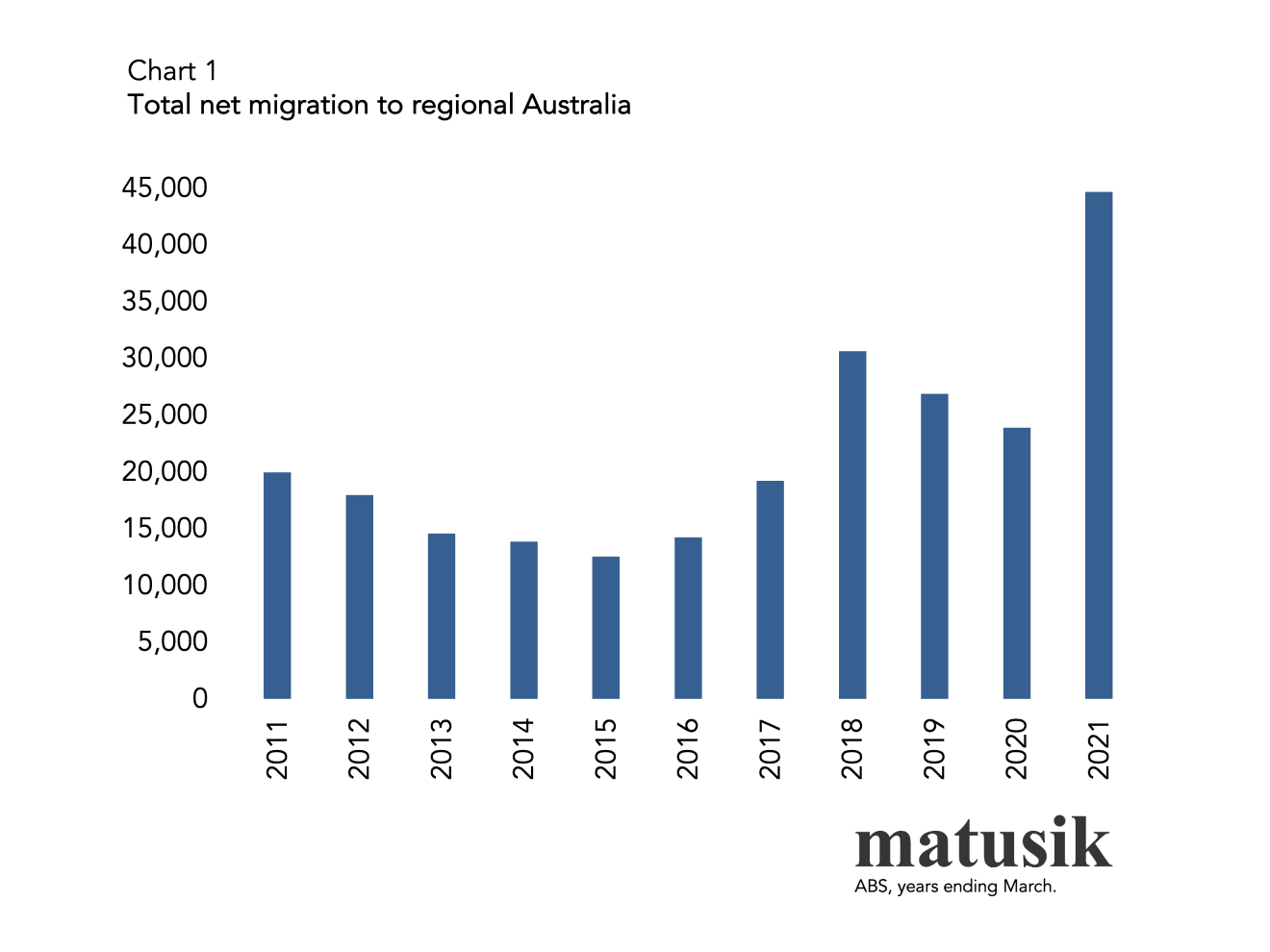 Table 2 breaks up the net regional internal migration numbers over the past three years by age group.

Most who move to (and/or stay in) a regional locale are middle-aged or older. 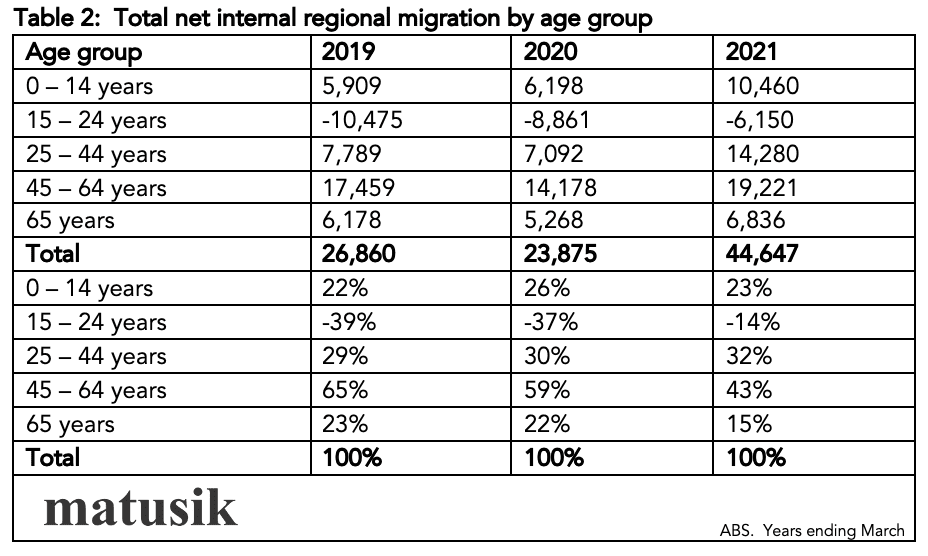 Much has been made of the 14,300 millennials that appear to found regional Australia appealing over the last twelve months or so.

This volume has doubled during the pandemic yet makes up just 32% of the overall internal regional migration market.

Remember that migration is a net result.

It involves people arriving and people departing from a particular location.

And when factoring in arrivals and departures, you find that whilst the number of incoming millennials has lifted by 5,000 to regional Oz over the last twelve months, the number of similarly aged residents who didn’t leave their regional abodes rose by 10,000.

And here lies the problem with this whole debate.

Many who would normally leave a regional town – and in the main, they are young folks – haven’t, mostly I believe because they really couldn’t, due to Covid-related restrictions.

Overseas locations and our capital cities offer much more in the way of job opportunities, wider social contact and to be honest more cultural experiences.

I believe that once travel restrictions are removed many millennials (and others) ‘stuck’ in regional locations will again move to the big smoke or overseas. 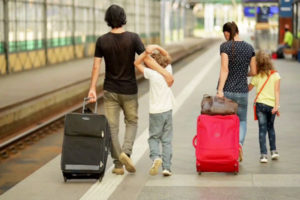 This includes those wayfarers who tried a bit of the provincial life during the pandemic, but now that they have to return to the office, even if it is for only a handful of days per week, they are finding the commute too much.

Factor in $2+ per litre petrol prices plus the risk of a global recession and we might even see a stampede back to the metropolis.

For mine, chart 2, brings home the bacon and it shows falling regional departures versus somewhat limp increases in regional arrivals during the Covid period.

Subtracting departures from arrivals get you a rising net internal regional result. 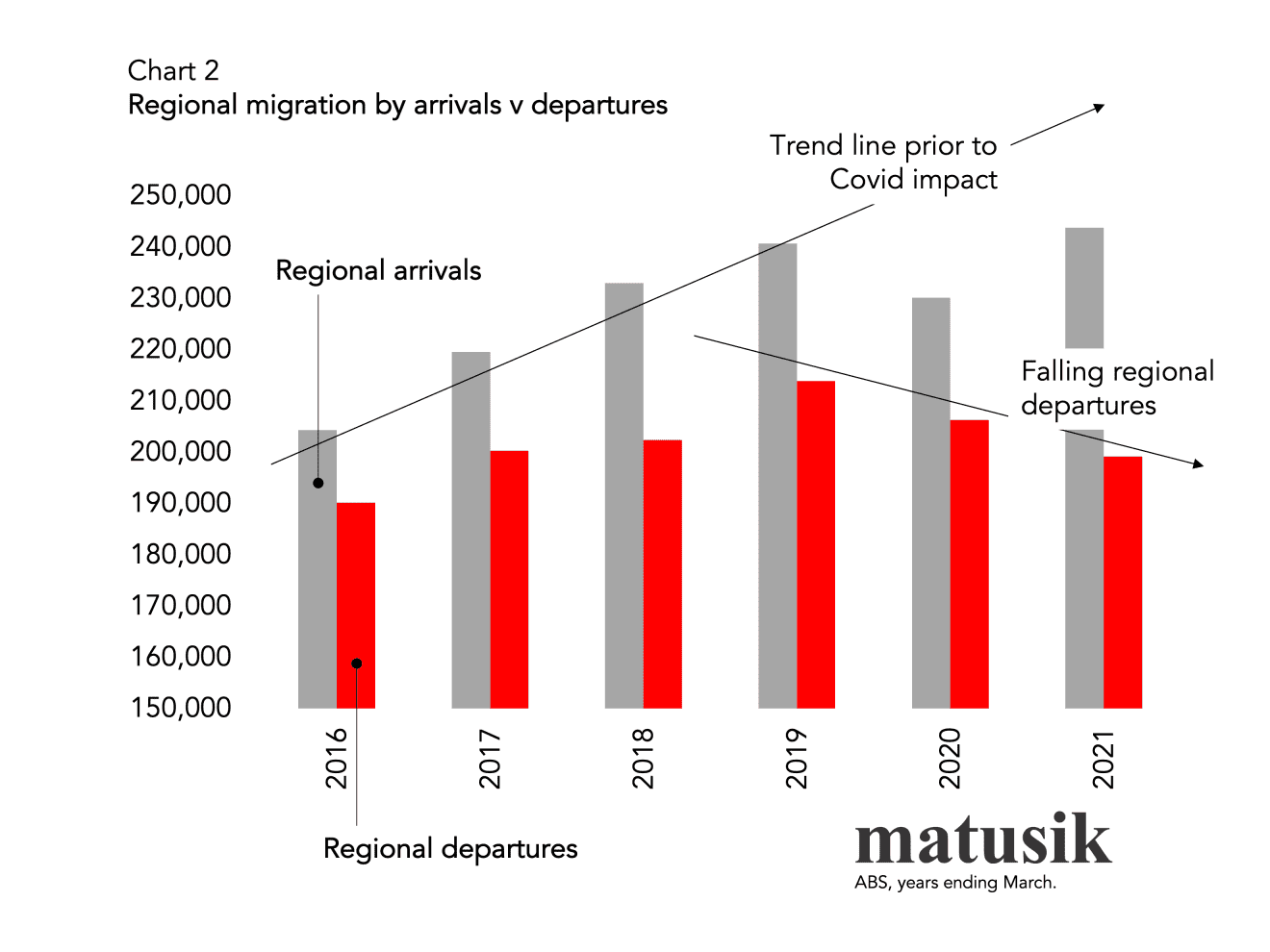 In fact, the pandemic’s impact has seen a decline in the number of internal regional arrivals when compared to pre-Covid trend (revisit chart 2). 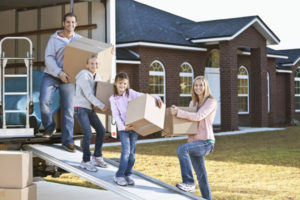 And further muddying the water is that outer urban locations, like the Gold Coast, Sunshine Coast, Newcastle, Illawarra, and Geelong are included in the official regional migration figures.

One must ask if these conurbations are truly regional locations.

If there is a traffic jam each morning and afternoon on a location's border, one must wonder if that place is really acting like a regional town or city.

And if the real coverage of how a major urban metropolitan area works these days is embraced, then I reckon that regional Australia, on the whole, would be at best stagnant when it comes to population numbers.

You have to do something of significance before you get a revival.

Building a stadium or hosting an event just doesn’t cut it. 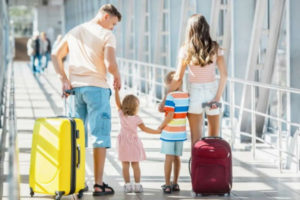 Moreover, as a close mate of mine recently mused

“You are always best going to somewhere, rather than leaving a place”.

And this post was written by someone who a few years ago did move to a true regional location.

And from my worm’s eye view of things, of the ten households that we know who moved from interstate and live around us, three have already returned to the previous state/city and two more are seriously considering it.

And we are all old coots!

Vabene - the author, Michael Matusik, has provided facts based on evidence and numbers and interestingly is one of those who sold up in Brisbane and moved to regional Australia

Expressing your opinions and beliefs as ‘facts’, does not mean they are facts or a reliable, adequate answer your own question. Have you focus grouped or surveyed anyone?