After a 7 year run as the world's most liveable city Melbourne has been dislodged by Vienna at the top of the Economist Intelligence Unit’s global liveability index. 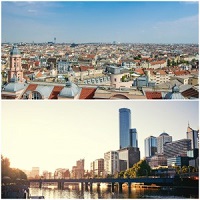 This ends a record seven consecutive years with Melbourne being in the #1 spot - but number 2 isn't rally bad, especially when you consider Melbourne and the Austrian capital are separated by just 0.7 per cent.

And Australia punches well above it's weight with Sydney and Adelaide also making it into the top 10 list.

Perth was ranked 14 and Brisbane 22

Vienna and Melbourne scored maximum points in the healthcare, education and infrastructure categories.

But while Melbourne extended its lead in the culture and environment component, that was outweighed by Vienna’s improved stability ranking.

"It may be argued that violent crime is on an upward trend in the top tier of cities, but these observations are not always correct. Although crime rates are perceived as rising in Australia and Europe, cities in these regions continue to boast lower violent and petty crime rates than the rest of the world."

At the other end of the scale, Damascus retained last place, followed by the Bangladeshi capital, Dhaka, and Lagos in Nigeria.

The survey does not include several of the world’s most dangerous capitals, such as Baghdad and Kabul.