I know some “experts” recommend investing in regional Australia, but I wouldn’t.

In fact our investment philosophy at Metropole has always been to only invest in the 4 big capital cities where there are multiple growth drivers.

Sure some regional centres are  great places to live and bring up your kids, they are not the right locations to invest in property.

Jobs growth is slower there, unemployment is higher, wages growth is generally lower and there is no shortage of land.

And this obviously translates to lower population growth.

This has once again been confirmed by id.com.au, the population experts who found that Australia’s population is further concentrating in our Capital cities.

We are urbanising and centralising our population at a significant rate.

This varies quite a bit by state. 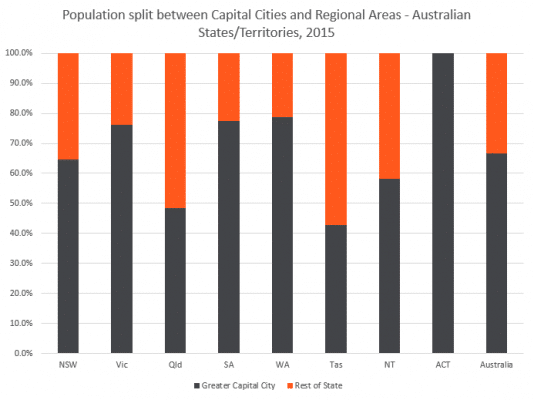 The most centralised states are Western Australia (78.7%) and South Australia (77.5%), while the least centralised are Tasmania (42.8%) and Queensland (48.3%). Note that the ACT is considered 100% urban, with the whole territory being classed as Greater Canberra – hence it is 100%.

Looking at the growth over the past 5 years, though, from 2010 to 2014, there has been far more in our capital cities than in regional areas.

Nationally, over 5 years, 77.9% of population growth occurred in Greater Capital City areas, and only 22.1% in regional areas.

Here is the state split. 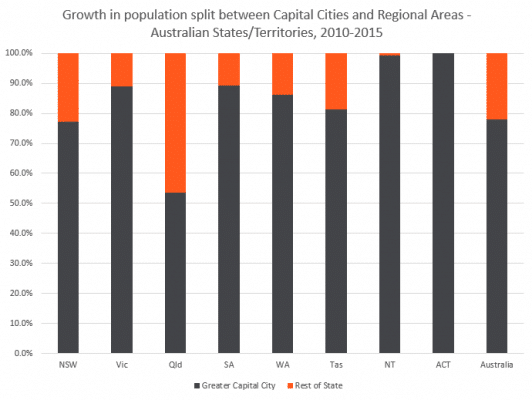 Here’s where the growth is:

Regional Northern Territory had a decline in population, so can’t be represented on the chart as more than 100% of the territory’s growth was in Darwin.

A massive 66.5% of all national growth was in Sydney and Melbourne.

Clearly  this is also where the jobs are being created.

Steer clear of regional properties and invest in the big smoke.