Harry Dent is back again, scaring the pants off ordinary Australians

There are always bubblers and doomsayers around predicting the bursting of Australia’s property bubble.

But recently US demographer Harry Dent has been wandering around the country telling anyone who’ll listen to him that we’re on the verge of an economic winter and when it comes, the fallout could be worse than even the Great Depression of 1929. 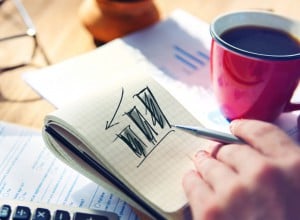 I had a chance to interview Dent, one of the world’s most controversial economists, on my Michael Yardney Podcast and hear him predict that the stock market could possibly crash 80% just weeks or months from now, and that our property markets will eventually crash with Sydney real estate house prices likely to drop by as much as 40%.

Now Harry comes to Australia ever couple of years, usually when he has a new book to promote (as he does this time), throws the cat amongst the pigeons by predicting Armageddon and in the process gets lots of publicity for his books and seminars.

Only last night my sister, who knows little about property asked me: “Is the value of my house really going to drop 40%? I heard some American guru on TV say that’s what’s going to happen.”

So, is Dent right this time? Are we in for a property market collapse?

What’s all the fuss about?

Having spoken personally with Dent I could hear the conviction in his voice as he explained how “Every boom must bust” and we are in more than a boom… “we’re in a bubble.”

“This bubble is unlike any before it because governments are unnaturally propping up the economy using quantitative easing.”

“Governments are pouring money into the economy. It’s not going to the average person, its going …to corporations (who are) buying back their own stocks with almost zero cost money. That is a fake boom.”

“So, this bubble doesn’t even have the fundamentals behind it. Which means that when it does burst, it’s going to burst worse than the last bubbles did.”

Dent predicts that our stock market will crash after the Chinese property market crashes, but the world-wide fallout will be a worse than the Great Depression of 1929.

Is this something new? 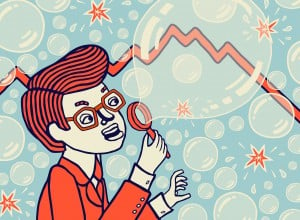 Interestingly Dent made similar prediction in 2011, 2012, and 2014 as did The Economist and Demographia.

In early 2014 Dent came to Australia warning that when the China Bubble Bursts — and it was meant to by mid 2014, just weeks after his forecast was made — Sydney house prices could collapse by up to 55%.

Now that didn’t happen did it?

Back in 2012 Dent was quoted in Forbes Magazine as saying “…the greatest housing bubble in developed-country cities starts with Brisbane, Australia…”

When I asked him on my Podcast what he had to say to those who sold up their homes based on his predictions his answer was: “Well I was wrong.”

He continued with much conviction to explain that while the timing was premature, his forecast is correct because he has no doubt that we are in a bubble.

So what is a property bubble? 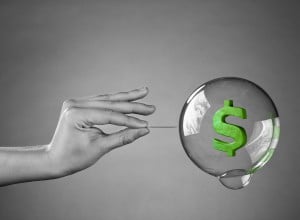 “A run-up in housing prices fuelled by demand, speculation and the belief that recent history is an infallible forecast of the future. Housing bubbles usually start with an increase in demand in the face of limited supply which takes a relatively long period of time to replenish and increase. Speculators enter the market, believing that profits can be made through short-term buying and selling. This further drives demand. At some point, demand decreases or stagnates at the same time supply increases, resulting in a sharp drop in prices - and the bubble bursts.”

For mine, bubbles are also accompanied by easing of lending criteria so that loans are easily obtained leading to rapid rises in housing credit, with many people who can’t really afford to take on loans speculating and overcommitting themselves.

Are we in a bubble? 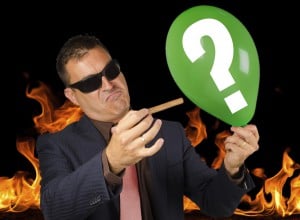 The simple answer is NO, and property values are not about to collapse!

Sure, house prices are high compared to many parts of the world, but rising prices per se don’t cause a bubble.

What is needed is for the rises to be fuelled by increased borrowings — leverage — which makes the banking system fragile and unstable.

Over the last few years our banks have tightened lending serviceability criteria ensuring that those taking out new loans could adequately service their debts.

Clearly our housing markets are set to cool this year, but while Dent thinks we’re in a bubble, the RBA and economists at all of Australia’s major bank, who have proved more accurate at predicting the swings and roundabouts of the Australian economy, believe our property market is not in bubble territory nor about to collapse. 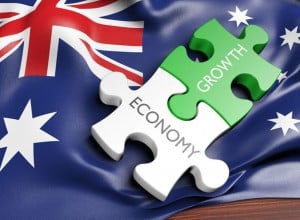 This is in part because of Australia’s strong economic and population growth underpinning our property markets.

When I chatted with Dent I explained to him that in Australia 70% of dwellings are owned by owner occupiers, and around half of them do not have a mortgage. And for those that do, many are ahead in their repayments.

I explained the Australia psyche: we don’t sell up our homes when things get tough — we’d rather eat dog food than sell up the “castle.”

Here’s why I think property values are not going to collapse:

Remember for a property market to crash, — and that’s different to price growth slowing or the normal cyclically correction - you need desperate sellers willing to give away their properties at fire sale prices and no one willing to buy them.

To make our property markets crash we need one or more of the following 4 things. 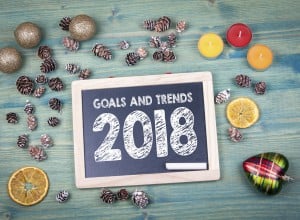 While our markets are slowing the value of well-located properties in our main capital cities are likely to be higher end the year than they are today.

While I’m acutely aware of some of the issues Dent has brought up – yes there are clearly economic and political issues overseas which could destabilise the world’s economies, here’s why I’m confident of the future of our capital city property markets:

1. Recently the International Monetary Fund has given an optimistic outlook expecting world economic growth to be 3.9% in both 2018 and 2019 — they can’t see a recession ahead. 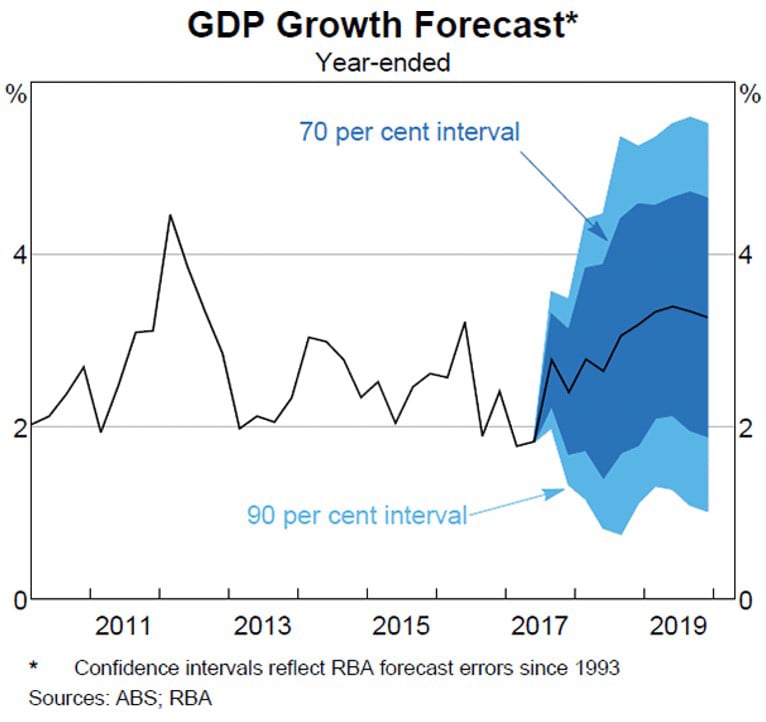 At present we’re creating more jobs than we have for a long time – and when people have jobs they don’t sell up their houses.

Only last month the Australian Bureau of Statistics noted:

3. Our banking system is sound, mortgage arrears are low.

Yes, some local investors took on too much debt and became speculators, taking out interest only loans with very small deposits, hoping (speculating) that capital growth would occur. 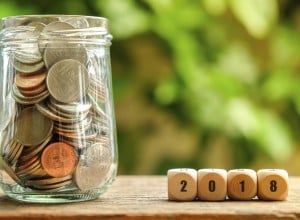 This worked out well for some who bought the right properties, but others who over paid for off the plan apartments or who bought properties in regional or mining towns learned that properties values don’t only go up as today’s hot spot can quickly become tomorrow’s not spot and property values fall.

But, in general, over the last few years lending to investors has been more responsible.

Anyone who borrowed in the last few years was “stress tested” — they could only borrow if they were mot be able to repay their interest if interest rates rose and if they paid principal and interest.

4. Our household wealth is the highest it ever has been and most household budgets are in good shape: 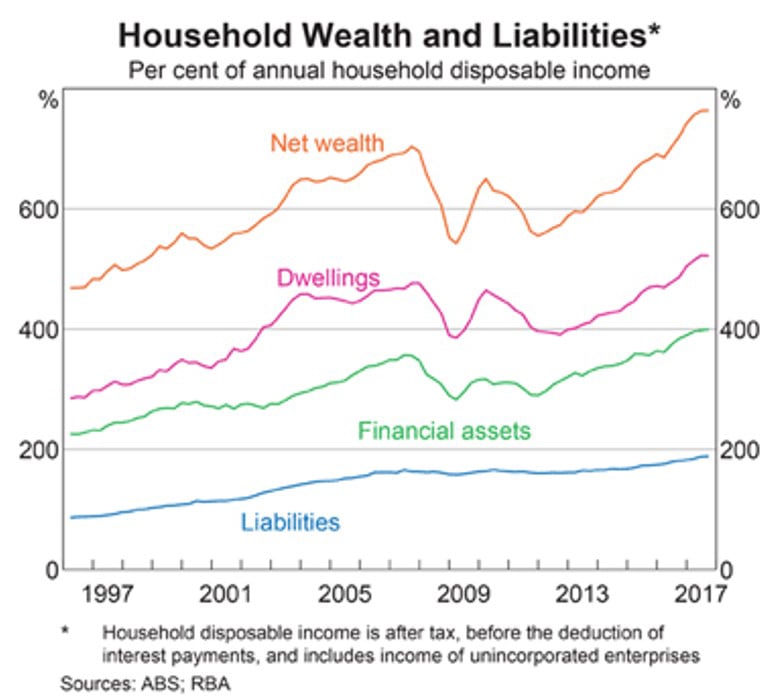 As you can see from the graph above, much of our household wealth comes from owning real estate, so the bubblers would argue that the level of debt against our proeprties is an issue.

On the other hand, CoreLogic estimates the total value of the Australian housing market at around $7.5 trillion, with the value of mortgages against these properties totalling $1.71 trillion.

That's a loan to value ratio of around 23% - now that's not bubble territory to me.

5. Inflation is contained, interest rates are low and likely to remain so for a while.

Low interest rates encourage homebuyers and investors into the property market while at the same time allowing current homeowners to pay off their mortgages quicker.

6. Our strong population growth (around 1.6% per annum — faster than any other developed country) underpins our economy and housing markets. 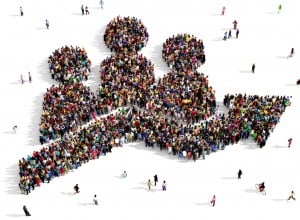 Interestingly most of these new Australians want to live in our 4 big capital cities and in many cases in many of the same suburbs.

And this won’t change in the near future. Australia has a “business plan” to growth 40 million residents in the next 3 decades.

This means we will be adding the equivalent of a city the size of Canberra each year for the next 30 years.

I took over 200 years to reach 25 million people, but now it will take only 3 decades to reach that milestone to 40 million.

While we’re experiencing natural population growth, we’re very lucky that we are a country where more people want to come to live than we allow in, and if the global economy fractures, living in Australia will become more attractive than ever.

7. Other than in a few specific markets (especially Brisbane high rise apartments) we do not have an oversupply of property.

Of course there is not one property market and as always some markets will perform better than others, but on the whole a mixture of low interest rates, strong population growth, job stability, affordability and increasing confidence will keep our property markets moving forward this year — albiet more slowly. 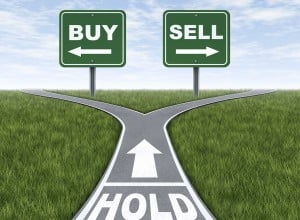 One more thing… as long as I’ve been investing in property, and that’s over 40 years now, there have been doomsayers and “chicken little’s” warning the sky is falling. And the media has lapped up their stories.

In the meantime, while smart investors and homebuyers were out buying the right type of property, others who were more cautious were sitting on the sidelines waiting to see how things pan out.

It is easy to do nothing … as Donald Trump once said: “Nothing is easy… but who wants nothing”.

By the way…I’ll be explaining what I think will be happening to our property markets at my National Property & Economic Market Update 1 day trainings in 4 capital cities in March and April.