Queensland leads Australia’s property pack with almost 51,500 properties settling through the first quarter of 2022 in the Sunshine State, narrowly ahead of Victoria

And Queensland leads Australia’s property pack with almost 51,500 properties settling through the first quarter of 2022 in the Sunshine State, narrowly ahead of Victoria, according to new sales data from property settlement platform PEXA  who reported that although the market showed signs of peaking, sale settlements remained at elevated levels

At first glance the market seemed to show signs of weakening, however, it is normal for settlement volumes to dip in the new year, as fewer properties settle in January due to the holiday period.

Settlements in the March 2022 quarter were comparable to the same period in the prior year, with volumes remaining at historically high levels, although growth flat-lined.

The relaxing of COVID restrictions breathed new life into capital cities, with metropolitan areas outperforming regional areas in NSW, VIC & QLD for the volume of sales growth in the March 2022 quarter.

Here is a summary of Pexa's Property Insight Report.

The runaway growth of 2021 was reigned in, with settlement volumes at similar levels to a year ago

The Queensland housing market once again recorded the most sale settlements of any state at over 51,000, closely followed by Victoria. 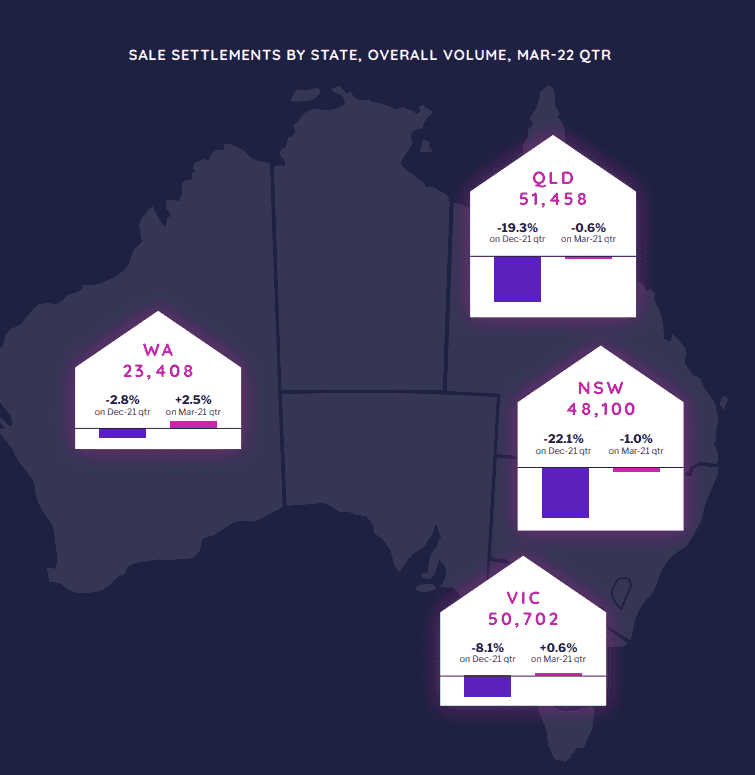 West Australia re-opened its borders with the Eastern states in March 2022 and recorded the highest year on year growth of all states, up 2.5% compared to the March 2021 quarter.

The state also only dipped slightly from the highs of the December 2021 quarter (down 2.8%), even with the January holiday period factored in.

The number of property transactions in all states were up at least 20%, driven by increases in property prices throughout 2021. 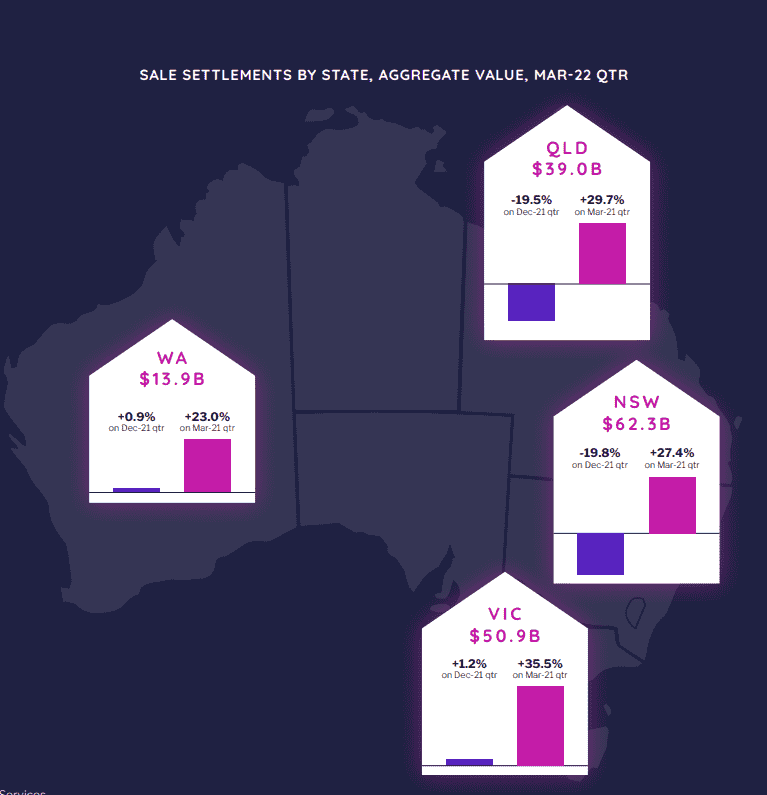 It is normal for aggregate values to dip in the March quarter, as few properties settle in January due to the holiday period.

This explains the declines observed in QLD and NSW compared to the December 2021 quarter.

NSW continued to lead in terms of absolute value, recording $62.3Billion of settled sales in the March 2022 quarter.

Victorian experienced the highest growth, up 35.5% over the prior year.

Although volume growth stalled in March 2022, levels were well ahead of those recorded in 2020 and 2019

The aggregate value of property sale settlements on the other hand continued to rise rapidly.

Compared to 2021, the March 2022 quarter volumes were flat, however, these volumes remained significantly higher than in the preceding years. 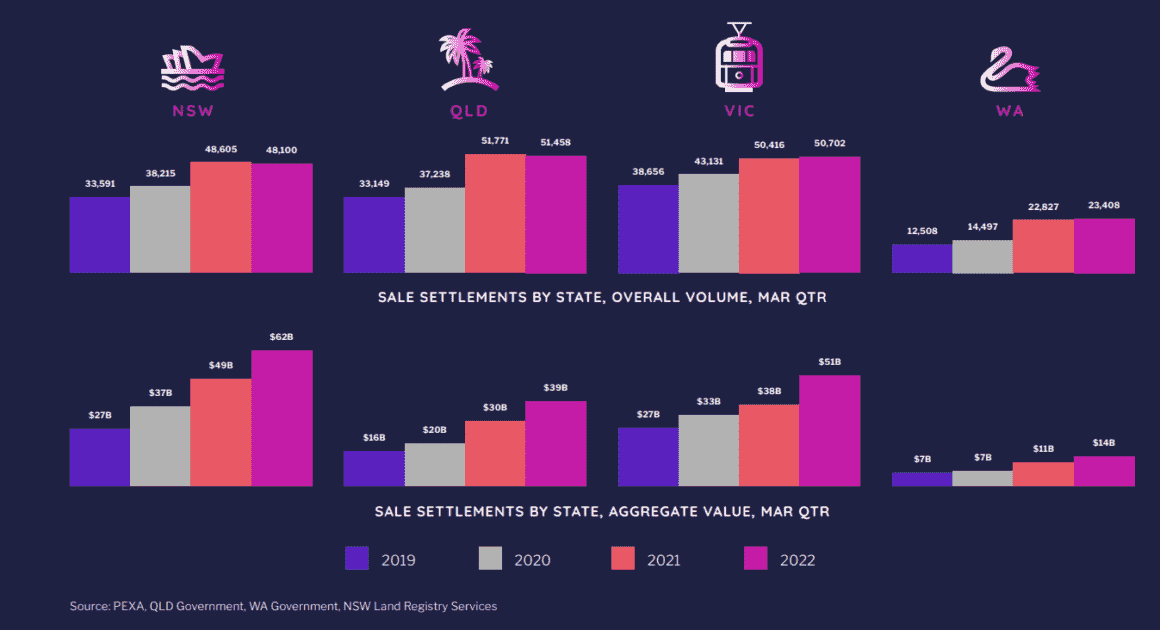 This was particularly so in Victoria.

The greater Melbourne area was up 7% year on year, with regional areas down 12% over the corresponding period. 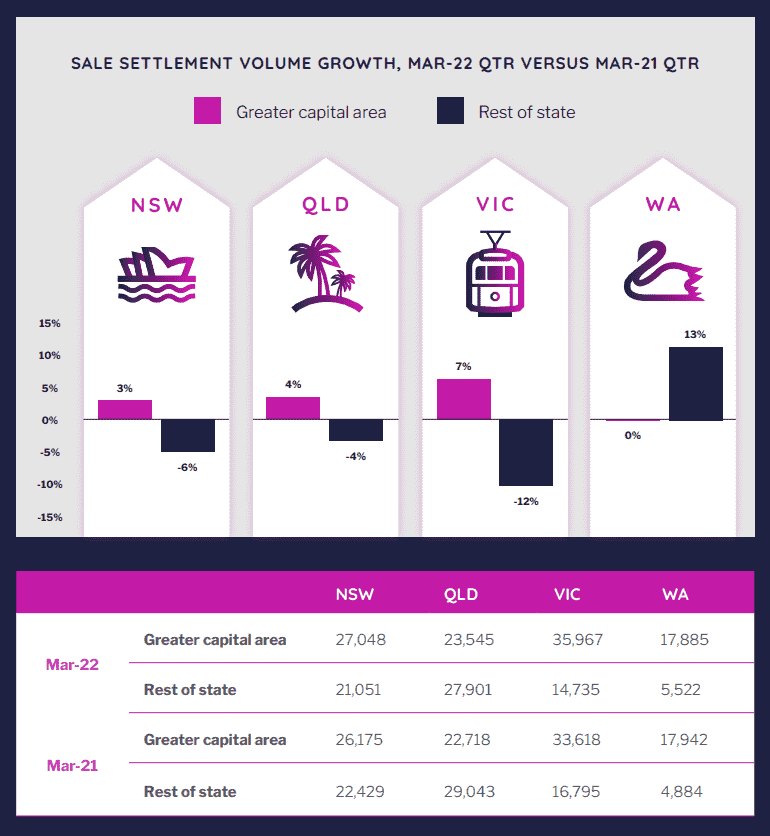 West Australia bucked the trend with regional areas up 13% year on year, whilst greater Perth was stagnant.

It should be noted that regional West Australia grew off a smaller base.

Postcode 3029 (Truganina in Victoria) topped the country, followed by 3977 Cranbourne (Vic) with 6210 (Mandurah in WA) coming in third. 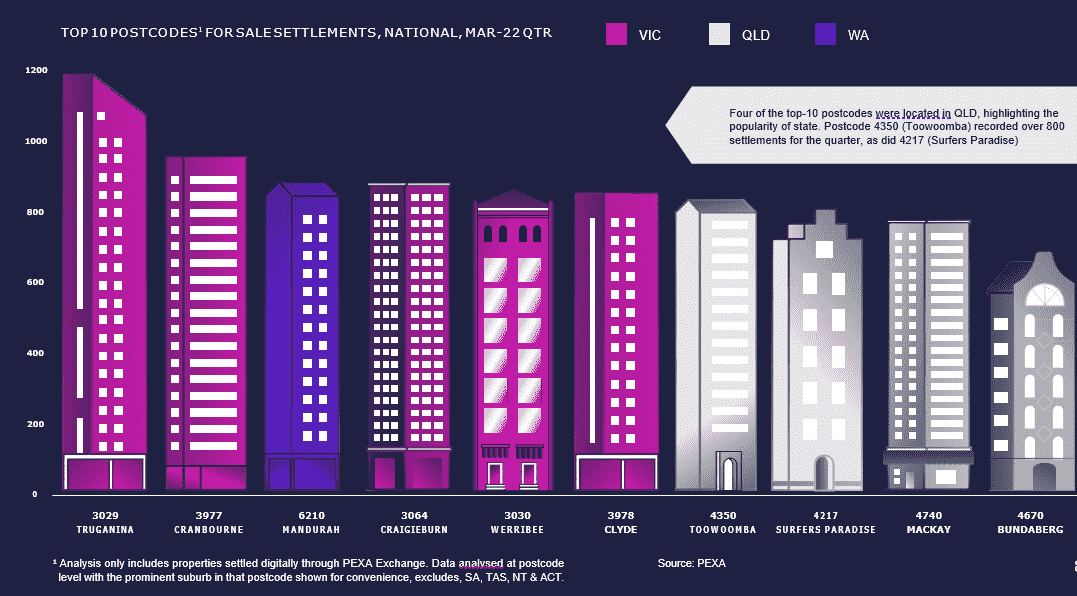 2022 started in a similar fashion to the prior year.

All states experienced seasonal declines in sales volumes in January followed by a strong rebound in property sales in March.

But it's now the third consecutive quarter more properties have settled in Queensland than any other state, a trend PEXA’s head of research, Mike Gill, said was unprecedented and aligns with near 20-year high levels of interstate migration to the state. 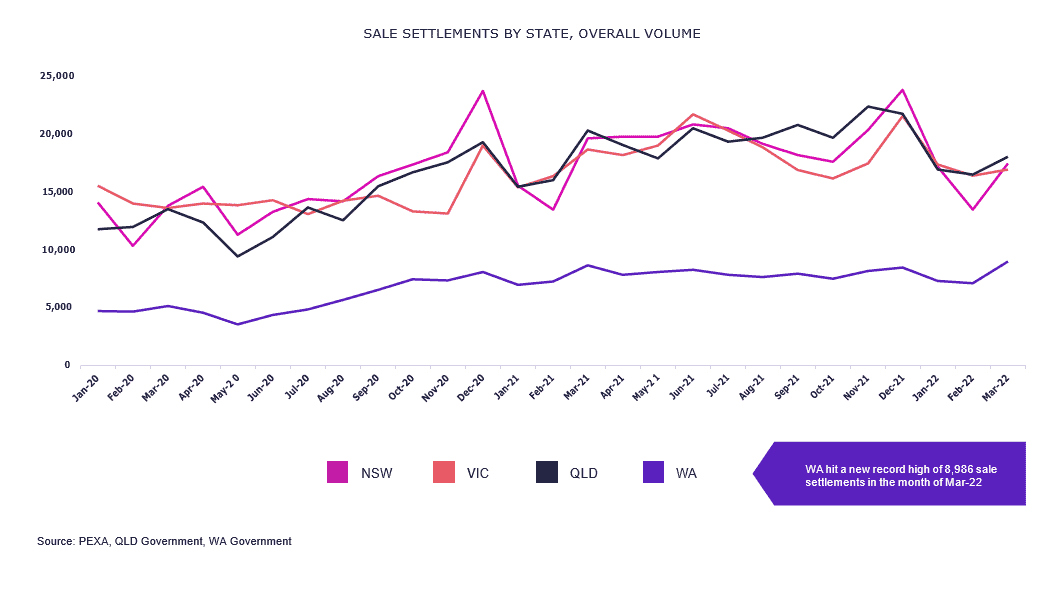 After 2 successive months of decline, New South Wales bounced back strongly with 15,010 residential settlements in March 2022.

Both metro and regional New South Wales saw an increase in March 2022.

The PEXA data shows that five out of the top six best-selling Australian postcodes were in the outer suburbs of Melbourne.

In Victoria 50,700 residential and commercial properties settled in the three months to March 31.

Although still elevated, residential settlements in Victoria declined over the March 2022 quarter.

Commercial settlements increased over that period, recovering from a weak January.

Both metro and regional Queensland experienced a similar uplift in March 2022.

West Australia recorded a strong March 2022, exceeding the volumes posted the prior year.

Property sale values in WA for the period increased 23 per cent over the previous year to reach $14 billion.

This result was driven by a large uplift in March 2022 in Perth.

After peaking in December 2021, the aggregate value of sale settlements dropped in January and February, before recovering in March 2022.

This trend was experienced across all states.