The auction markets around Australia had the busiest start to the year on record.

The momentum from last year’s record high auction volumes has continued into 2022 with the Australian residential auction market achieving its busiest first quarter on record.

The latest data shows 23,748 homes went under the hammer in the first three months of 2022, making it the busiest March quarter since records began in 2008, based on CoreLogic’s Quarterly Auction Market Review.

During the three months to December 2021, 42,918 homes went to auction, setting a new benchmark and carrying through to an earlier than usual pick up in this year’s auction volumes.

However, the combined capital city clearance rate of 69.9% for the March 2022 quarter was down from the December result of 71.3% and weaker again when compared to the corresponding quarter in 2021 when the clearance rate was 80.0%.

While the number of auctions held reached a March quarter high, the clearance rate gradually drifted lower through the quarter.

However, higher overall listing numbers and a slowing rate of sale in Sydney and Melbourne were also impacting market conditions. 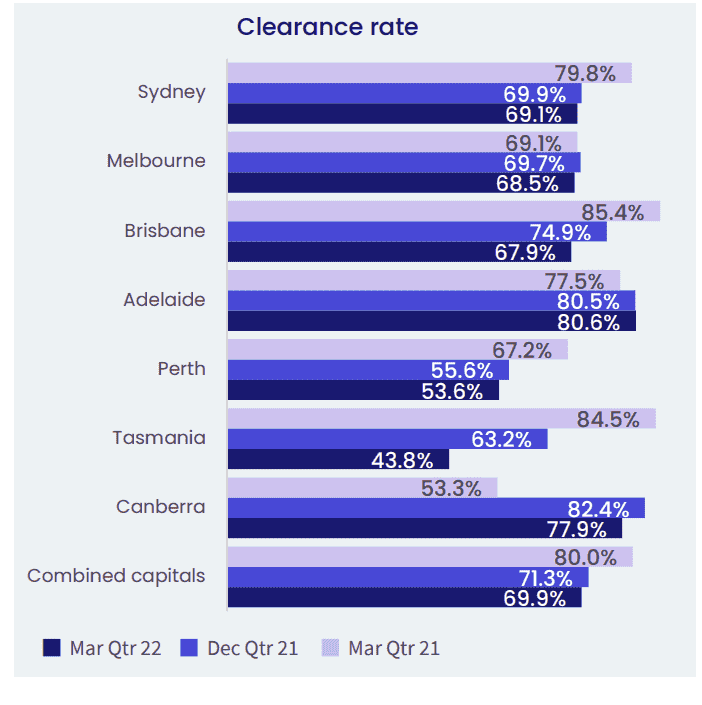 In terms of auction volume, there were 10,315 homes taken to auction across the city over the March quarter.

Of the smaller capital city markets, Adelaide was the top performer with a clearance rate of 80.6% for the March quarter from 1,797 auctions.

The smaller auction markets were generally stronger through the quarter, especially Adelaide where clearance rates held above the 80% mark. 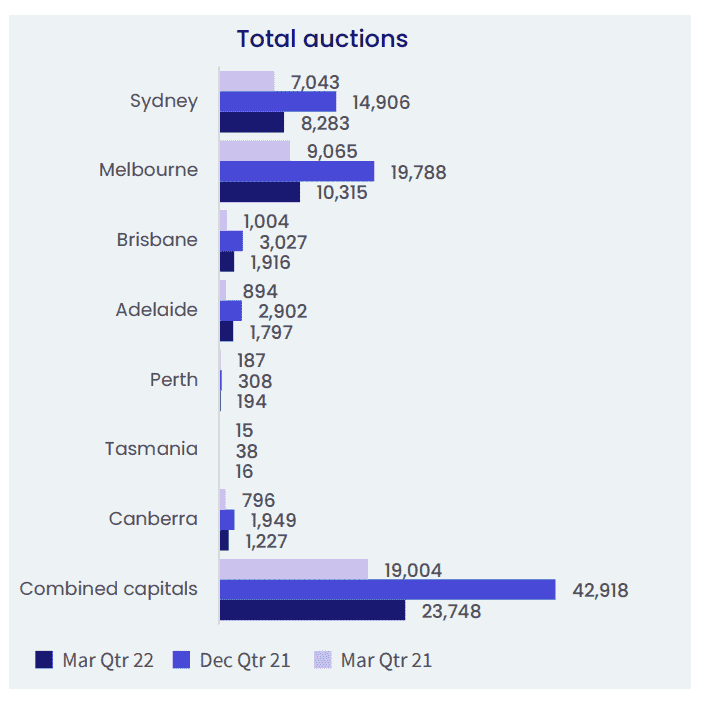 With such strong selling conditions, we’ve seen a progressively larger portion of homes being taken to auction in Adelaide; a city that has historically favoured sales campaigns by private treaty rather than auctions.

Easter is traditionally one of the quietest auction periods of the year and generally marks the start of the winter selling season.

Although this year’s Easter week was the busiest on record with 937 homes taken to auction across the combined capital cities, I predict the trend will be for fewer auctions in the coming months.

This is a seasonal trend we see through the winter months, but as selling conditions gradually swing towards a buyer’s market, we could also see clearance rates trending lower.

Sydney saw the volume of auctions increase across all but one of the 15 sub-regions over the March 2022 quarter, compared to the March 2021 quarter. 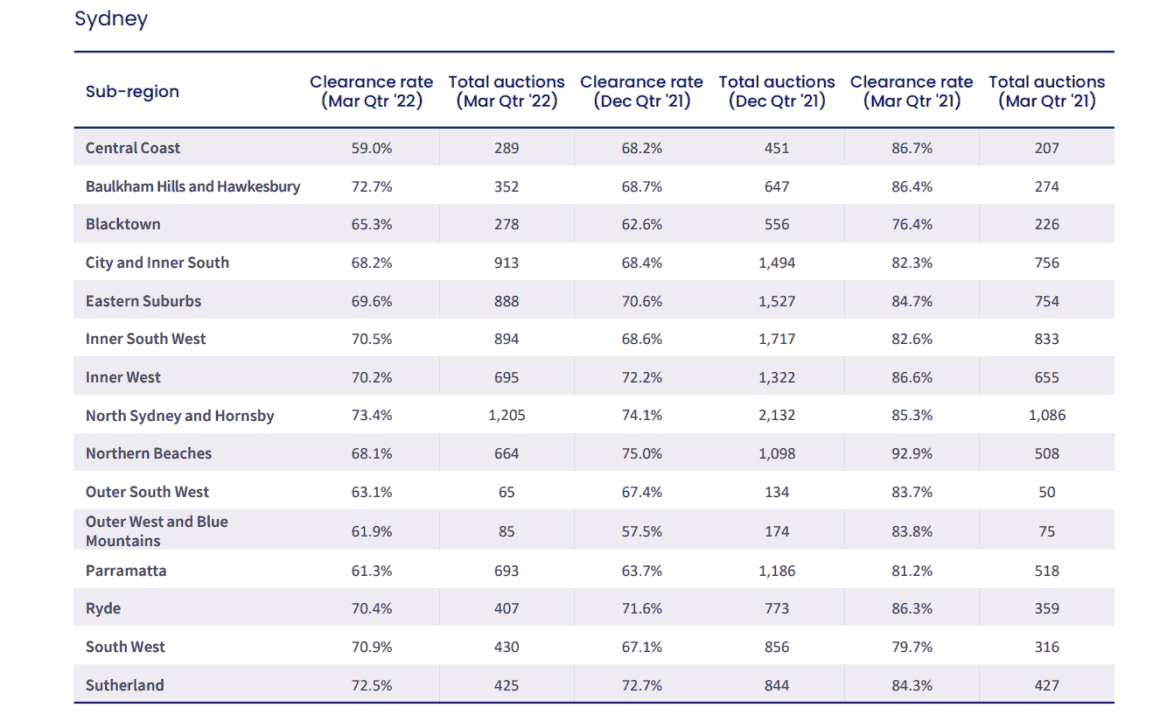 However, the higher volume resulted in lower clearance rates. 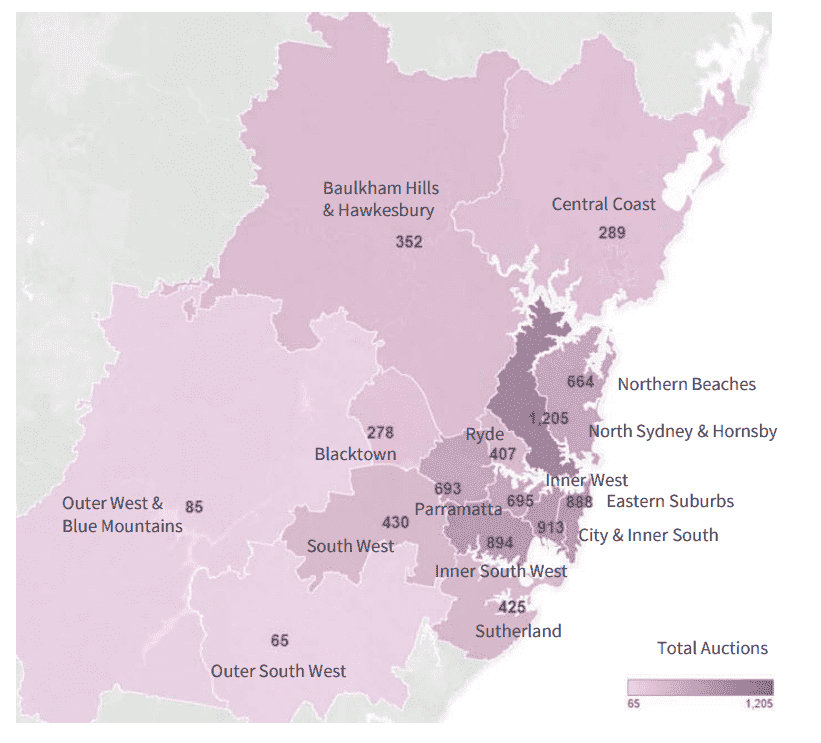 North Sydney and Hornsby recorded the highest clearance rates this quarter (73.4%), followed by Baulkham Hills and Hawkesbury (72.7%) and Sutherland (72.5%).

In Melbourne, the Inner region was the busiest spot for auctions with 2,049 auctions held over the quarter, up from 1,987 over the March 2021 quarter.

All nine of Melbourne’s sub-regions recorded a fall in clearance rates over the quarter compared to the same quarter last year. 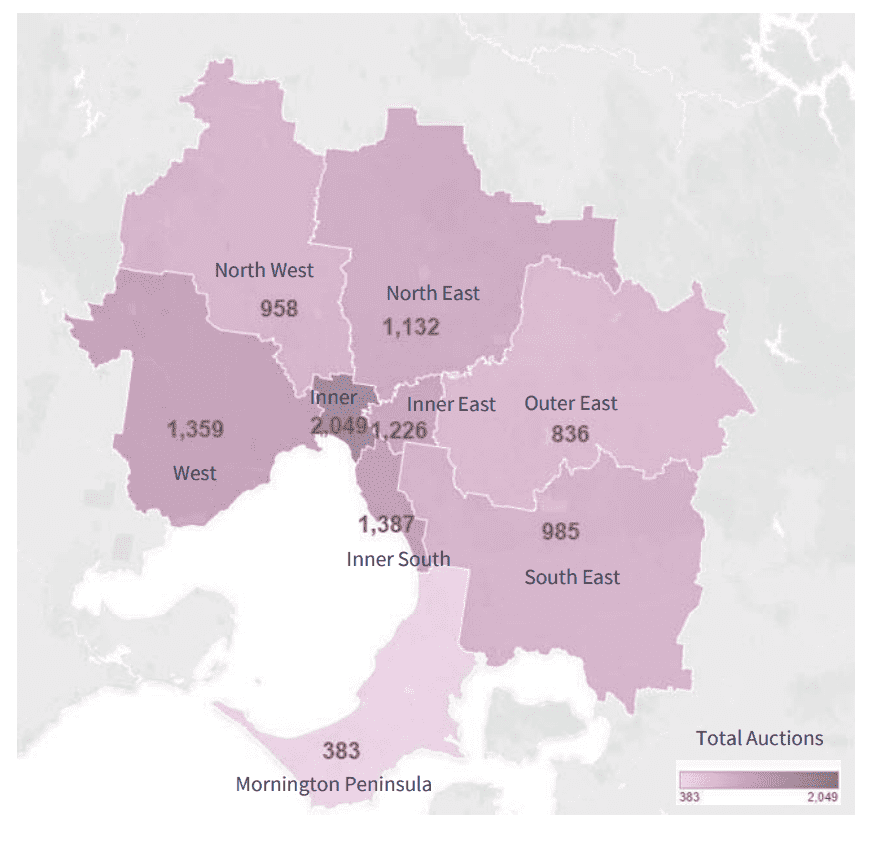 Based on the total auctions held across suburbs during the March quarter, Reservoir in Melbourne was the country’s busiest with 168 auctions followed by Randwick in Sydney’s Eastern Suburbs with 123.

West End in Brisbane (40), Ngunnawal in Canberra (35), Magill in Adelaide (30) and Dianella in Perth (8) had the highest volume of auctions in their respective capital cities.

All 21 homes auctioned in Carlton in Melbourne’s inner north sold under the hammer in the March quarter for a 100% clearance rate, the best performer in the country.

Cammeray in Sydney recorded a 90.9% clearance rate from 22 auctions, slightly higher than Casey in Canberra where 29 of the 32 auctions (90.6%) sold under the hammer in the first quarter.