Over the month of March, growth in houses prices was 0.5% across the combined capital cities, outperforming the growth in the value of apartments (0.3%)

While national houses are still recording stronger value growth compared to units, houses have also recorded a faster deceleration in the pace of quarterly growth.

Brisbane continues to stand out amongst the capital city markets.

Over the month of March, growth in houses was 0.5% across the combined capital cities, outperforming the growth in the value of apartments.

This continues the annual trend where houses grew 22.9% over the last 12 months while apartments only grew in value by 13.2%.

At the national level, units recorded a 0.3% rise in values over March, in line with the growth rates recorded in January and February, resulting in a first-quarter appreciation of 0.9%.

This is equivalent to a $5,464 increase in median unit values through the quarter.

National house values rose 0.8% in March and 2.8% over the three months to March, thanks in part to strong growth in QLD and SA.

The rise in house values through the quarter was equivalent to a rise of $21,690 in median values. 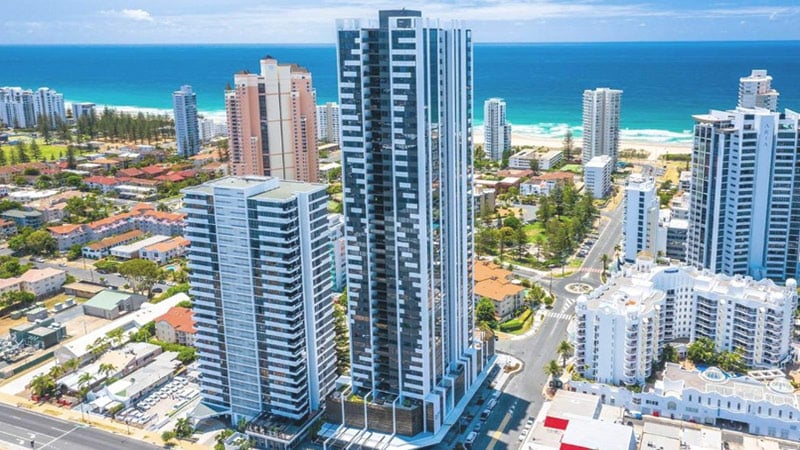 While national houses are still recording stronger value growth compared to units, houses have also recorded a faster deceleration in the pace of quarterly growth.

Similarly, the slowdown in values can be seen in the annual growth trend shown in Figure 1, with both houses and units moving into a downswing trend after recording cyclical peaks in January.

Coming off the back of strong annual growth, affordability continues to be a key factor affecting market conditions.

Amid higher inflation and the rising cost of living, prospective buyers are finding it harder to save for a deposit, while the amount required for a deposit has also increased.

As noted in previous CoreLogic research, increasing investment in higher density dwellings has a significant role to play in alleviating affordability concerns, because higher density housing is generally more affordable.

Additionally, increased housing density across key transport lines can help maximise the efficiency and use of infrastructure. 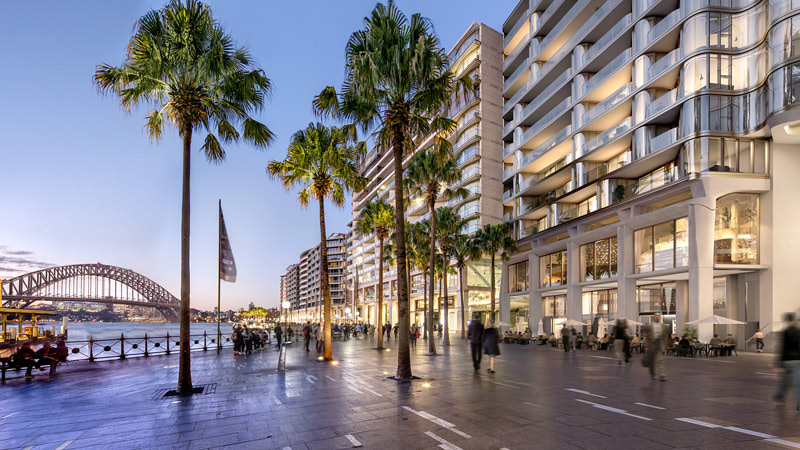 Over the month of March, growth in houses was 0.5% across the combined capital cities, outperforming units (which were steady over the month).

However, combined regional house and unit values both recorded a monthly appreciation of 1.7%.

While capital city unit values remained flat over the month, the lower quartile of unit values recorded a modest rise of 0.9%, while the middle and upper segments recorded value changes of 0.2% and -0.5% respectively.

Historically, the upper quartile value trend has been more volatile with higher peaks and deeper troughs.

Over the three months the March, upper quartile unit values fell by -0.7%, while the middle and lower quartiles both recorded positive quarterly growth (0.5% and 2.4% respectively).

A similar trend can be seen across the individual capital cities

Unit values are beginning to record quarterly declines across the more expensive cities of Sydney (-0.6%) and Melbourne (- 0.2%), while relatively cheap cities like Brisbane and Adelaide are still recording quarterly growth above 4%.

With a median value of $833,815, the typical Sydney unit is approximately $355,000 more than the typical Brisbane unit, and more than double the price of the average Adelaide unit.

At the suburb level, 51.4% of Sydney's unit markets analysed in CoreLogic’s Mapping the Market Report recorded a decline in values over the first quarter, with a number of the largest falls recorded in the city's Northern Beaches region.

Across Melbourne, 58.0% of the unit markets analysed recorded a decline in values, with the largest value declines recorded across the inner-city markets. 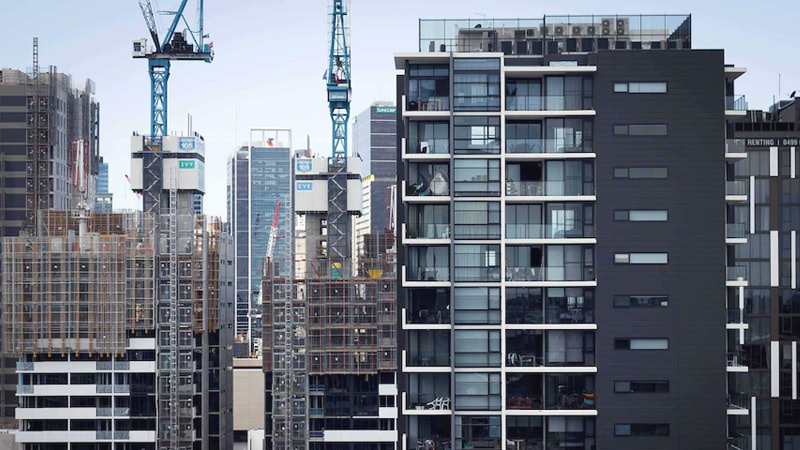 The typical Brisbane unit recorded a $63,000 rise in values over the past 12 months.

Just one Brisbane suburb recorded a fall in unit values over the first quarter of the year.

While Adelaide units continue to record strong monthly growth rates, quarterly growth appears to be slowing, with the pace of quarterly growth decreasing from 4.4% in January to 4.2% over the three months to March.

Perth has recorded a surprise reversal in its quarterly growth trend, with the reopening of the WA border potentially pushing unit values 0.7% higher over the three months to March.

While quarterly growth has remained positive across Hobart, Darwin, and Canberra, the pace of growth continued to ease over March.

Each of the ‘rest of state’ markets recorded positive unit value growth over the quarter.

At the other end of the spectrum, regional SA units recorded the smallest increase in values, rising just 0.5% over the quarter, while regional Tasmanian unit values rose by 1.7%.

While monthly unit and house growth were on par at the combined regionals level, four of the six ‘rest of state’ regions recorded stronger unit growth than houses. 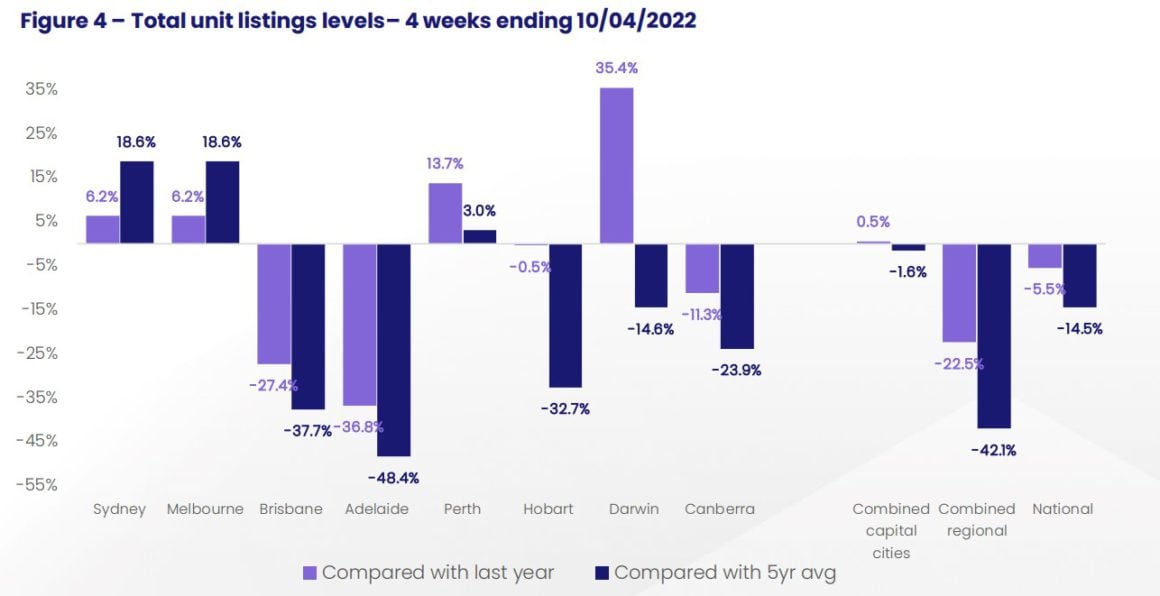 Along with affordability, variations in total advertised unit supply continue to be an important factor influencing deviating growth trends.

Over the four weeks to the 10th of April, national unit listings were -5.5% below the stock levels recorded this time last year and -14.5% below the previous five-year average.

While still low, total listing levels have started to normalise compared to the volumes recorded in January, (-11.5% and -20.4%). 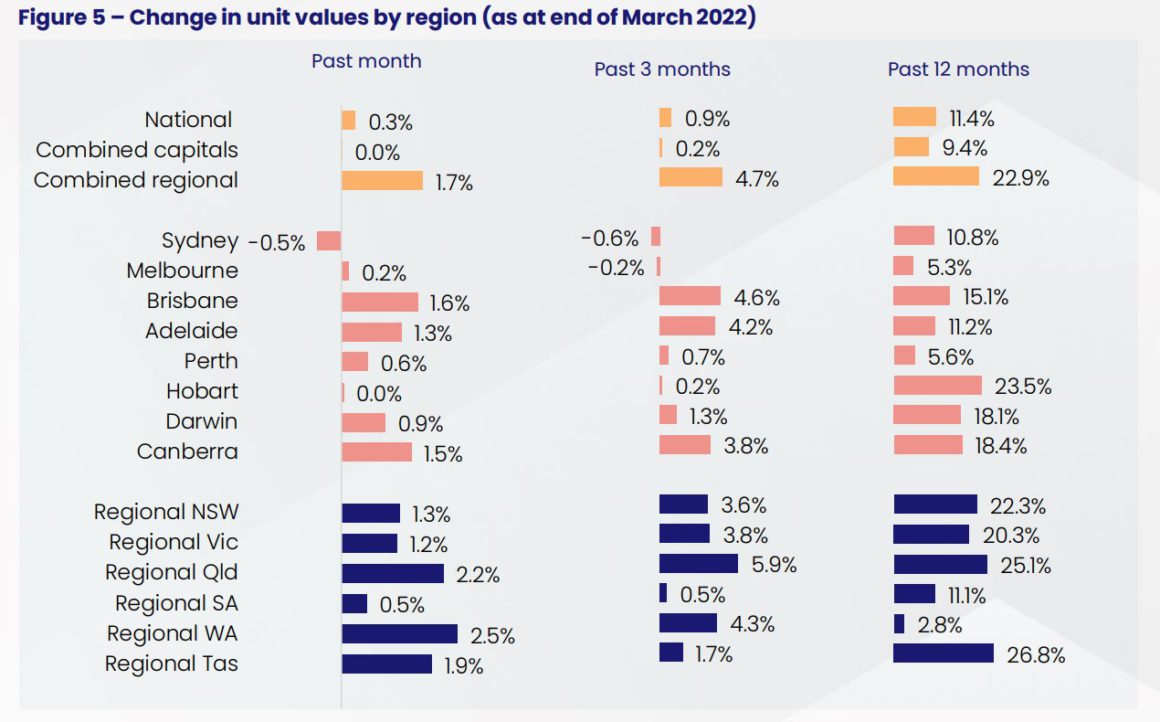 As the pace of value growth continues to slow, rental growth is surging

Continuing the trend seen throughout the first quarter of the year, national unit rents recorded a higher monthly rental rise (1.1%) compared to houses (1.0%), resulting in quarterly rental growth of 3.0% and 2.4% respectively.

A similar trend can also be seen across the combined capitals, with capital city units rising 3.1% over the first quarter, compared to a 2.2% rise in house rents.

This is with the exception of Darwin and regional SA which recorded a -0.6% and -0.3% rental reduction. 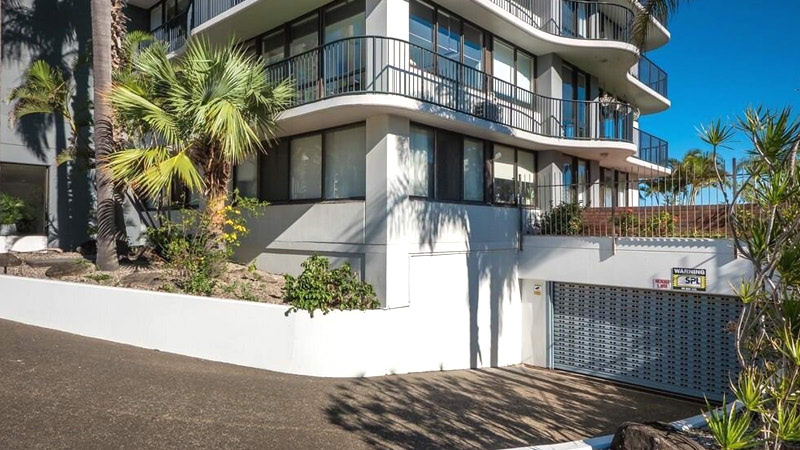 Hobart and Regional Queensland led the pace of unit rent growth, both recording a rent rise of 1.6%, followed by Melbourne (1.3%) and Adelaide (1.3%).

Despite recording the strongest rental growth over the first quarter, Melbourne unit rents are still -1.9% below their pre-COVID levels.

Amongst the capitals, Sydney recorded the strongest annual growth rate (8.3%) over the 12 months to March, after a peak to trough fall of 7.2% in the first half of the pandemic.

With rent growth continuing to outpace value appreciation, national gross rental yields for units (3.74%) rose for the third consecutive month, up 8 basis points since bottoming out in December (3.66%).

Despite the recent rise, national unit yields are still 20 basis points below the yields recorded this time last year (3.74%). 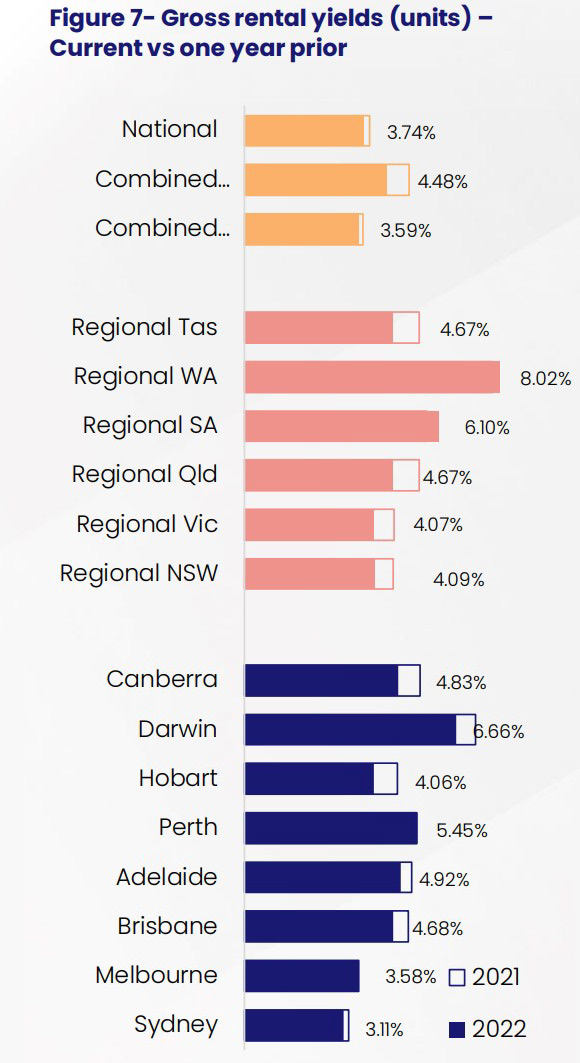 Looking forward, appreciation of property values is seeing more headwinds than tailwinds, though the unit segment may be more resilient relative to houses as the Australian property market inches toward the downswing phase of the cycle.

Housing affordability constraints, rising mortgage rates, and the possibility of a lift in the cash rate over the next few months could see less buyer demand throughout the year.

However, unit capital growth cycles have historically seen less volatility than houses, and as a result, the downswing in prices is expected to be less than that in the detached house segment.

Unit stock is also generally more affordable relative to detached houses in the same area, and a downturn in demand may be partially offset by the fact that units are a more viable option amid housing affordability constraints. 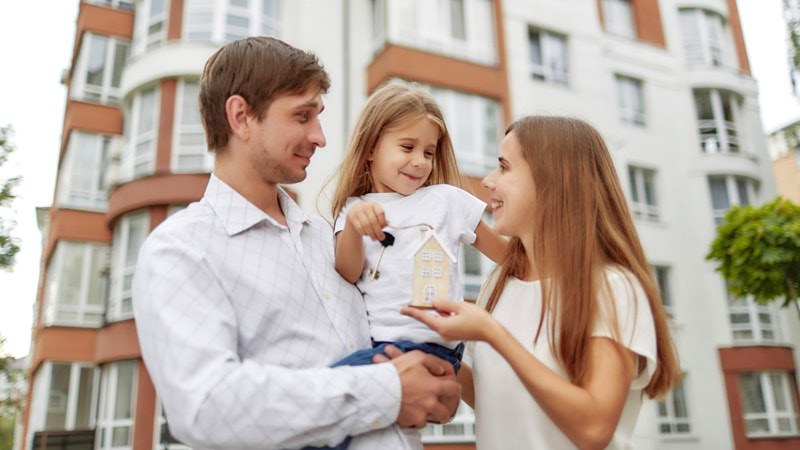 Finally, it is clear that the investment proposition for units is becoming slightly more favourable in terms of rental return.

Gross rental yields seem to have bottomed out in some cities and are now rising.

This may at least in part be due to relaxed restrictions around international travel earlier this year, where overseas arrivals tend to be renters, and tend to be concentrated in densely populated parts of cities. 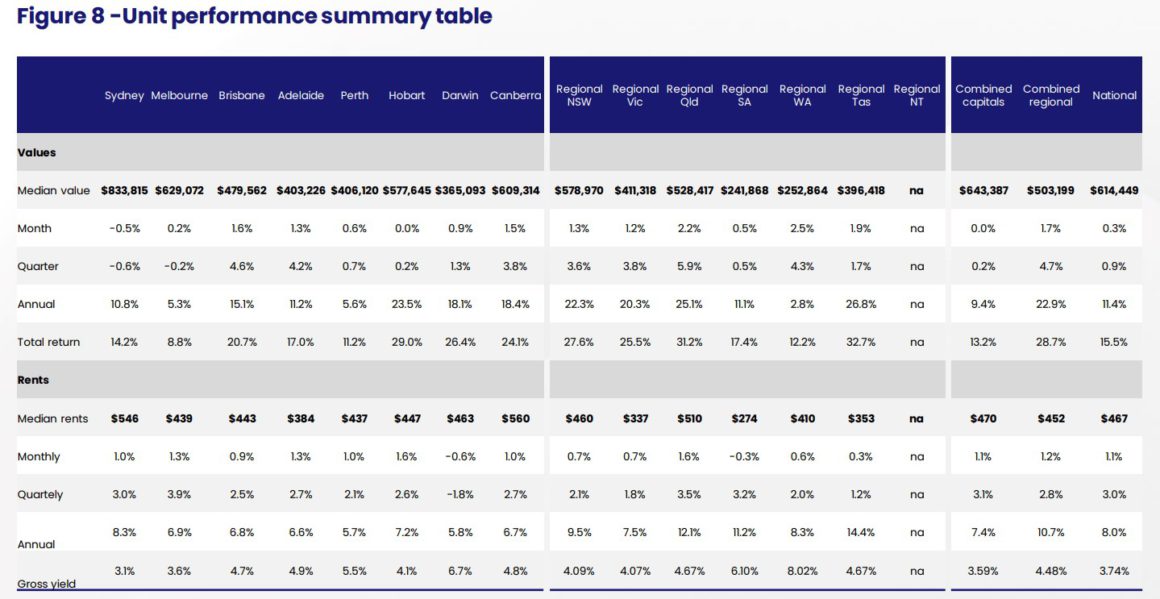