While it’s sometimes the case that money can make people with “challenging” behaviours even more so, generally speaking having enough money for the basic necessities of life as well as your wants and needs usually means a happier life.

Now I’m not saying that money will solve all your problems, but any problem money can solve isn’t really a problem when you have money.

While there’s plenty of research out there on whether money does indeed buy happiness, there is evidence on both sides of the equation.

The secret is, though, it seems that true happiness can also come from deep personal connections and life experiences rather than material goods.

But there’s also information showing that people on the lowest end of the income scale are vulnerable to depression and other mental health problems.

So, here’s a look at some of the research indicating that money does indeed play a role in making people happier.

1. Your children’s brains will benefit

There’s a growing body of evidence supporting the idea that growing up in poverty can have a long-term impact on children’s cognitive development.

In the most extreme cases, children who have to endure something called “toxic stress” are shown to actually have chemically altered their brains.

A 2012 report from Gallup revealed that people in poverty are more likely to suffer from health problems, with depression being the most common.

About 31 per cent of poor people said they have been diagnosed with depression at some point, compared to about 15.8 per cent (half as many!) for those not in poverty.

3. You can savour life 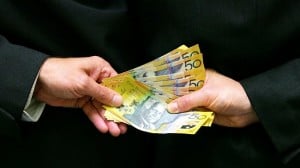 When you have money, you don’t need to focus as much attention on acquiring it in order to meet your basic needs.

This frees up your mind to actually savour the experiences of life, according to a 2010 article in Scientific American.

The article concluded that “a person’s ability to savour experiences predicts their degree of happiness.”

Also, birds of a feather flock together, so many happy people associate with other happy people.

But paying for experiences offers a good bang for your buck when it comes to happiness, according to the book Stumbling on Happiness.

Whether it’s swimming with dolphins off the coast of Western Australia or hang-gliding on the Sunshine Coast, experiences do cost money.

5. You can spend money on others

When you barely have enough to support yourself, you’re probably not thinking about giving back to others.

But being generous with your money is a path to happiness, according to the Harvard study Using Money to Benefit Others Pays Off.

In the study, researchers gave money to students to spend on either themselves or others by the end of the day.

6. You’re less likely to be lonely

A 2011 study in the Journal of Consumer Psychology concluded that people with meaningful social connections are generally happiest.

And there is other evidence showing that people with less money are more likely to be lonely.

The Guardian reported in 2014 that “poor social networks should be included as a contributor to and signal of poverty.”

ALSO READ: 10 pointers on gifting money to your children

'6 Reasons Why Money Can Buy Happiness' have no comments