When can we expect the property market to improve?

2018 was a tumultuous year for the property market, with more turmoil on the horizon, so when can we expect to see improvements?

Don’t expect to see any green shoots until at least the second half, but more likely the end, of 2020.

There’s a lot going on in the property market at the moment, a rare combination of major events, a lot of uncertainty and a bit of confusion, and this is causing continued price reductions and falls in consumer sentiment.

This year we won’t expect to see any improvement, especially with the final report from the Royal Commission and the federal election looming.

The political uncertainty is making people hold off making any property decisions.

And given the general consensus in the polls is that Labor will be elected into office, it means their proposed changes to negative gearing and capital gains tax are likely to be implemented, although probably not until the 2020 Budget.

The ALP has proposed limiting negative gearing to new housing and reducing the discount on capital gains tax from the current 50 per cent to 25 per cent.

Many investors, wanting to minimise their risks, were holding off making any property decisions until the outcome of the elections were finalised, and this was having the effect of dampening the market.

The second half of 2017 saw the major risks associated with the residential property market increase significantly due to tighter lending standards, the results of the Royal Commission, the fear of the potential changes to negative gearing and capital gains tax, political uncertainty, and unit oversupply in conjunction with a sharp drop in dwelling commencements.

This continued throughout 2018. In fact, price reductions accelerated over the last quarter following the day of the Liberal leadership spill of Malcom Turnbull by Scott Morrison on August 24.

And we don’t expect to see much improvement in 2019 and, at this stage 2020 is not looking promising either.

It won’t be until after Labor has made the changes to negative gearing and capital gains tax, and that, together with other things, particularly lending restrictions, have settled down, reaching a new equilibrium, that we hope to see some upwards movement in the market.

It will be a case of waiting out the continuous price reductions that will occur once the changes are made.

Investors will have to wait for the dust to settle and for the price reductions to stop or decelerate significantly, and only then to start looking around to invest.

The question is how long will this take? We believe, realistically, this might not happen until some time in the second half and towards the end of 2020. 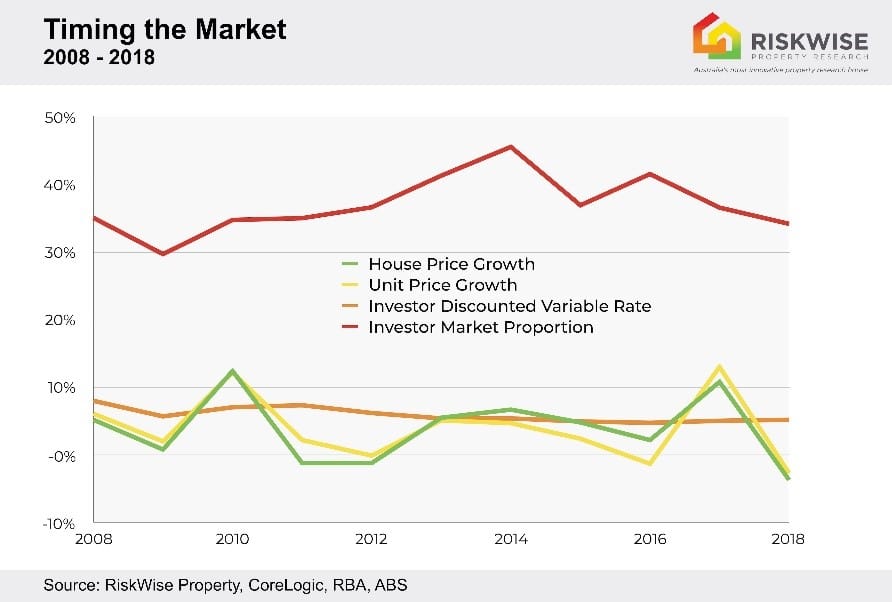 The implementation of the changes to negative gearing and capital gains tax would increase the out-of-pocket expenses for investors and this would be the equivalent to a significant interest rate increase.

RiskWise’s Risks & Opportunities Report in June this year assessed that the changes would equate to a sudden 1.15 per cent interest rate increase for investors in the Sydney unit market.

It is absolutely proven that a capital growth strategy is significantly superior than a cash flow one and investors simply need to wait to get the best prices they can after the implementation of the changes.

If investors buy prior to the changes their asset will depreciate as a result of the creation of primary and secondary markets.

For investors who look for capital growth, an investment strategy without any reliance on the current taxation benefits is preferred.

Especially as, if there is a need to refinance or an unexpected need to sell, this is highly likely to result in a loss.

To minimise the risk, they need to time the market.

There hadn’t been any similar event which, in a single shot, made major increases to out-of-pocket expenses since the previous changes to negative gearing in the 1980s.

It is also very unusual to make such changes to out-of-pocket expenses in the current market environment where there is combination of credit restrictions, the Banking Royal Commission results, limitations on borrowing against self-managed super funds (SMSF), restrictions on lending by foreign investors, a large supply of units and overall a very weak property market in a red zone territory for auction results … it’s simply not happened before.

It is described as an ‘extremely unusual’ set of circumstances which meant investors could enter the market at just the right time to minimise their risk and get better capital growth.

What property investors who want to minimise the risk need to do is, firstly, wait for the results of the federal election, secondly, wait for a formal announcement on the implementation of changes to negative gearing and capital gains tax given the odds are in favour of Labor winning and, thirdly, wait until these changes are fully implemented, which will probably be in 2020.

Then it is just a matter of waiting out the continuous price reductions that will occur due to their implementation and only then to start looking around to invest.

There were still a small number of areas that offered good capital growth, particularly in south-east Queensland and regional Victoria, however, with the continued weakness in the property market their numbers were shrinking.