Wages growth has predictably increased over the December quarter as the national labour market recovered from the impact of severe mid-year covid restrictions.

The ABS national Wage Index seasonally adjusted rose by 0.7% over the December quarter for an annual growth rate of 2.3%.

This was marginally higher than the September quarter increase of 0.6% and annual growth rate of 2.2%.

Although the December result was the highest quarterly increase since March 2014, a sustained spike in wages remains problematic.

Unemployment rates are at near-record lows, however a surge in labour supply can be expected as the economy continues to normalise through a post-covid recovery. 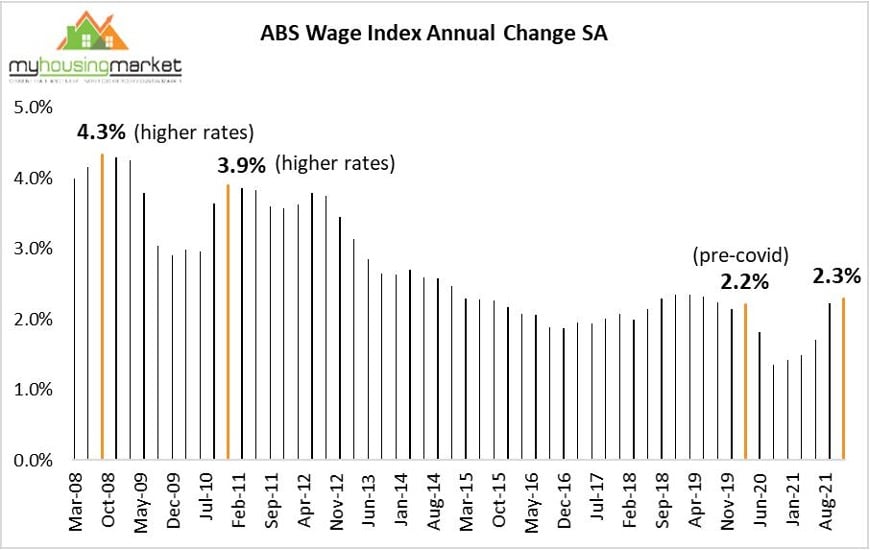 Worker participation rates in NSW and VIC remain well below last year’s peaks but workers will quickly return to the labour market as restrictions ease and health outcomes improve.

Growth in the national workforce has stagnated over the past two years as a result of closed borders, but mass migration is set to recommence almost immediately which will add significantly to the supply of labour – with increased competition for jobs.

Despite the recent covid-related spike in inflation, the RBA has consistently stipulated that any action to raise official rates is dependent - as usual, on sustained annual wages growth above its 3% target.

The latest wages data and a likely surge in workers continues to indicate that reaching that benchmark will be next year - at the very earliest.