It is a sad fact that apart from the impact of the virus itself, the ever more restrictive controls on our movement and assembly designed to slow down its spread are also having a tragic side effect on employment, business and the economy generally.

The main problem with making any forecasts is that the landscape is changing so quickly that a correct prediction now may turn out to be completely wrong in three months.

Even so, here are some facts I can share with you:

The number of potential property buyers is likely to fall

Sales will fall in coming months because people are losing their jobs, businesses are suffering and the capacity of many potential home buyers to obtain housing finance is being eroded.

In addition, even those of us who are not directly affected will delay making major decisions, such as moving house or buying an investment property until the crisis has passed.

Some experts believe that this will result in falling prices and soon there may even be talk of a possible property market crash, but while it is certain that fewer people will buy a home or investment property in the coming months, we need to measure both sides of the equation to get a true perspective.

The number of property listings is also likely to fall

The first effect of a fall in buyer numbers is that fewer properties are sold.

In addition to this, the ban on public auctions and open house inspections will encourage some owners to put off listing their home or investment property for sale in the belief that these bans, plus the dangers of viral contamination will deter all but the most enthusiastic buyers.

The balance between supply and demand is not going to change

The most probable outlook is that any reduction in buyer numbers will be accompanied by a drop in the number of properties listed for sale, so that both demand and supply fall together. In fact, the balance between them may not change significantly, as the graph shows. 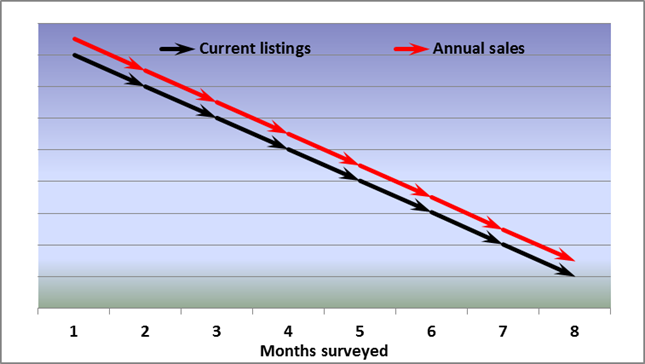 At the worst this trend could lead to a small fall in sale prices and at best, it could see prices rising slightly.

Either way it will take many months to become apparent because properties are listed for months before they are sold, and it then takes several more months before the sales data is published.

Ignore the scaremongers who predict a housing market crash

Many experts are comparing the current situation to previous economic crises such as the Global Financial Crisis, the early nineties recession and even to the worst one of all, the Great Depression, when wages and salaries fell from 1930 onwards and unemployment rose to twenty per cent, remaining above ten per cent of the workforce for five years.

Australia’s population kept increasing all through those economically depressed years, but new households had to become renters as housing finance was impossible to obtain. This pushed rents up to fifty per cent of household incomes, while house prices slowly fell, as the graph shows.

The worst year for house values was 1931, when they tumbled by eighteen per cent, but further price falls were minor and in some years prices even rose. There are however, some quite significant differences from those years to the present.

Firstly, the current crisis has not been caused by an economically induced restriction of finance, but a socially created restriction on our movement and assembly.

Once these are lifted, economic recovery should be fairly quick.

Secondly, our population growth rate is one of the highest in the world, and this will resume when the crisis is over.

The demand for housing will not fall and rents will rise

The main take out from this comparison is that if our population keeps growing in the future (and this is highly likely), then housing demand will rise as well, especially in our major urban centres.

Another similarity with the Great Depression is that rental demand will increase and rents may rise if housing finance is difficult to obtain.

The key to survival for both renters and investors is cash flow – rents will go up and so property investors should buy in areas with the highest rental demand and insist on short leases, while renters should look for suburbs with high numbers of rental vacancies and lock in the longest possible lease periods.

There’s a 6-month moratorium on evictions – what should I do?

Is Coronavirus driving a recession, depression or an economic hit like no other?