Sydney unit prices rose by +4 per cent over the year to September 2016, according to Residex,to be be +20 per cent higher over the last two years.

Interest rates have fallen sharply since then too, so the supply response should now be in full swing.

House prices in Sydney began to increase again in September according to Residex, up by +1.9 per cent in the month to a median of $1,069,000.
However, Sydney house prices are now only +2 per cent higher than one year ago, despite being +24 per cent higher over the last two years (and +61 per cent higher than in July 2012).
Despite the apparent slowdown, auction clearance rates have surged higher again in recent weeks, which tends to be a precursor to rising dwelling prices. 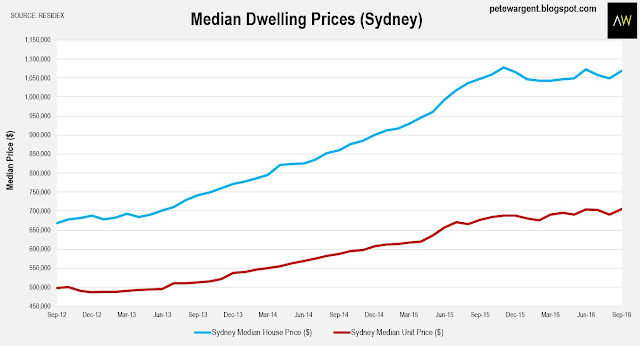 Dr. Andrew Wilson chief economist for the Domain Group noted in a presentation recently that affordability constraints both for prospective buyers and renters of houses in Sydney are biting, to the extent that the median unit rental price ($525/week) is now almost as high as that of the median house ($530/week).
Furthermore, there has been a recent uptick in house vacancy rates in Sydney to a year-high of 2 per cent, while unit vacancies tightened as tenants apparently look towards the slightly more affordable options.

Dr. Wilson’s view is that this makes a “nonsense” of the perceived apartment oversupply in Sydney, and ultimately this will bring more investors into the Sydney property market rather than fewer.

Whether or not this proves to be the case over time, the figures on more than one index do now show annual price growth for Sydney units as being higher than price growth for houses in the harbour city.

It’s worth acknowledging that house prices have been rising faster than this in some the inner suburbs of Sydney, while median prices may on occasions understate price growth as affordability pressures bite (as properties in the lower price quartiles may transact more frequently).

'Sydney unit prices rise to record high' have no comments