Almost 50 years ago I began my study of rich and successful people.

Of course, not all rich people are successful.

But I remember trying to understand why some people were rich while others kept struggling financially.

Over the years I attended many seminars, paid mentors, and read as many books as I could on the topic of success.

It wasn’t easy, I’ve had my challenges in life (mostly self-inflicted) and I’ve hit rock-bottom, but I got up again, learned from my mistakes, and moved forward.

Over the years, I grew a very substantial property portfolio, built a national business this has won multiple awards as Australia’s leading property consultant and has been involved in over $4 billion worth of property transactions, and currently manages over $2 billion worth of assets for our clients.

As you can imagine I have learned a few things about wealth and success along the way.

And a byproduct of this is my top-selling book – Rich Habits Poor Habits — that I co-authored with Tom Corley and which has become an international bestseller and translated into a number of foreign languages including.

In our book, we explain that being rich has little to do with the money itself. Instead, it has a lot to do with how you think about money.

So, if you want to become rich, one of the first steps is to know how the wealthy think about money differently than you do and to start thinking like them.

The next step is to take action and to let the action become natural by thinking the way wealthy people think.

Unfortunately, we live in a society that teaches us that money equals success.

Like many other things, money is a tool. It’s certainly not a bad thing but, ultimately, it’s just another resource. Regrettably, too many people worship it.

Now, I didn’t understand this when I began my study of rich and successful people more almost 50 years ago.

Over the years I have learned that…

Being rich has little to do with the money itself.

This means that if you want to become rich, one of your first steps is to know how the wealthy think about money differently than you do and to start thinking like them.

The next step is to take action and to let the action become natural by thinking the way wealthy people do and developing what we call Rich Habits.

In the last month’s Rich Habits Poor Habits podcast, Tom and I discussed some of the Rich Habits that are common among successful people, and in today’s show, we are going to continue this discussion, so welcome to today’s show.

Now before you get too offended…

We’re not making a judgment when we say rich people or poor people – they are terms we’re going to use to help clarify the different ways of thinking that 1% of people exhibit from the majority of the population.

So, let’s learn more about these habits,

Maybe we should clarify what habits really are:

Habits represent unconscious behavior, thinking, choices and emotions. A habit is formed when neurons (brain cells) talk to one another repetitively. Habits have a purpose.

Of course, it’s worth realising that…

The good news is that as you’re learning about these concepts in our book the choice is yours.  You can choose whether you will be a have or a have not. 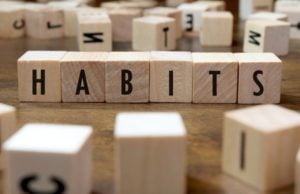 “I think one of the comments we’ve both made over the time is that any problem that money can solve isn’t really a problem.” – Michael Yardney

“I think we both realise that if you do the hard things early in your life, the rest of your life’s going to be easy.” – Michael Yardney