As expected  the RBA has left official rates on hold over November at the record low 0.1%.

Despite the near-certainty that rates would remain on hold, speculation has intensified that the RBA may now be inclined to bring forward its previous forecasts that official rates would not increase until at least 2024.

Market speculation of higher rates was driven by the latest ABS September quarter CPI data that revealed the annual headline rate fell from 3.8% to 3.0%.

However underlying inflation surged to 2.1% over the year - its highest point since 2015 and now within the preferred 2- 3% range of the Reserve Bank - just.

Although underlying inflation surged over the September quarter, the key components of the increase were clearly related to the covid constraints of the past year and are likely to dissipate as economies normalise in a post lockdown, fully vaccinated environment.

The RBA has reiterated in its interest rate decision commentary that official interest rates are unlikely to rise before 2024 with its key concerns surrounding stubbornly low incomes growth and an economy still clearly with work to do in recovering from recent severe lockdowns.

While inflation has picked up, it remains low in underlying terms. Inflation pressures are also less than they are in many other countries, not least because of the only modest wages growth in Australia.

The Board will not increase the cash rate until actual inflation is sustainably within the 2 to 3 per cent target range.

This will require the labour market to be tight enough to generate wages growth that is materially higher than it is currently. This is likely to take some time.

The Board is prepared to be patient, with the central forecast being for underlying inflation to be no higher than 2½ per cent at the end of 2023 and for only a gradual increase in wages growth.

With inflation at best just in the mid-range target at the end of 2023 but wages growth to remain subdued by comparison, this continues to confirm that 2024 - at the earliest - remains the current RBA expectation for the next increase in official rates.

Official rates were last increased in November 2010 – fully 11 years ago with average inflation over the previous year tracking at 2.9% and ABS average wages growing at a remarkable 3.4% courtesy of the mining boom.

By contrast, annual wages growth has averaged a record low 1.5% over the past 12 months and is likely to be constrained by the recent lengthy lockdowns in NSW and VIC.

The opening of borders and the resumption of mass migration will also act to subdue wages growth. 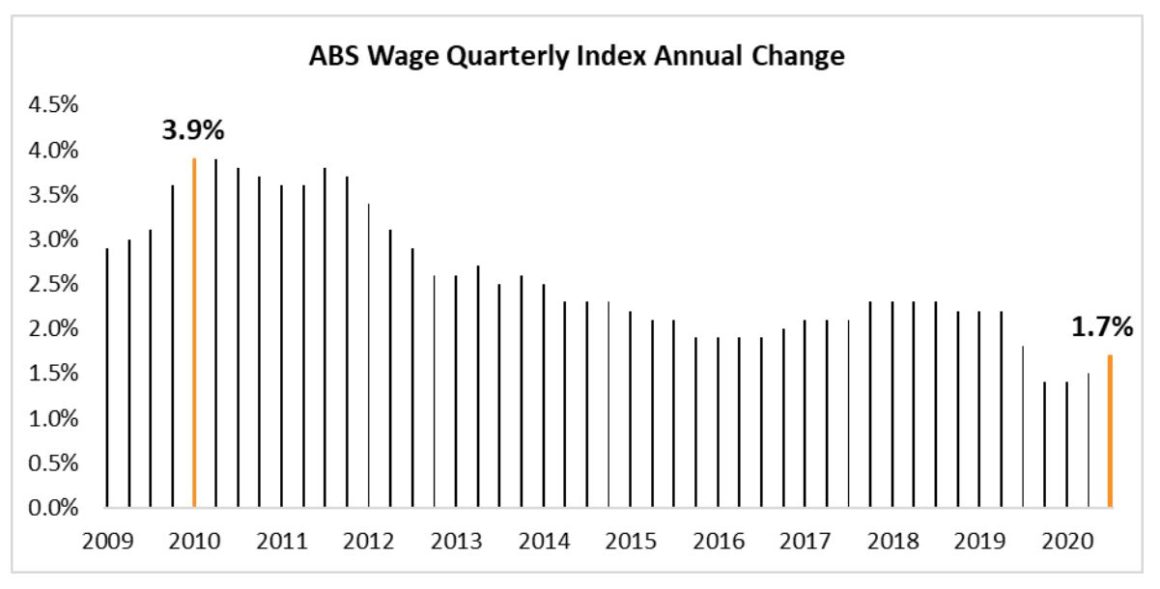 With wages growth at record low levels and a spike in underlying inflation, the sobering prospect of falling real wages will only harden the clear resolve of the RBA and subdue irrational higher rate speculation – for now.

ALSO READ: [Podcast] Have you heard the one about rising interest rates? With Dr. Andrew Wilson