More of us are expecting inflation - this matter because actual inflation depends, in part, on what we expect it to be.

Inflation expectations jumped by 0.7% points to 5.8% in March 2022 – the second biggest monthly jump in the history of the index.

Inflation Expectations have been consistently higher in Country Areas than in Capital Cities since bottoming in mid-2020 during the early stages of the pandemic and that trend continues in the early months of 2022.

Inflation expectations are simply the rate at which people—consumers, businesses, investors—expect prices to rise in the future.

They matter because actual inflation depends, in part, on what we expect it to be.

If everyone expects prices to rise, say, 5 percent over the next year, businesses will want to raise prices by (at least) 5 percent, and workers and their unions will want similar-sized raises.

It's the Reserve Bank's mandate is to achieve maximum sustainable employment and price stability which is usually defined as an annual inflation rate of between 2 and 3 percent on average.

However now more and more Australians are expecting inflation to rise significantly.

In March 2022 Australians expected inflation of 5.8% annually over the next two years, up a large 0.7% points from February 2022, according to the latest Roy Morgan Inflations Expectations research.

The level of Inflation Expectations in March is the highest for nearly a decade since September 2012 (5.8%).

The increase in March was the biggest monthly jump in the index since Inflation Expectations increased by a record 0.8% points in January 2011 to a record high of 6.6% during the middle of the then ‘Mining Boom’.

The steep rise in Inflation Expectations in March came as the average Australian petrol price hit a record high of $2.13 per litre in the week to Sunday, March 20  before a halving in the petrol excise, and lowering international oil prices, sent the price plunging over the next four weeks. 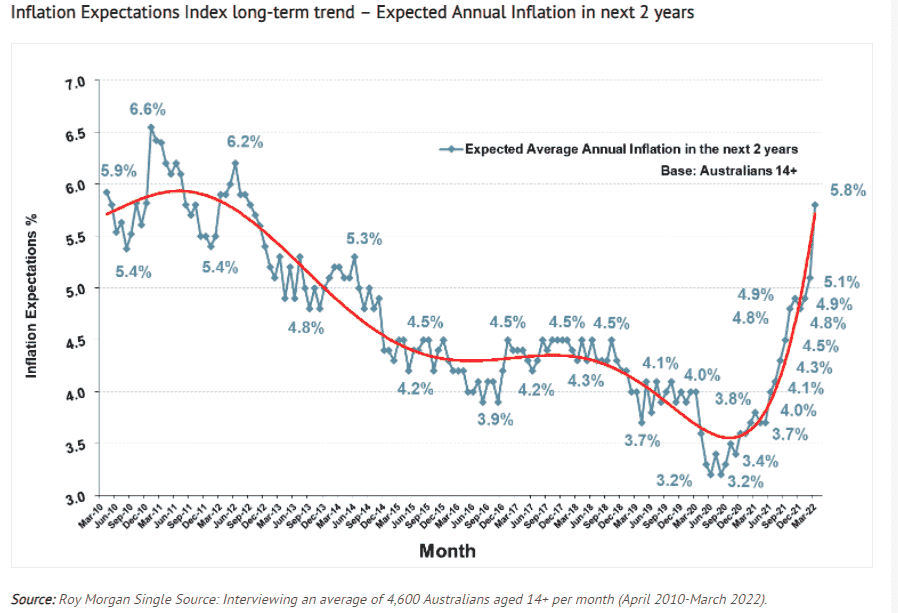 The spike in petrol prices following the Russian invasion of Ukraine in late February prompted a large jump in global energy prices, including for petrol in Australia, and this is reflected in Australians’ Inflation Expectations for the month of March.

Inflation Expectations jumped by 0.7% points to 5.8% in March 2022 – the second biggest monthly jump in the history of the index.

The near-record jump has propelled the index to its highest since September 2012 (5.8%) during the middle of the ‘Mining Boom’ a decade ago.

Of course, there was an obvious factor driving Inflation Expectations higher in March – the Russian invasion of Ukraine which sent energy prices soaring around the world.

In Australia the direct impact of the soaring global energy prices was felt at the pump as average petrol prices jumped from $1.79 per litre in mid-February (before the Russian invasion) to a record high of $2.13 per litre in mid-March.

The rapid increase in the price of petrol by 34 cents per litre in only a few weeks came after the petrol price had already increased by 21 cents per litre since the turn of the year.

However, in the Federal Budget at the end of March delivered by Treasurer Josh Frydenberg cut the fuel excise in half.

This cut to the fuel excise effectively slashed 25 cents per litre off the price at the bowser, and with falling international oil prices during this period, the average petrol price has now fallen to $1.66 per litre – down 46 cents per litre (-21.7%) from mid-March.

Inflation Expectations are highest for supporters of ‘Minor Parties and Independents’

Overall, Inflation Expectations are up a large 2.6% points since the low point of June 2020.

Inflation Expectations are highest for supporters of ‘Minor parties and Independents’ at 7.2%, up a large 2.9% points compared to June 2020.

Heading towards next month’s Federal Election the prospects of increasing inflation, and the likelihood the RBA will increase interest rates for the first time since November 2010, are playing on the minds of voters.

Almost as high are the Inflation Expectations of those who ‘Can’t say' who they would vote for, up 3% points to 6.5%. 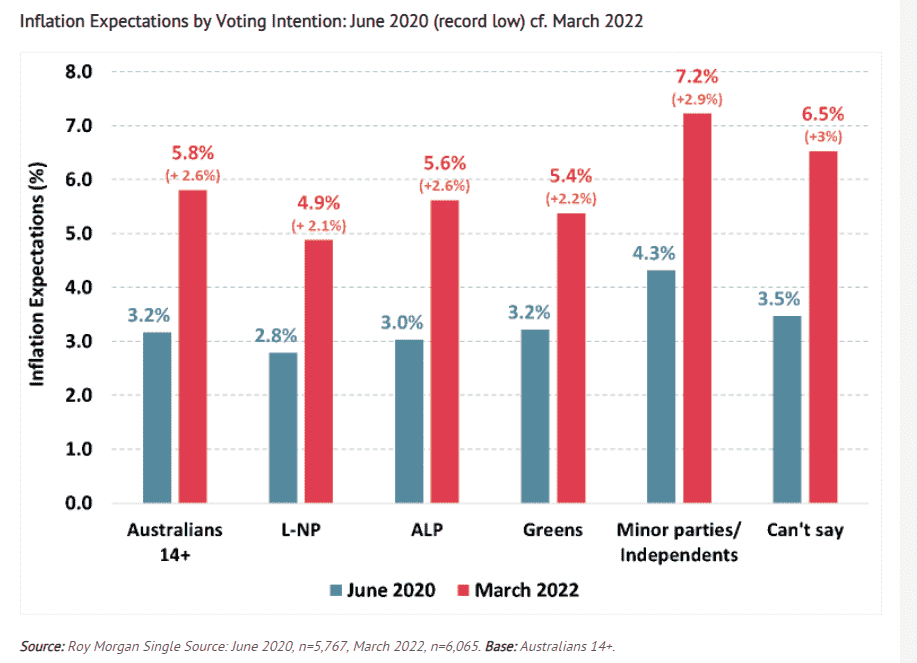 In comparison, the Inflation Expectations of L-NP supporters, ALP supporters and Greens supporters are all lower than the national average.

These voters are rejecting the major parties and opting for alternatives and it is the high and rising prices they see that play a big part in their decision to find a smaller party to support.

The latest Roy Morgan Poll on Federal Voting Intention shows 29.5% of electors not supporting either of the two major parties – an increase from 25.3% at the 2019 Federal Election.’

The high inflation conditions many Australians are experiencing are driving people away from both the L-NP and ALP and increasing the chances Australia could end up with a hung Parliament following next month’s Federal Election – which is already tightening as the L-NP recovers ground on the ALP.

Inflation Expectations continue to be higher in Country Areas (6.3%) than in Capital Cities (5.6%)

Inflation Expectations have been consistently higher in Country Areas than in Capital Cities since bottoming in mid-2020 during the early stages of the pandemic and that trend continues in the early months of 2022 as the index has soared.

On a State-based level Inflation Expectations were highest in Tasmania at 6.2%.

Inflation Expectations were slightly higher than the national average at 5.9% in NSW, Queensland and South Australia.

This week the latest ABS quarterly Consumer Price Index for the March quarter 2022 is set to be released and there are expectations of a significant jump in the index.

The large spike in energy prices in March will flow through to the CPI Index, although this increase only impacted the final month of the quarter so may not have as large an impact as some are expecting.

The Australian CPI figures are still set to be well below those of counterparts including the USA, UK and New Zealand.