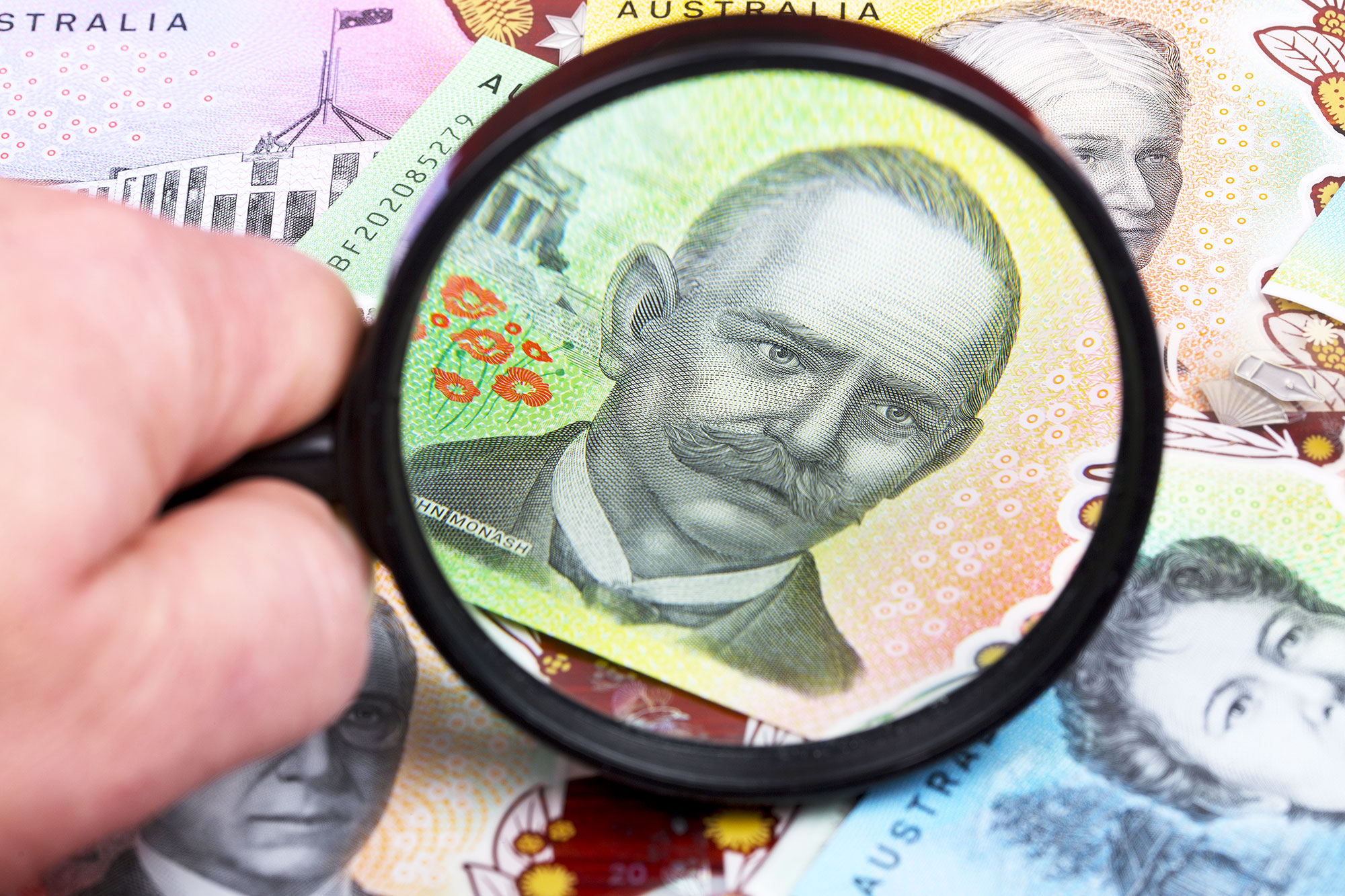 The past few weeks have seen mounting speculation around what changes could be coming for the housing lending space. 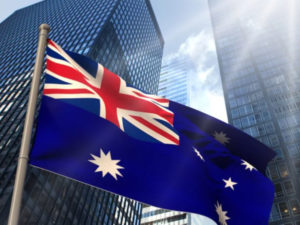 The Council of Financial Regulators, which includes the banking regulator APRA, flagged the need for sound lending standards to be maintained, with signs of “some increased risk-taking” appearing in mortgage lending.

Examples of more risky debt and lending environments have been trickling through various data releases over the past few months.

It became increasingly clear that ‘macro-prudential’ intervention (policies aimed at securing financial stability) was a case of ‘when’, not ‘if’.

Essentially, banks would be expected to test whether a borrower could repay a mortgage, if the mortgage rate is three percentage points higher than the production rate on offer.

APRA advised the buffer should be implemented by the end of October 2021.

Importantly, major banks already have a required buffer of 2.5 percentage points in the serviceability assessment process, which was introduced in 2019, or a minimum interest rate level to assess serviceability (also known as a ‘floor’ rate), which averaged 5.09% across the major banks in June.

This includes a proactive increase to the floor rate of 15 basis points from CBA in June.

Banks must use whichever rate is higher to assess serviceability, which plays into the subtle targeting of this new recommendation from APRA.

Because owner-occupier mortgage rates are lower than investor rates, these changes may actually have more impact on the investment segment of the market. 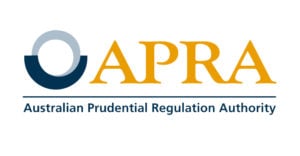 Additionally, as APRA notes in their announcement, investors tend to be more leveraged in their borrowing behaviour and maybe carrying additional housing debt which would also be subject to the increased serviceability assessment.

Figure 1 compares the change to interest rate assessment based on the current average mortgage rate for new owner-occupier loans (which was 2.36% through August) and investor loans (2.72%).

Using the average owner-occupier rate as an example, APRA’s announcement would mean borrowers could need to demonstrate the ability to repay a mortgage with an interest rate of 5.36%.

But given floor serviceability rates would have been pretty close to these levels anyway, the measure is not as drastic a change for owner-occupiers, with the hypothetical showing an increase in assessment rates of 27 basis points from 5.09%, to 5.36%.

This is opposed to a 50 basis point rise for investors.

Owner-occupier borrowers may be more likely to be assessed on the buffer rate under these changes, rather than the floor rate.

But even in this scenario, the mortgage rate buffer going from 2.5 to 3.0 percentage points seems like a subtle approach to financial stability and will likely only impact at the margins of borrowing demand. 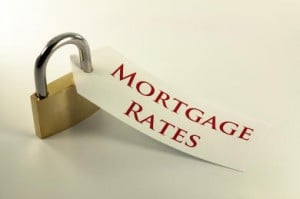 Perhaps this is also a lesson learned from the relative shock created to the housing market in 2017 when the new interest-only mortgages were limited to 30% of new housing lending.

A chart of monthly housing market movements across Sydney against previous macro-prudential measures can be seen in figure 2.

Housing market values experienced a peak to trough decline of - 8.4% off the back of macro-prudential changes in 2017 at the national level.

The decline was sharper across heavily concentrated investment markets like Sydney (-14.9%) and Melbourne (-14.1%).

This subtler change to lending conditions is far less likely to move the housing market into negative territory, and APRA estimates the typical maximum borrowing capacity would only be reduced by about 5%. 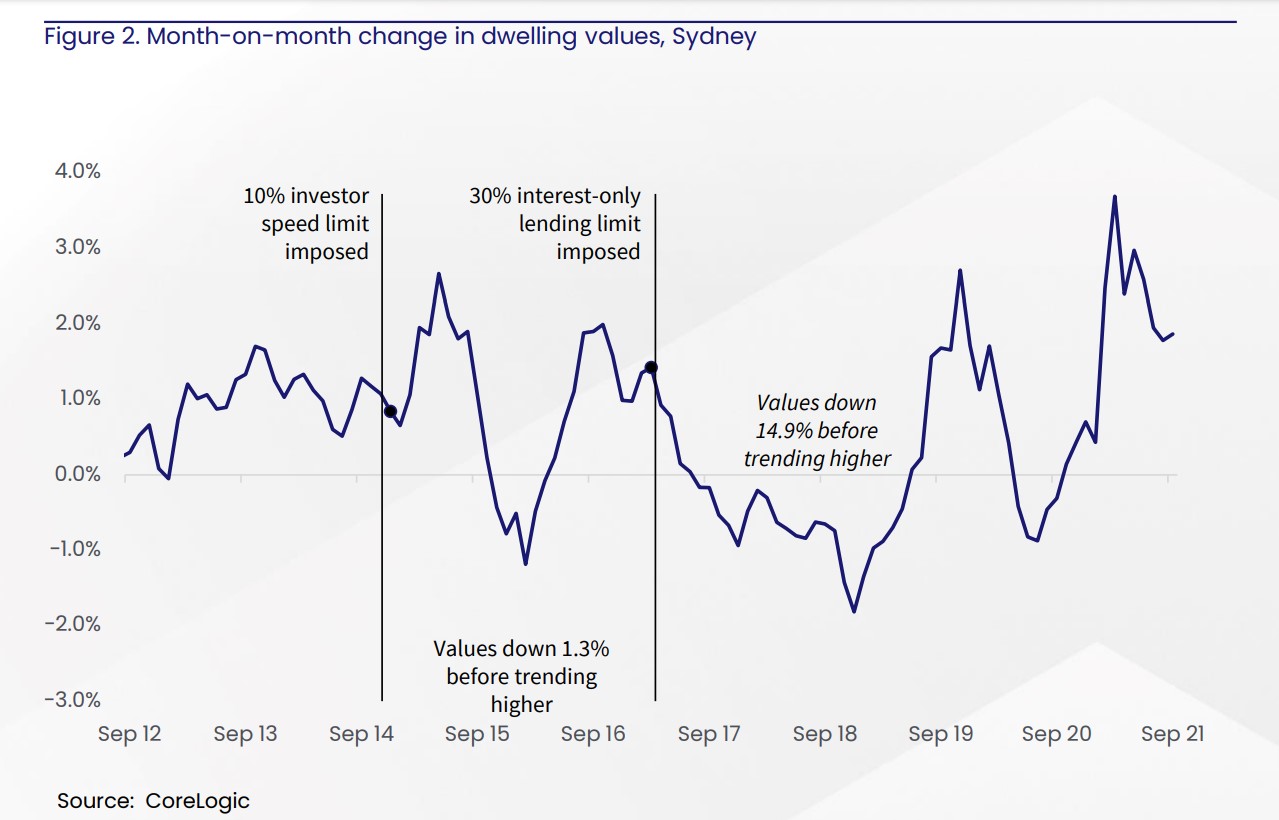 While APRA’s announcement may seem like it won’t have much impact on demand for credit, it is worth noting that this may not be the end of macro-prudential changes. 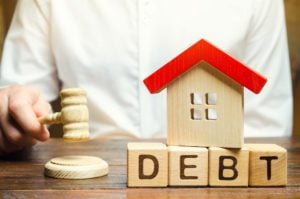 A lot of focus has also been on high ‘debt-to-income’ ratios – a statistic expressing a borrower’s pre-tax income divided by their total debt levels.

In his letter to lenders, APRA Chair Wayne Byres flagged that if new mortgage lending on high debt-to-income ratios remained at high levels, it “would consider the need for further macroprudential measures”.

It has also been stated by the regulator that implementing a limit on high debt-to-income ratios is “operationally complex”.

Therefore, while the announcement may seem like a subtle change to housing lending conditions, there may be more tightening to come as the Council of Financial Regulators monitors trends in housing credit and household debt.