Now that’s an important question if you’re a property investor or in business.

Each month the Reserve Bank meets to discuss the state of the economy and set official interest rates and then releases its minutes to explain the reasons behind their monetary policy decision and a chart pack which I summarise for you here at Property Update .

This month there’s good economic news, even though you may have missed it if you read the mainstream media.

The latest ABS’s figures show we’re creating more jobs than we have done in a long, long time (more than quarter a million jobs created in six months), but wages growth remains low as does consumer confidence.

Anyway… let’s see what the RBA has to say:

As always, it’s important to start with the international context…

Conditions in the global economy have improved.

Labour markets have tightened and above-trend growth is expected in a number of advanced economies, although uncertainties remain.

Growth in the Chinese economy is being supported by increased spending on infrastructure and property construction, with the high level of debt continuing to present a medium-term risk.

Australia’s terms of trade are expected to decline in the period ahead but remain at relatively high levels.

However, the IMF has identified a number of potential risks to the global economy, including inflated asset prices, a growing trend toward protectionism and the outlook for the Chinese economy.

Wage growth remains low in most countries, as does core inflation.

Is this the end of low interest rates?

In the United States, the Federal Reserve has indicated that it will begin the process of balance sheet normalisation in October and that it expects to increase interest rates further.

In the other major economies, there is no longer an expectation of additional monetary easing.

Financial markets have been functioning effectively and volatility remains low. And the Australian economy keeps chugging along, expanding by 0.8 per cent in the June quarter.

This outcome and other recent data are consistent with the the RBA’s expectation that growth in the Australian economy will gradually pick up over the coming year.

However, economic conditions continue to vary across the states.

Recently, economic growth has been strongest in Victoria, New South Wales and ACT  and weakest in Western Australia.

The Consumer Price Index (CPI) rose 1.9 per cent through the year to June quarter 2017.

Employment has continued to grow strongly over recent months.

Employment has increased in all states and has been accompanied by a rise in labour force participation.

The various forward-looking indicators point to continuing solid growth in employment ahead, although the unemployment rate is expected to decline only gradually over the next couple of years.

This is likely to continue for a while yet, although the stronger conditions in the labour market should see some lift in wage growth over time.

Inflation also remains low and is expected to pick up gradually as the economy strengthens.

Retail sales have picked up recently, but low consumer confidence, slow growth in real wages and high levels of household debt are likely to constrain growth in spending.

At a time when household income growth has remained weak there has also been a further decline in the household saving ratio.

Having said that Australian households are amongst the wealthiest in the world, with our assets (primarily in real estate) increasing in value faster than our liabilities (due to low interest rates).

Consumer sentiment, while remaining  fickle and is slowly picking up, but currently more people are pessimist about their future than people who are optimistic.

After a heady start to the year,

While the CoreLogic September hedonic home value index results recorded negative growth conditions for Sydney, from city to city, the overall housing market performance is as diverse as ever.

The September results confirmed that dwelling values edged 0.2% higher across Australia over the month, led by a 0.3% rise in capital city values and a 0.1% gain across the combined regional markets. 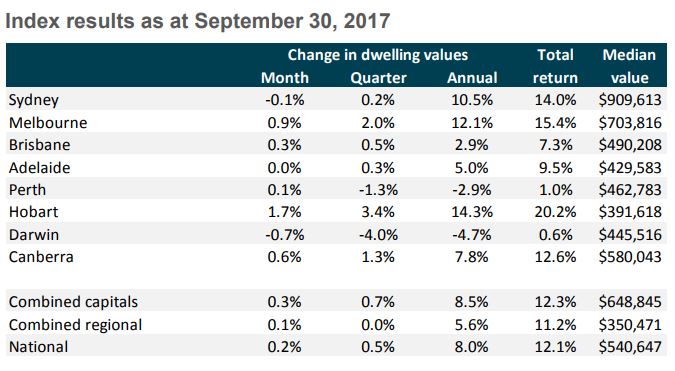 Not surprisingly, these figures are mirrored by the other property data providers:

And as expected at this stage of the property cycle, housing starts are declining as are building approvals for new dwellings.

This is a good thing as supply of new apartments is currently  running ahead of demand, particularly in the Brisbane CBD.

APRA is getting its way… the latest ABS Housing Finance data shows a sharp drop in investor housing commitments.

All in all, Australia’s economy is sound and looking a little better as we’re creating more jobs than ever.

At the same time, the world economy, while fragmented is also picking up.

In the meantime our property markets have moved to the next phase, one of lower growth – and that’s a good think as the fast pace of growth, particularly in Sydney and Melbourne was unsustainable in the context of a period of low economic growth with low inflation, low wages growth and low interest rates.

But while our markets are down, they’r not out…

Louis Christopher, of SQM Research, who has the best track records of the many commentators out there, has made the following forecast for next year in his boom and bust report, suggesting more moderate property price growth in 2018 : 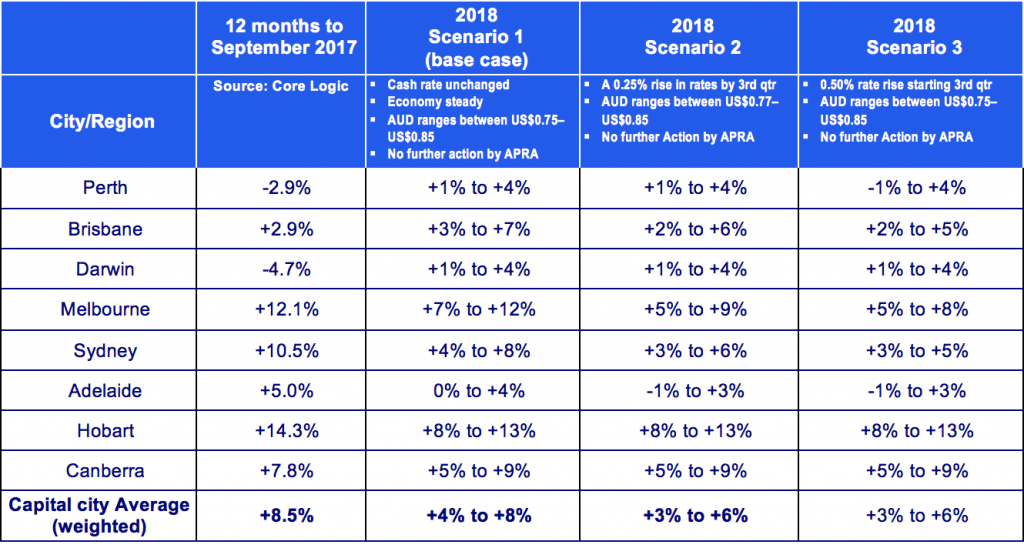