The Melbourne property market’s strength over the last year or two has confounded many property pundits.

Despite some areas of oversupply (like in the CBD apartment market and house and land packages in the outer suburbs) property values throughout most suburbs of Melbourne just keep increasing.

In fact Melbourne dwelling prices have increased by 7.8% in the last year according to RPData.

Sure Melbourne was voted the world’s most liveable city   for the third time in a row, but there’s more to it than that.

Melbourne’s population is swelling by 2 per cent a year, adding more than 900,000 people since this century began – and putting it on track to be a city of 8 million people by 2050.

The Bureau of Statistics estimates that in mid-2012, the city’s population was about to hit 4.25 million, after six boom years in which it grew by almost half a million.

Recent bureau figures imply that Melbourne today is home to 4.35 million people – and 27 per cent bigger than the city it was at the start of 2000.

If growth continues at that rate, Melbourne’s population would pass 5 million by 2025, overtake Sydney by 2037, and reach 8 million by 2049.

The ABS reports that South Morang had the biggest population growth of any suburb in Australia, growing by 500 people a month over the five years to 2012. Point Cook was second, Tarneit third and Craigieburn fourth.

While most of Melbourne’s and most of this growth is in the outer suburbs – properties in these areas do not necessarily make good investments.

Physical growth does no mean capital growth in property values

In fact lack of infrastructure, the oversupply of new dwellings and the demographic mix in many of Melbourne’s outer suburbs has meant that capital growth has been poor there.[sam id=37 codes=’true’]

However these aren’t good places to invest either.

Despite strong population growth in these inner city regions, the continual conveyer belt of new apartments has led to an an oversupply of property, high vacancy rates and poor capital growth.

So where should one invest in Melbourne?

I’ve covered this in a fe wrecent blogs but in case you missed them  I strongly believe the inner and middle ring suburbs of our capital cities are the place to invest in property.

I’ve recently quoted a study which proves not all land is created equal and that’s why you should invest in the inner suburbs.

I also blogged about another study that showed the inner suburbs are where to invest in property  I explained it didn’t surprise me to read in The Age  that Melbourne could soon have a dual economy: a permanently prosperous inner city, surrounded by ”client” suburbs where jobs are hard to get to and lack security, a new study warns. 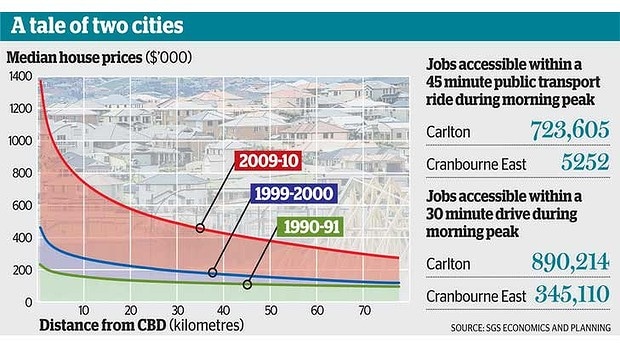 Melbourne’s population is likely to increase by 10% in the next 5 years (that’s just extrapolating the last few years of capital growth into the future), and this plus our relatively robust economy will underpin our property markets, but many of these new immigrants will want to move to where the action is and where the jobs are – but they can’t all fir into the inner and middle ring suburbs.

Of course this will push up property values and that’s why I’ll be putting my money in selected inner and middle ring suburbs. That’s where the strongest growth has been in the past and that’s where it will be in the future.