Figures released by SQM Research this week have revealed that the number of residential vacancies nationally has remained tight during March, recording a vacancy rate of 2.3%, and 70,493 vacancies.

Canberra recorded the largest monthly fall, with vacancies falling 0.2 percentage points during the month of March. Melbourne also experience a monthly fall, with percentage points down 0.1% over the month of March to now have a vacancy rate of just 1.9%.

In contrast, Perth and Brisbane recorded a rise in vacancies during the month of March, with vacancies up 0.2 percentage points for Perth.

March results for Sydney, Adelaide, Darwin and Hobart remained the same over the month of March.

Once again, Hobart revealed the tightest rental market recording a vacancy rate of just 0.9% based on just 236 vacancies.

Notably, according to SQM Research, Darwin has recorded ongoing falls in asking rents of 9.7% for houses and 10.6% for units over the past 12 months.

Yearly falls have also been recorded in Perth, with asking rents down 8.9% for houses and a considerable 9.0% for units.

Hobart continues to record the most affordable rental accommodation with rents for houses at just $345 a week, while units on average rent for $276 a week.

Overall national vacancy rates remain steady however there is contrast in the market place and some current misperceptions over areas of oversupply.

Right now the data suggests the areas of oversupply are confined to Perth, Darwin and the Brisbane CBD.

Other bodies have suggested Melbourne should be classified as oversupplied.

On this point, our data suggests otherwise.

Vacancies rates for Melbourne have actually been in a downtrend now since 2014 and are now below 2%.

Even in localities well known for elevated vacancies, such as the CBD, Docklands and Southbank, our number suggests vacancies have actually been falling in these specific localities.

They have now fallen to levels below their long term average and certainly below levels that we were publicly concerned about, but no longer are as concerned. 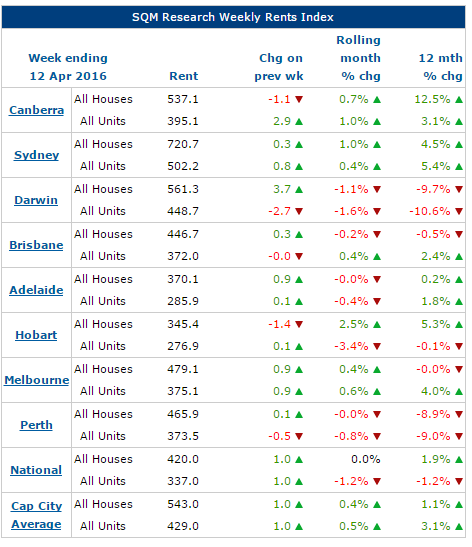