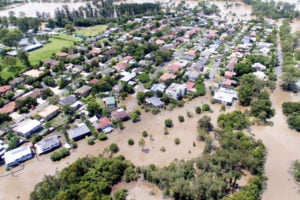 However, the end of February was a sobering reminder of the impact of extreme weather events and climate change.

Numerous enquiries from the industry and media have reached CoreLogic regarding how current floods will impact property values, rents and the availability of dwellings. 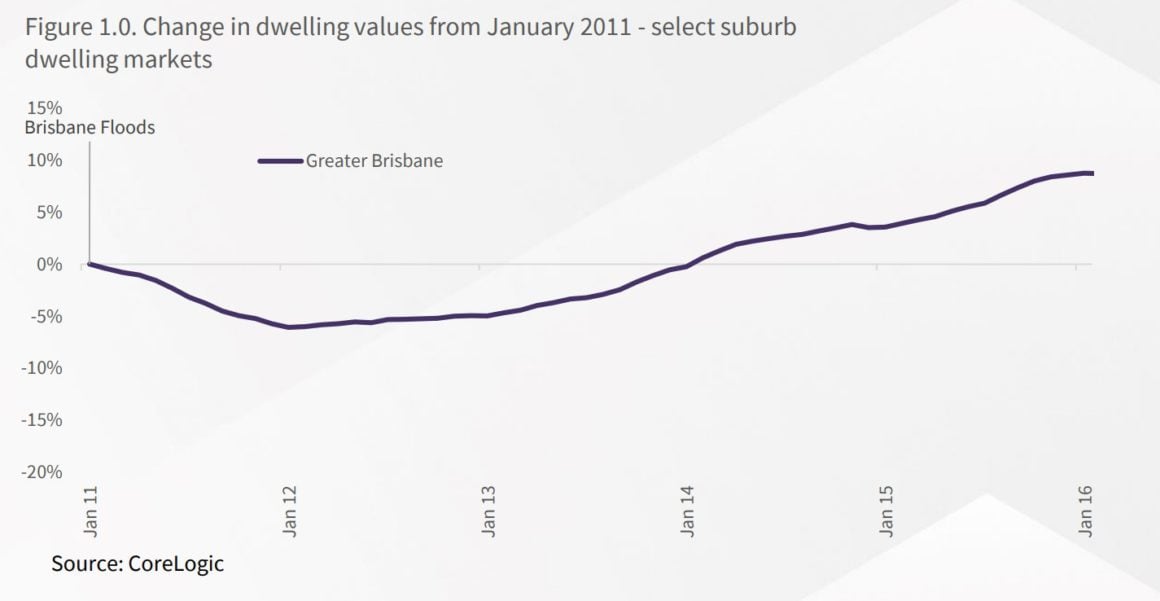 This decline kicked into recovery mode off the back of several cash rate reductions from November 2011.

However, it was not until March 2014 that the dwelling market fully recovered the value recorded in December 2010.

It is difficult to isolate the impact of flooding on property values, as Brisbane dwelling values were already trending lower from mid-2010.

This decline was triggered by a tightening in monetary policy amid a resources boom and Australia’s recovery from the GFC.

Figure 2 summarises the Greater Brisbane Home Value Index against a selection of eight suburbs that were inundated with flooding in January 2011, showing the change in dwelling values for each market. 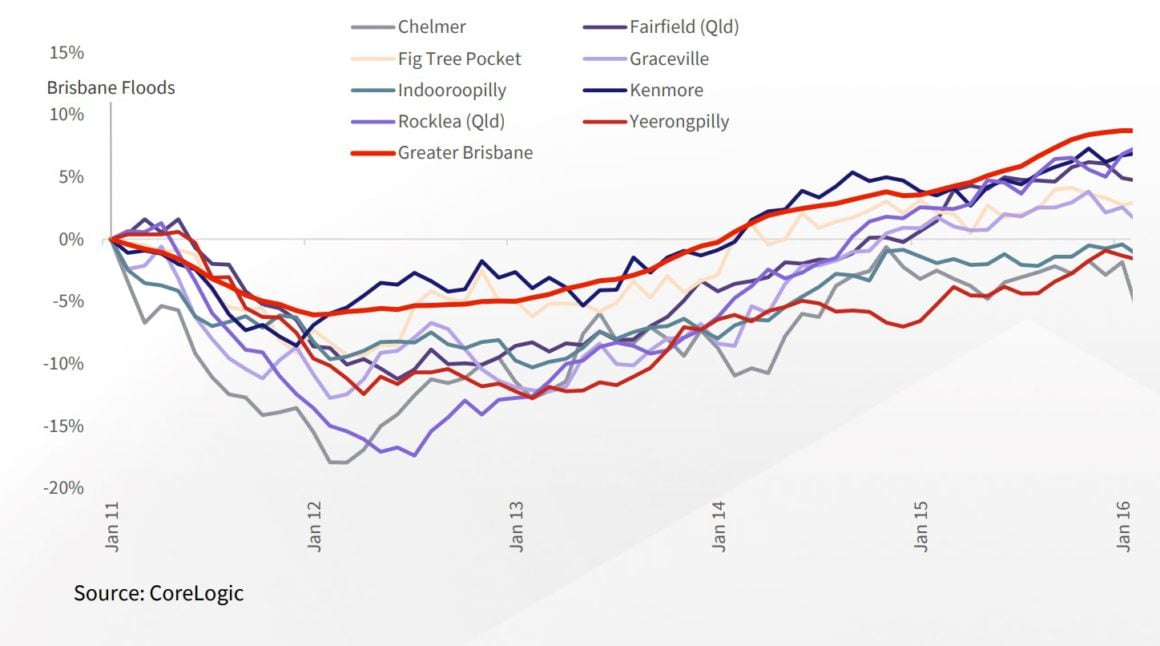 Figure 3 shows the depth of the downturn in values from 2011 and the time taken for each market to recover.

Across the select suburbs, it took an average of 5.1 years for values to recover to January 2011 levels, with flood-affected areas recording a sharper decline in dwelling values than greater Brisbane. 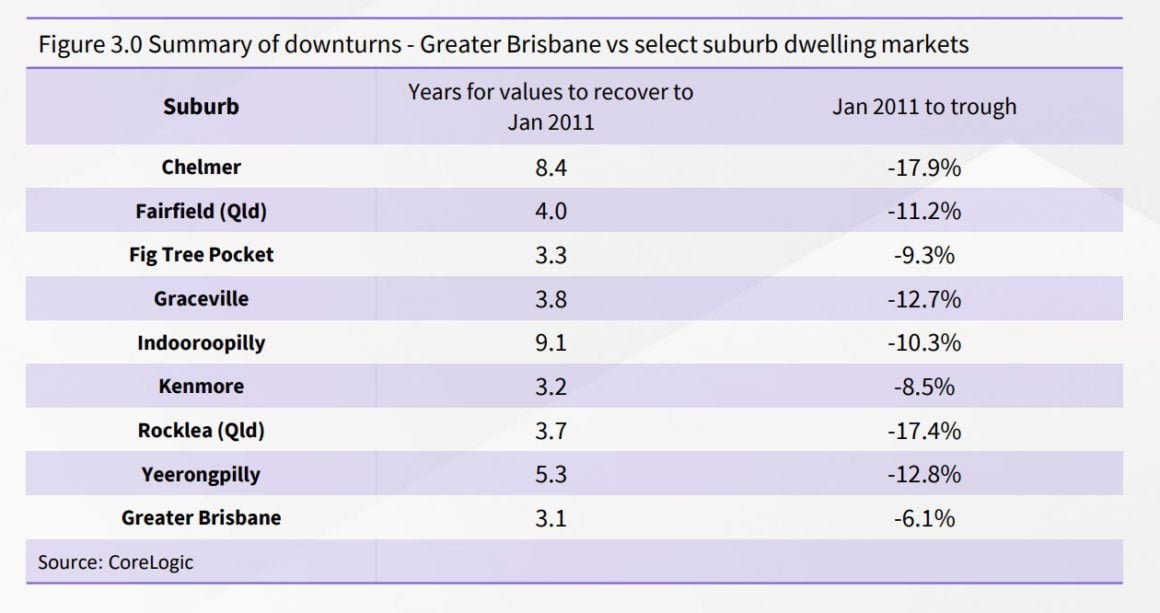 Although the 2011 floods saw inundated suburbs recording a larger downturn relative to the Brisbane average in the year following the flood, most suburbs saw a recovery in prices within three to five years with riverside precincts still attracting premium values over areas located further from the river prior to the latest flooding event.

Australians have historically placed a high value on housing within close proximity to the water; whether this trend changes based on forecasts of more frequent severe weather events is yet to be seen.

Another notable impact on the Brisbane market through this period was a decline in transaction activity.

Through January 2011, monthly sales volumes reached their lowest level over the past 20 years, at 2,115 transactions across Greater Brisbane.

New listings added to the market were also notably lower through January 2011 compared to the previous year (down - 27.8%), but increased remarkably in the following month (jumping 46.8%). 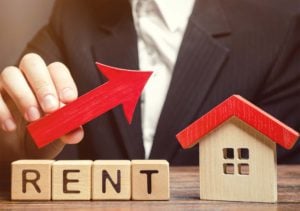 A similar decline in new listings, followed by a rebound in February was similarly evident in the suburbs presented in Figures 2 and 3, suggesting sales and listings did start to pick up after the event.

Rental values across the eight suburbs analysed from 2011 did not show a decline in the hedonic rental value index.

Instead, rent values increased an average of 4.3% over the year to January 2012.

This may be due to more subdued rental stock levels available at the time, which could have put upward pressure on advertised rents.

Perhaps one of the biggest differences between the market in 2011 and 2022 is the length of time between these devastating extreme weather events.

In 2011, major flooding had not affected the region since 1974, and flooding of this nature was considered a ‘once in a 100-year event.’

For current homeowners, it has been just over 11 years.

This short time frame between significant flooding events could:

• result in higher insurance premiums, which may dissuade buyers from areas vulnerable to flooding

• elevate repair/renovation costs at a time when the building industry is already experiencing high demand, and labour and material shortages

The financial impact of floods 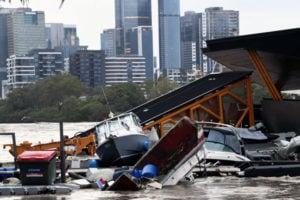 The cost and implications for the housing market of the current floods are difficult to evaluate, given that for many coastal areas, clean up and damage assessment is yet to commence.

Additionally, the operational environment is very different, with monetary policy more likely to tighten in the next 12 months, as opposed to 2011, when the market was supported by a fall in the cash rate within a year of the flooding event.

Ultimately, this event reinforces the consequences of climate change, which poses a great challenge to the real estate and finance sectors now and in the future.

Given the extreme flooding event, which is catastrophic, I would expect that prices for areas that did not flood to increase first. Where rebuilds are necessary, houses should be drought proofed- use the Queenslander design. This needs also to be do ...Read full version