Cooped up: 1 in 4 Aussie Millennials live at home after 30

Are you still living at home with mum and dad?

Well...according to new research by Finder, young Australians are putting off homeownership in favour of staying at home with their parents.

The survey asked Australians how old they were when they reached major life milestones, if at all. 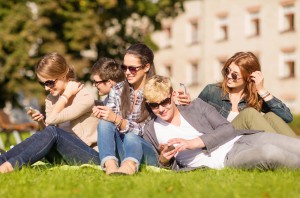 The research found a stark housing generational gap, with young Australians now getting into the property market later than their parents.

Nearly two-thirds (62%) of Baby Boomers had bought their first home by age 30, compared to 42% of Gen X and 34% of Millennials (note there are some Millennials still aged under 30).

At the same time, young adults are spending more time living with their parents.

The vast majority of Baby Boomers (92%) had moved out of their childhood home by age 30, compared to 75% of Gen X and 72% of Millennials.

Affordability had reached a fever pitch.

“Many young people are concerned that unanticipated price growth over the last couple of years has ruined their chances of buying a home.

“The pandemic had a disproportionate impact on young Aussies, who were more likely to lose work or have their studies disrupted.

“They’re also the least likely to have benefitted from rising house prices – resulting in a double whammy blow to their finances.”

While the average Western Australian gets into the property market at age 27, those from New South Wales don't sign their first home until age 34 – a mighty 7 years' difference.

Despite low-interest rates reducing borrowing costs for homebuyers, Finder analysis found Millennials are paying 4.9 times more for a home than Baby Boomers did. 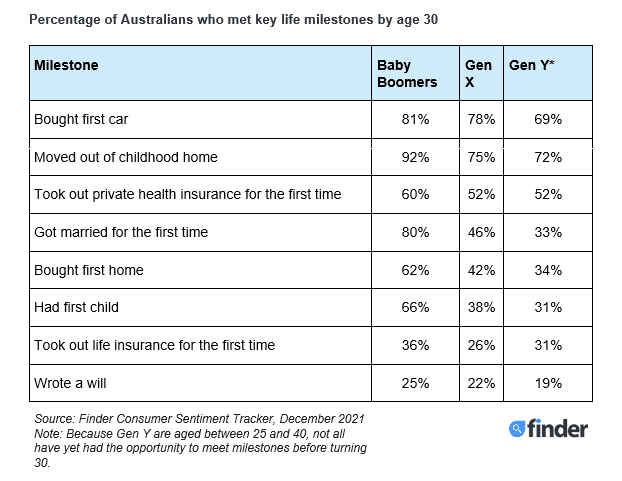 Megginson said the future is not as dire as some might think.

“Aussies aren’t just putting off homeownership because they can’t afford it – many young people are choosing to take time to travel or invest in their studies.

“Now that some of the heat has come out of the property market, and with prices expected to fall slightly in the year ahead, you might actually be in a better position to buy in the near future.

“If you want to buy sooner than later, there are low-deposit home loans that help you purchase a home with as little as 5% deposit.

“Just make sure you crunch the numbers so you know you can afford your mortgage repayments.”

Interestingly, the research also found Australians pass most of their milestones in their late twenties and early thirties, but aren’t at their happiest until their 83rd birthday.