Brisbane has recorded its eighth consecutive quarter of house price growth with an increase of 1.5 per cent reported over the June quarter, according to APM Pricefinder.

The Brisbane housing market has finally recovered recording a new record house price over the quarter of $477,352.

The latest result is now 1.1 per cent higher than the previous highest Brisbane median house price of $472,259 recorded over the March quarter 2010 – four years ago.

The Brisbane median house price increased by a solid 6.9 per cent over the 2013-14 financial year which is the best annual result since the June quarter 2010.

Brisbane ranked third for annual house price growth for the capitals behind Melbourne at 10.3 per cent and the booming Sydney market where house prices increased by 17 per cent. 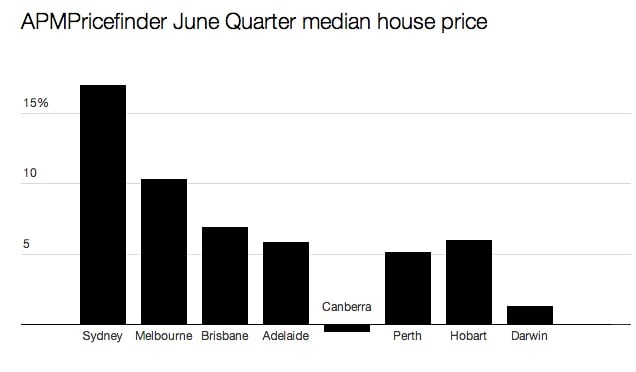 Although Brisbane house prices recorded a solid result over the June quarter, unit prices remained subdued reporting a fall of 0.2 per cent.

The June median of $364,641 for units remains 4.4 per cent below the previous peak price recorded over the June quarter 2010. The Brisbane median unit price fell marginally by 0.7 per cent over the year ending June.

Latest ABS home loan data for Queensland supports continuing growth in the local Brisbane market with finance for home sales increasing by 9.2 per cent over May compared to April.

The Brisbane housing market is set to continue its solid revival through the rest of 2014 with prices growth for the full year likely to be similar to that recorded over 2013.

Low interest rates, a gradually improving local economy, restored and rising confidence and increased activity from investors attracted by high yields and the prospect of continuing capital gains from one of most affordable capital city markets will keep buyer activity ticking over.