Australians appear to be stuck in a debt rut with new RBA figures showing credit card debt accruing interest is hovering around $20 billion for the tenth month in a row.

While significant progress has been made over the last two years, with credit card debt dropping by $9.24 billion, it appears the debt that’s left is stubbornly hanging around. 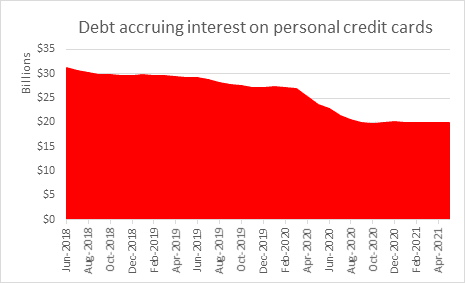 Credit card debt struggles may be exacerbated by the impact of lockdowns and the level of debt could rise in the coming months as the financial impact of the recent lockdowns is felt.

Already the data points to higher spending with the value of purchases rising by 1.77% in May.

While paying down credit card debt is becoming harder, fewer people are taking out credit cards with a drop of more than 856,000 credit card accounts in May compared to the same time last year.

“The end of JobKeeper was always viewed as a test of our determination to cut credit card debt, and unfortunately in May we missed the mark, running up a modest $100 million more.

The number of credit cards on issue has continued to fall, confirming the intent not to again repeat the stumble into this high-cost debt. If we can keep the growing buy now pay later debt from ending up on credit cards, we will be moving in the right direction.

Purchases on personal credit cards increased in May and this trend is likely to continue.

Consumers have pivoted, in this case to spending online, and we’re expecting spending during the current Sydney lockdown to repeat the pattern.

The quest for freedom from debt requires discipline and restraint, but also the smarts to get into a low rate card and take advantage of zero interest balance transfer deals.”

“Incredibly, in just two years, Australia’s credit card debt has been cut by almost a third, but now that momentum has been lost.

Australia appears to be stuck in a credit card debt rut,” she said.

While debt accruing interest is hovering around $20 billion, the number of credit card accounts is continuing to drop, which means some people may actually be taking on more debt.

For anyone struggling with credit card debt, don’t give up. There are options available to help you get back into the black.

One option is to switch the debt to a personal loan where you are given a schedule to repay the money in full, without being able to rack up new debt.

There is a possible credit card debt might continue to creep up again slightly in the coming months as small business owners and casual workers affected by lockdowns turn to their credit cards to pay the bills.

Don’t be afraid to call your bank to see what options they can offer you.

Banks have hardship policies in place to help you get through.”