Should we be worried about the level of household debt in Australia?

I had to share my thoughts with you today because once again I heard a doomsayer this morning chasing a media headline telling us that the “staggering” levels  of  household debt will be be the catalyst for our “housing bubble bursting” and will also lead to a recession.

He was telling us that we can’t keep saying “Australia is different” and “it can’t happen here.”

Of course “it” can happen here, BUT Australia is different!

Yes, the level of household debt in Australia is higher than it has ever been, and the average Australian has more debt relative to their income than just about anyone else in the world.

But when you dig deeper you’ll find that it’s not really a problem.

The real problem is the nervous nellies who take certain statistics in isolation rather than looking at the complete picture.

As I see it, in general, our debt is in the hands of those who can afford it – and, in today’s low interest rate environment, it’s easier than ever for them to afford it .

And importantly, what the pessimists miss is that on the other side of the ledger there are substantial income producing assets supporting the debt.

In an article in Yahoo economist Stephen Koukoulas explains some basic facts about household debt and wealth in Australia at the moment. He says:

Household debt is 190 per cent of household disposable income.

In addition to that are so-called household financial assets, which includes things like superannuation balances, bank deposits, direct share holdings and the like. The value of these assets is approximately 430 per cent of household disposable income.

In turn, this means ‘net’ household wealth – which is the sum of all assets minus all liabilities (debt) is approximately 750 per cent of income.

The worrywarts on household debt seemingly frame their miserable, scare-mongering analysis on the fact that householders may be stressed if there is a sharp rise in interest rates or if the value of financial assets cascades or if there is some other disaster.

Now I agree with Koukoulas, and the fact is… interest rates are going to remain low for a long, long time. So no worry about rising rates causing an issue.

The only thing that would cause the RBA to push up rates is if we have a boom that they wish to slow down, but before that the value of our assets would have to rise substantially, supporting our debts even more.

The average Australian household is in a comfortable financial position.

The chart below, which is produced by the RBA each month shows that the Australian household balance sheet is very healthy.

It shows that over time our net wealth has been increasing.

This is the sum of our dwellings (generally our homes) plus our financial assets (in particular our superannuation but also directly held shares etc.) minus our debt (liabilities.)

And don’t worry about the state of our property market debt .

The following graphic from Corelogic shows that the total value of residential real estate in Australia is $6.6 trillion

Remember many Australians have no debt against their homes and others have debt against income producing assets. 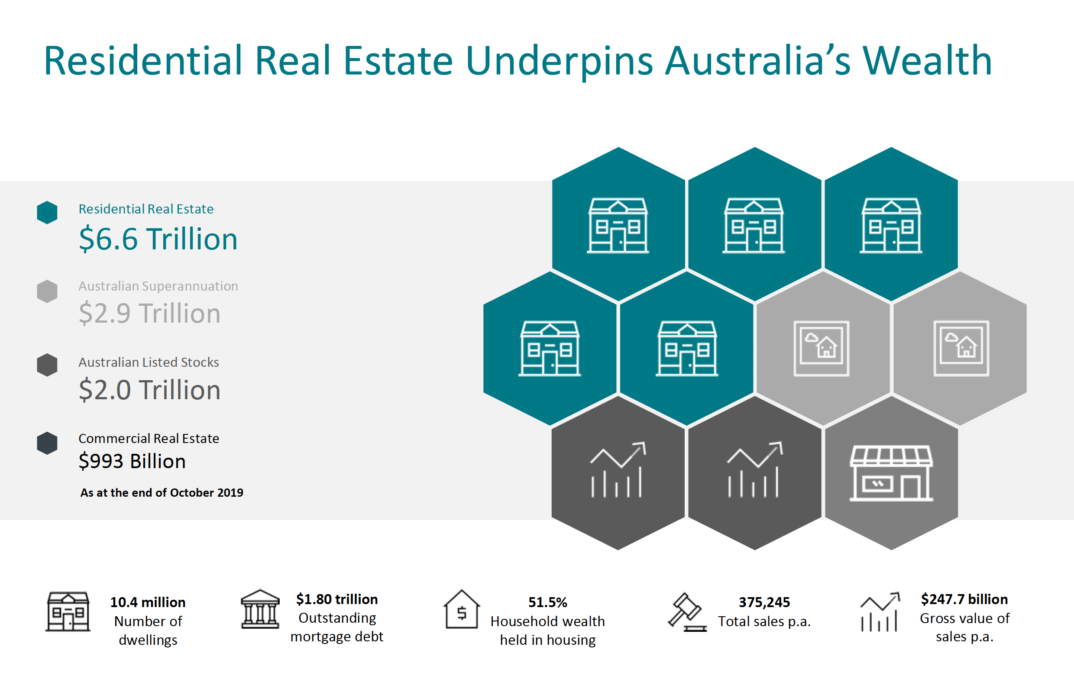 At the same time the levels of mortgage stress and mortgage defaults is very low and is really only an issue in some WA regions and Darwin – both of which have suffered prolonged property slumps.

So we have plenty of strong stable assets supporting our debt. 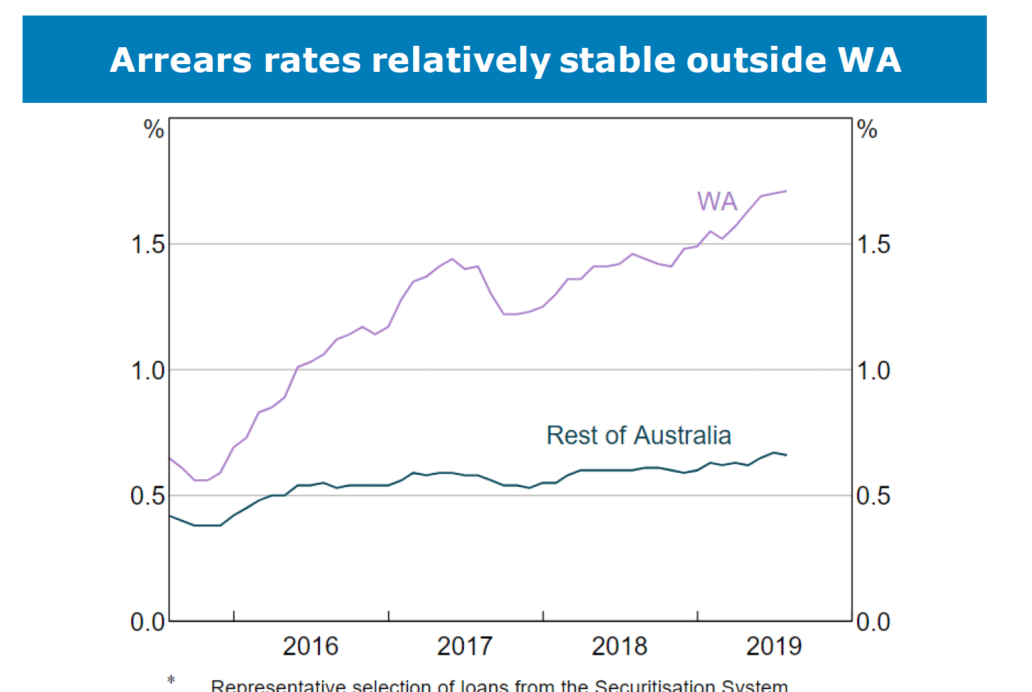 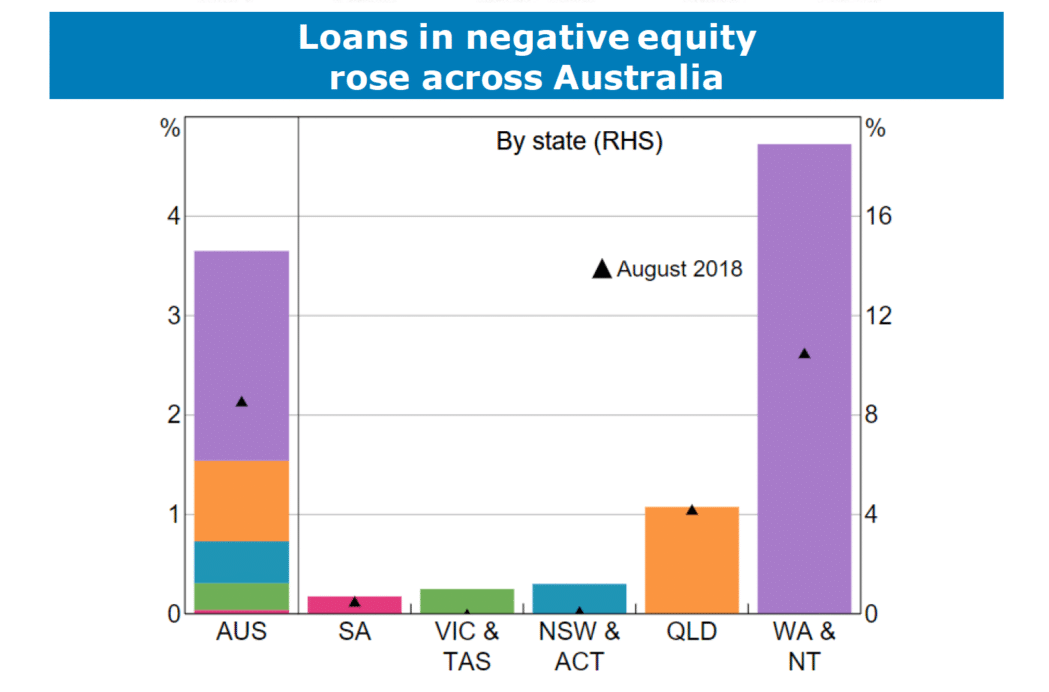 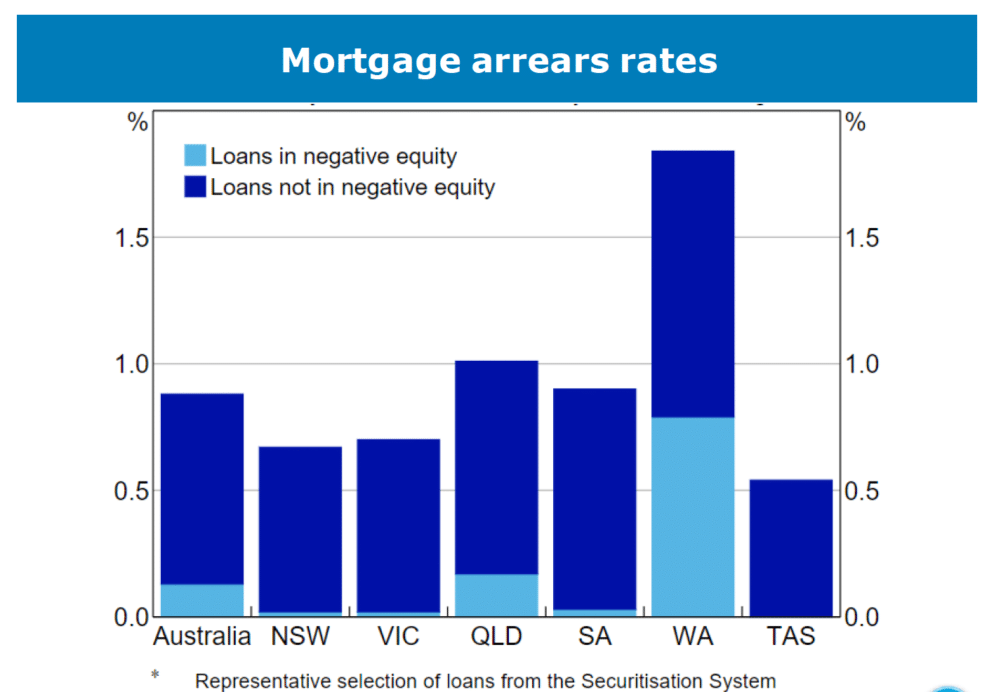 Sure our economy is having a rough time, and yes the world’s economy is in a synchronised slow down.

But the level of Australian household debt is not a problem, because it is supported by high and rising household wealth.

Now this doesn’t mean we’re not going to experience difficult economic times – clearly we’re in for a rough ride – but the level of our net household assets offers the average Australian a great buffer for any difficult times ahead.

And at present rather than spending our tax rebates or the savings from lower interest rates, many Australians are stashing their cash, paying down credit cards and mortgages. That’s a good thing.

So next time you hear a doom merchant tell you our debt is going to make the bubble burst – remember there is no “bubble” and the level of debt is manageable and not a risk to  our economy.